Back to Profile Gallery > Centro Inc. 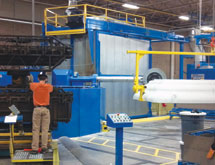 After 41 years, Centro Inc. has become the largest custom and most technically advanced rotational molder in North America.

President and CEO Brian Olesen says this is thanks to its founder’s vision to be singularly focused on rotational molding “and [to be] the best at it.”

Based in North Liberty, Iowa, the firm manufactures molded plastic parts for OEMs such as John Deere, Caterpillar and Toro. Founder Dick Rozek started Centro in 1970, when he saw the market’s need for a plastics company that specialized in custom rotational molding.

Centro has stayed true to that vision ever since and has formed longtime relationships with such clients as John Deere, which is its largest customer. “We [manufacture] products in their factories in four different locations,” Olesen says.

Centro is committed to manufacture locally where its customer needs it. The company actually operates machinery in the customer’s facilities, reducing many costs, including shipping, packaging and extra handling. “We’re the only molder I know of who [does this],” Olesen declares.

Olesen joined Centro 21 years ago. “I’ve always been in plastics,” he explains. “When I joined Centro in 1990, we were about a $10 million-a-year business.”

He notes that the company has since seen a significant increase in sales, which is largely the result of an innovation initiative that “has spurred our growth.”

During this innovation period, Centro invested in engineering and technology, including a full R&D department and industrial design, which are unique capabilities in the industry. These resources proved successful at converting products to rotational molding and delivering the best value for the customers and their customers, he says. The company’s focus on innovation is creating value in new markets, new products and in new ways.

For example, it was just awarded the conversion product of the year, as well as the product of the year, by the Association of Rotational Molders.  It also worked with Batesville Casket Co. on the design and manufacture of the strongest plastic burial vault on the market to compete with concrete.

The company’s technological advancement also includes advance quality planning and an extensive production part approval process that starts in the design phase. “[We ensure] the products we produce can be repeatedly produced within the specification of manufacturing,” Olesen says. “When it goes to manufacturing, we install mistake-proofing whenever possible.”

Centro has implemented lean manufacturing. “Our processes are lean from the standpoint [of] the elimination of inventories, value-stream mapping, looking at mistake-proofing [and] looking at single-piece flow,” he says. “[It is]  a culture that focuses on continuous improvement.”

Centro is proud of its entire staff, Olesen says. “We have a really strong, diverse leadership team that [consists of] very competent and professional leaders [who] are committed to our vision,” he says. “But for us to be successful, it takes all 800 associates in all seven locations, sharing a common vision and putting the effort into it to make it happen.”

The company also values its relationships with suppliers. “We look at our suppliers like we want to be looked by our customers – as long-term partners,” he says.

“[The] relationships that we have with our suppliers go back years and years,” he says. “We believe the importance of a relationship certainly has both parties bringing value … and making sure that the relationship is win-win.”

Centro plans to grow domestically, but has not ruled out any work overseas, Olesen says. “We have some great opportunities internationally,” he asserts. “I’ve traveled to India three times this year and Brazil twice.

“Our multinational customers have established [a] strong presence in the BRIC countries,” he explains. “They in turn would [also] like for us to bring the technology to those markets so they have a similar supply base or similar technologies as they do in the States.”