Back to Profile Gallery > Century Eslon 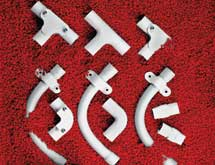 A diverse and high-quality product line for a multitude of clients matched with its own widespread distribution network sets Century Eslon apart from other manufacturers of plastic construction and industrial packaging products in the Caribbean, Managing Director Mark Lankester says. The company was founded in 1965 as a joint venture between Mitsui and Sekisui of Japan and L.J. Williams Ltd., a major trading company in Trinidad.

“Many manufacturers operate in only one of the Caribbean countries or they will manufacture in one and sell to authorized distributors,” Lankester explains. “We have our own distribution network with warehouses on nine Caribbean islands and our own sales staff on the road visiting our customers.”

Other plastics manufacturers will employ locals on the manufacturing floor, but place individuals from its corporate office in sales and management positions, Lankester points out. Century Eslon does things a little differently in its operation.

“We strongly believe in employing local people,” he says. “All regional offices are staffed by local people and not Trinidadians.

“When we open up a new subsidiary, we’ll put someone from the corporate office on the logistics side of things, but the sales force and sales management always has been local people with local knowledge and local contacts,” he explains. “There are many differences between islands, so local knowledge is invaluable to us. When we set up an office in Jamaica, we pulled back all corporate logistical support and within one year, that location was fully staffed by Jamaicans.”

“We’ve pushed to grow organically, but have been looking at acquisitions in the past couple of years because there is only so far you grow organically at the end of the day,” Lankester says. “Our first push is going to be in the French Caribbean, and then further into the Dominican Republic, Latin America and Costa Rica. We really have no choice. We have huge competitors from the Dominican Republic pushing into the region, so we either fight or we die.”

Century Eslon’s diverse portfolio and aggressive expansion plans have kept the company going strong during the recession, which Lankester says hit the Caribbean about six to nine months after the U.S. recession.

“It’s fair to say we’re bottoming out in the Caribbean,” he says. “But in the past three months, things have not gotten worse.

“Because we have warehouses in nine countries, export in 14 countries, trade in four currencies and three main product areas – general hardware stores and retail outlets, large infrastructure projects for water authorities and the beverage crate and paint pail industry – we found that we have weathered the recession very well,” he adds.

With money coming into the region from world institutions, such as European Union, World Bank or International Monetary Fund, to boost the region’s water utility infrastructure, Century Eslon is seeing increased activity for quotation requests. Lankester explains the drought that has plagued the Caribbean in recent months has created a serious water shortage, prompting local water authorities to take action.

“Unless we have extremely heavy rains over the next six months, next year is likely to be worse, so governments don’t have any choice but to push for more water infrastructure,” he remarks.

In the meantime, Century Eslon intends to place a higher emphasis on its distribution operation.

“About five or six years ago, we were a manufacturer that just so happened to distribute,” he notes. “Now, we need to put more focus on distribution, so I see us as a distributor who happens to manufacture. We’re trying to move a lot more into construction-related products that we don’t necessarily manufacture right now. Right now, about 17 percent of what we sell is what we do not manufacture; in 10 years, I’d like to see a more balanced mix as we expand our product offerings beyond our manufactured items.”

That is not to say the company intends to weaken its manufacturing capabilities in any way.

“It’s just that the cost involved in expanding manufacturing operations are more prohibitive in the Caribbean, and the cost of labor in Trinidad is regionally expensive,” Lankester explains. “Salaries in Trinidad on the factory floor are twice or three times the amount of what other countries in the Caribbean pay. The oil and gas industry has blessed the Trinidad economy in general, but the adverse effect is that it pushed salaries up closer to First World salaries instead of traditional developing world salaries.”

At the same time, building a fully automated plant is not always conducive because automated equipment produces a higher output of product, and with less than 10 million people inhabiting the Caribbean islands, there would be much more supply than demand.

“We don’t yet have the market size to justify full automation,” Lankester says. “So it means you have to have a lot of people to run the equipment, and when you look at our industry compared to our competitors in Jamaica, the Dominican Republic, Costa Rica and China, labor rates are far lower in those territories.”

Although Century Eslon has nearly 200 employees spread across nine countries, every person is valued for his or her hard work and is considered a valuable asset to the company.

“We don’t feel like we’re part of a big trading company,” Lankester says. “We don’t see employees as a number; they have a say in what the company does. A family has controlling shares of the company, which still has their input, so I think it’s fair to say that family values are a big part of Century Eslon, and it makes it a nice place to work.”

As the company expands, the more tenured employees remain an integral part of Century Eslon’s daily operations, and the new employees have appeared to follow their lead, Lankester believes.

“We don’t have a high turnover, which I think goes toward our family values system,” he explains. “We strongly believe in people who try to better themselves and help to improve the company by bringing fresh ideas and new approaches. We often pay up to 50 percent for an education course, and since the Trinidad government pays almost 50 percent of a degree, there really is no excuse not to further your education. Trinidad is one of the most proactive countries in the Caribbean when it comes to assisting people.

“Along with our employees, many of our customers have stuck with us for years, and we would not be successful without their support,” he continues. “These customers are as much as part of the Century Eslon family as any of our employees.”