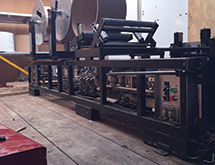 Christy Metals Inc. is not a company that believes in taking its time on its work for clients, Vice President Lance Shelton says. “We respond quickly to customers’ needs,” he says. “We also like to keep our lead times to less than a week.”

Today, it operates under the umbrella of Helms Performance Group Inc., and under the ownership of Helms’ son, President Christy Helms. In January 2014, “He bought out his father and his brother,” Shelton says.

Christy Metals has two sister companies also based in Northbrook: Chris Industries Inc., which provides metal sheeting, gutters and hangers, and Chris Plating Inc., which offers hot-dip tin. This year, “The projected sales for all three companies are in excess of $50 million,” Shelton reports.

He adds that the company’s 51-year success is partially due to its partnerships with mills. Although it provides services, small order quantities, just-in-time stocking programs and narrow widths, “[Our] strong relationships with our mills have kept us competitive in this global market,” he declares.

The electrical industry is Christy Metals’ largest customer base, Shelton says. “Automotive connectors [comprise] the second largest,” he says, noting that the company distinguishes itself by not setting a minimum requirement on clients’ orders.

Christy Metals even serves other distributors and its competition. “We sell to our competitors every single week,” Shelton says. “We’re a master distributor, which probably makes us just a little bigger than the small guys, but not huge.”

The company also benefits from its manufacturing location in El Paso, Texas. “We’ve got trucks down there in the Juarez, [Mexico], market,” Shelton says. “We’re going weekly across the border and delivering products. That’s a major growth area on the border for Christy Metals.”

Christy Metals is coping with a declining copper market, Shelton says. “[Prices are] lower this year than last year, so we’re selling at a loss to keep [our] customers happy,” he says.

“But we want to keep the inventory turning so we can bring in a lower-cost material,” he says. Nevertheless, Shelton says the company is doing well in this environment. “We keep our turns turning.”

The company also is continuing to grow. Recently, it purchased a new heavy-gauge slitter and an edging machine. “We can do edging that we couldn’t do in the past,” he says. “We’re also talking about growing even more in the El Paso area.

“Our strategy is to be open to the ever-hanging needs of the customer,” he continues. “If they say, ‘We want you to stock [a certain] material,’ we’ll stock that material.”

The company also plans to maintain high quality standards, for which it has achieved ISO 9001 certification. Additionally, “We get audited internally and externally [monthly by Perry Johnson Registrars Inc.],” he says.

Sustainability is another priority for Christy Metals, he says. “We’ve added solar panels to the top of our entire building,” he says.

The company also has switched to energy-efficient furnaces. “We’ve also changed our lighting throughout the plant,” Shelton continues. “We’ve invested heavily in the green side of things.”

Shelton has been with Christy Metals for seven years and previously worked with the company when he served as the director of sales for PMX Industries Inc.

“While I was [there], I sold to Christy Metals, so we’ve had a relationship,” he recalls.

But  Shelton did not join the company until after he had worked as the vice president of Guardian Metals in Morton Grove, Ill. When that operation shut its doors, “Everybody in the business came to Christy Metals,” Shelton recalls. “They’ve watched a lot of people come and go, but they have stayed strong.”

Shelton praises the leadership of Christy Helms. “He knows that the customer is the reason that we’re in business,” Shelton says. He also is proud of how it has grown. “We’re four times larger than we were seven years ago,” Shelton explains. “We’re also qualified now for many industries that we weren’t in the past. We’re changing to what our customers and the industry in general needs.”

“Twenty years ago, we basically just did coil,” he says. “Our product line is now drastically different.”

Christy Metals has won several awards for its work, including the Silver Supplier of the Year for a Fortune 500 Company Award from a client in 2013. At the time, “We were the only metals supplier to receive that award,” Shelton says.

Chris Plating Inc. strives to meet industries’ needs when it comes to hot-dip tinned strips. “Manufacturers in the fields of electronics, communications, automotive and aerospace technology have come to rely on the dedicated workmanship and quality-control standards executed and maintained at Chris Plating,” it says.

“We’ve been in business long enough to know the importance of personalized service, and how to deliver it,” Chris Plating explains.

“We maintain flexibility in our production schedules, allowing us to meet the most demanding delivery requirements.”

Sister company Chris Industries Inc. works closely with clients. “[Our company has] strong relationships with roofing, sheet metal and a variety of other contractors, and even helps homeowners or building owners with the function and design of their products,” it says.

“Chris is often involved in a construction, remodeling or reproduction project through conception, production and delivery.”