Back to Profile Gallery > citim AM Inc. 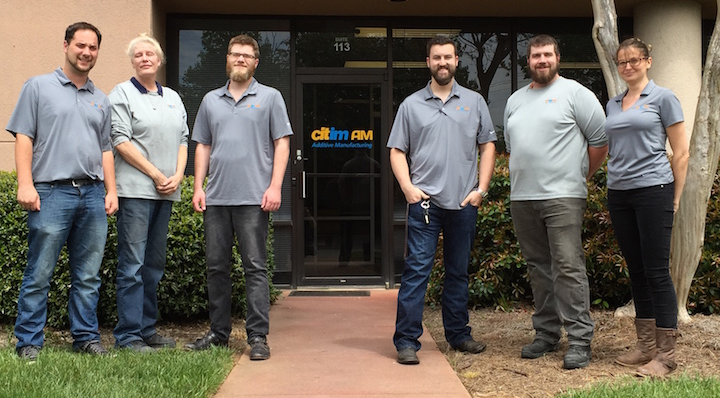 As part complexities increase, the cost of prototyping them rises, too. Methods of producing a single complex metal part to test in an assembly and possibly to refine further can be an expensive endeavor. But if the prototype part can be produced using additive manufacturing, its cost can be reduced dramatically.

Additive manfacturing is sometimes referred to as 3-D printing, but it really is a process in which a high-precision laser selectively builds up thin layers of metal powder particles. Once a single layer is completed, the base plate is lowered just enough to make room for the next layer.

This process has been perfected by citim GmbH in Germany, and since 2014, it has been available at the company’s U.S. subsidiary, citim-AM, in Kennesaw, Ga. “We are seeking a lot of customers who are looking for advantages from this technology, such as to integrate functions, or who are looking for possibilities where they can use this technology to produce a part which you cannot realize by another technology,” citim GmbH Project Engineer Peter Boettner says.

“One of the greatest advantages of additive manufacturing is that we do not need any tools, castings, machining or milling,” Boettner says. “You are very flexible in the things you do.”

If a part can be formed with another manufacturing technology other than additive manufacturing, it usually is. “Our parts in higher quantities are much more expensive than if made by a conventional technology like casting,” Boettner concedes.

Nevertheless, some special parts that could not be formed any other way are manufactured in small batches of 10 or 20 for highly specialized uses, such as for the aerospace or energy industries. Other industries that citim-AM services with prototypes include motorsports, automotive, medical and consumer goods.

Some of the metal particles used by additive manufacturing measure only 10 to 45 microns. How long it takes to manufacture a prototype or part by building up thin layers of these powders depends on the part’s size. A small part might take only 12 hours, but larger parts can take longer – one in Kennesaw recently took nine days – and consequently be more expensive. The longest a part took to be formed in Germany was 16 days.

Nevertheless, citim-AM tries to offer relatively short lead times. “That means one week in the best case, but it depends on the quantity of the part and how large they are,” Boettner says. 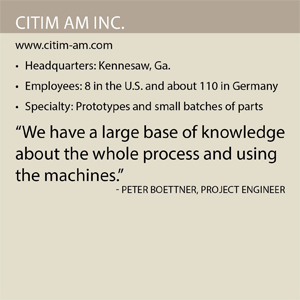 The machines have to be run under human supervision to keep them filled with metal powder and to confirm that the job is being manufactured correctly. The design of the metal structure that supports the part being formed and the way in which the part is oriented affects the success of its manufacture. “It’s much more than just pushing the button,” Boettner emphasizes. “This is why our German connection is pretty important. They can help us over there with a lot of their additive manufacturing knowledge.”

citim-AM’s parent company, citim GmbH, has years of experience with additive manufacturing. “In Germany, we started with this additive manufacturing technology in 2009,” Boettner points out. “So we have a large base of knowledge about the whole process and using the machines. I think that is one of the big advantages we have here in America because we do not start at zero.”

In Germany, citim GmbH was able to purchase at high cost the operating parameters of many materials formed in the additive manufacturing machines. “What we did in Germany was we pushed the performance of the machines,” Boettner says. “This is a big difference between us and our competitors.”

“Perhaps the walls are too thin or the holes are too small,” Boettner says. “We go back to the customer and tell them what to change. When changes have to be made, you instruct the customer to make them themselves.”

“We don’t touch the customer’s files,” Business Manager Katrin Meiser adds. “Sometimes, we only get a pdf file and they ask for a quote.” Once the file is correct, the best orientation of the part is chosen and a support designed on which the part will be formed. When that is completed, the CAD files are sent to a machine and the additive manufacturing process begins. After manufacturing, some parts require finishing, such as cleaning and hand grinding.

citim-AM was established in the United States to fill a niche in which the market for additive manufacturing of metal rather than plastic parts was underserved. “We wanted to be one of the first ones to offer this technology in larger quantities with more machines and different materials,” Boettner says. “This is one of the reasons we have opened the facility in Kennesaw – we can deliver other markets than in Germany.

“In Germany, the largest market is automotive,” he continues. “In the United States, it’s aerospace, defense and energy. So you have another kind of customer over here than in Germany. We think this technology has a pretty good future if the customers have the knowledge about it and know how to use it for their own profit.” The Kennesaw facility serves industries throughout the United States and Canada.

For the future, citim-AM plans to create additional capacity by obtaining more machines – which can cost up to $700,000 apiece – and to offer additive manufacturing of additional materials, such as copper. The company also plans to offer in the United States additional services, such as buffing out ridges in a part that were formed during manufacturing as each layer was laid down.

Whatever citim-AM’s next move will be, it will be as innovative as its business ventures have been in the past. “Our president, Andreas Berkau, is pretty good with finding new technologies and ways to bring them over to be one of the first,” Boettner concludes.