Back to Profile Gallery > Cleveland Gear 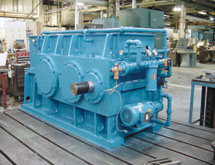 If longevity is any evidence, Cleveland Gear is a company that definitely knows its products.

For the last 100 years, Cleveland Gear has been a leader in the gearing industry in producing highly reliable worm gearing for a wide variety of heavy equipment applications.

“Our customers come to us because of our products’ proven reliability in crucial applications,” says John Atkinson, vice president of sales. “It’s not uncommon for us to see a request to service parts for gear reducers that were made by us 50 years earlier.”

Worms and their mating gears are used to transmit power and reduce rotational speeds in many types of machinery. When Cleveland Gear was founded in 1912, worm gearing was often used for rear axle drives on automobiles. As this technology was phased out of use in automobiles, the company shifted its focus to other industries. It developed the first patent for a fan-cooled enclosed speed reducer.  “We continue to offer a variety of products for heavy industry,” Atkinson asserts. “Our gearing and drives are used in overhead cranes in steel mills, coal pulverizers for electric power generation and even oil field drilling equipment.”  These critical applications require gearing and drives whose strength and durability are unquestioned.

In addition to worm gearing, the company recently expanded its offerings to include spur and helical gearing as well as enclosed gear drives designed and built to customer specifications. Cleveland Gear offers a large number of standard gear sets but can manufacture custom gearing per the customer’s designs.

With more than 1,500 hobs in stock, and its Master Worm program, the company is able to “replace either member of one of its gear sets without having to replace the entire set,” it says.

Cleveland Gear’s production range for its worm gearing also is unique in that it ranges from 3 inches to 54 inches center distance. “The largest worm gear we make is more than 100 inches in diameter,” Atkinson says. “On the smaller end, our gears can be less than 3 inches in diameter.”

Worm gears are typically made of bronze. The centrifugally cast bronze alloys provide the reliability needed by its customers. The worms are produced from either bar stock or forgings.  The worm threads are milled before going through a case-hardening heat-treating process.

“Cleveland Gear typically flame-hardens its worms,” the company says. “Flame-hardening gives the worm a high degree of hardness throughout the entire thread thickness to well below the root diameter, yet retains a core of medium hardness.”

After heat-treating, the worm threads are precision-ground. To minimize errors, both thread flanks are ground in the same set-up. Cleveland Gear uses specially designed precision thread gauges and grinders to ensure product consistency. After the threads are ground, nondestructive testing is performed to ensure the threads meet the company’s quality standards.

The gears are hobbed using a tangential feed process. “The gear tooth is generated by an immense number of different cuts that results in an almost perfect contour of the finished tooth,” the company says. “This smooth tooth profile is an important factor in a gear’s load-carrying ability, smoothness of operation and efficiency.”

Lastly, the gears are also inspected to ensure they adhere to Cleveland Gear’s strict quality standards. At this stage, “a production worm gear is checked against its corresponding master worm,” Atkinson says.  The specialized gear checking machines verify that the hobbing step was completed accurately and the contact pattern is correct.

Cleveland Gear is an ISO 9001 certified operation. One critical aspect of its operation is ensuring a high level of quality and reliability in every product it manufactures.

The company continues to invest in new equipment to improve its production capabilities. “We’re fortunate that our owners have given us the capital to upgrade our equipment,” Atkinson says. The company recently purchased a 2.4-meter gear hobber for the production of the larger worm and helical gearing. In addition, Cleveland Gear designs and produces much of its own tooling in support of its dedication to quality.