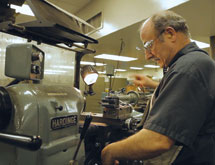 If fastening something in an airplane requires putting a hole in its structure, over time stress cracks can develop from that penetration, and the problem with drilling holes in boats – flooding – is obvious. So providing a durable method of attachment while eliminating holes is a valued technique.

Fortunately, Click Bond Inc. pioneered just such an approach, fusing structural adhesives and mechanical fasteners. “Historically, the majority of our business has been in solutions for the airframe manufacturers,” asserts Karl Hutter, vice president of sales and marketing. “But our focus is starting to take a turn, and we’re really branching out more into marine shipbuilding and offshore energy exploration. Manufacturing economies of scale have allowed us to reduce cost and approach new markets previously out of reach.”

Click Bond’s aerospace products have delivered savings and unlocked design options at both commercial and military OEMs around the globe, as well as the aftermarket for aircraft overhaul. Refurbishing and remodeling aircraft interiors is one of the largest markets for Click Bond’s products, including planes for VIPs and heads of state, or converting passenger jets to cargo handling.

“In fact, those very situations where I’m trying to add new features to an old aircraft are some of the strongest business cases for our products and have led to a lot of our company’s growth,” Hutter declares.

“The benefit our product delivers is the avoidance of a scenario where you have to penetrate the aircraft structure in order to fasten some secondary thing like a bracket or clamp to carry electrical wiring,” Hutter explains. “We eliminate the need to drill holes and instead use structural adhesives to make that attachment.”

For example, if installing video monitors into the back of airliner seats requires drilling the seat frame to route cabling, that change would have to be approved by not only the seat manufacturer, but also the OEM and the Federal Aviation Administration (FAA), Hutter maintains. Not having to drill holes in aircraft can save airlines a lot of time otherwise spent conducting stress evaluations and getting approvals.

Click Bond has been moving more of its manufacturing in-house over the years. The benefit to this initiative was seen in 2008, when Click Bond purchased one of its suppliers in Watertown, Conn., to address a market shortage of high-strength structural nutplates used in many platforms, including the Lockheed Martin F-35 joint strike fighter.

When Click Bond originally toured the ailing supplier, it was looking to purchase some of that facility’s machinery to manufacture its own structural nut products. But Click Bond soon saw the advantage of acquiring the entire supplier and keeping its engineering and manufacturing team intact.

“They had an incredible team, stable of equipment, know-how and a wonderful plant,” Hutter asserts. The supplier had been producing components for commercial lighting systems, which is a brutally cost-competitive market, he says. The high degree of competition in the lighting component industry was forcing the company into contracts at prices that were unsustainable.

“It was a wonderful addition to our family and our capability, and now that facility manufactures almost all of Click Bond’s structural nut products,” Hutter notes. “That has allowed us to move from being largely a nut buyer to a highly capable nut manufacturer.” Not only was the supply problem addressed, but the company gained added skill in precision deep drawing. Click Bond now has 85,000 square feet and 50 employees in Watertown to add to its main plant’s 300,000 square feet and 275 employees in Carson City, Nev.

“We have over the course of time continued to bring in new manufacturing capabilities,” Hutter relates.

“We do traditional machining, injection molding of thermoplastics, compression molding of thermoset materials like glass and carbon epoxy, and drawing and stamping of metals,” he adds. “We basically have seven different factories under one roof, allowing us to be very capable and manufacture nearly all of our own products and their components.”

As the industry continues to use new high-performance engineering plastics such as polyether imide and poly­etheretherketone – which require high temperatures to mold properly – Click Bond’s injection molding equipment is being upgraded. “You’re starting to see much more reliance on thermoplastics for manufacturing brackets and secondary structures,” Hutter points out. “With that has come a real need for us to expand our molding capabilities.”

The product line still requires manual assembly. “Part of that is just dictated by the way the product works,” Hutter maintains.

“We have a lot of hands-on assembly and always will,” he says. “The economic challenge is figuring out how to do it intelligently. We’ve done a lot of movement of that workflow to cellular assembly centers, where you have cross-trained teams of folks who can much more flexibly shift with the product mix, whereas previously there were individuals dedicated to performing one function.”

Other recent changes include upgrades to the company’s three priming and painting lines, which have been converted to spray waterborne epoxy coatings, eliminating emissions of volatile solvents. A fourth overhead gantry line for larger components is being installed.