A privately-owned family business, and a proud part of its local community, Clifton Packaging Group Ltd has become one of the UK’s premier manufacturing specialists when it comes to flexible packaging, packing machinery and contract packing

With market research predicting a continued upward trend in sales for the global packaging industry up to 2020, and beyond, the world of packaging materials and processes is currently one of the fastest moving, and rapidly evolving, sectors in manufacturing. Firmly established within this world is Clifton Packaging Group (Clifton). Originating in London in 1981, initially as wholesalers of plain carrier bags and paper bags for retail outlets, today the company can be found proudly situated in the city of Leicester.

Over the course of the last 36 years, Clifton has directed its efforts towards manufacturing flexible packaging materials especially for the snack food, confectionery, bakery, health food, wet protein and other FMCG markets. The company’s films and pouches are designed and created to suit the consumer’s individual needs. Its films can be clear or coloured, printed or plain, single or multi-layered, or coated, and can even be converted into pouches by utilising its Totani pouch making machine, one of the leading brands for pouch conversion in the world. These machines have the capability of adding zippers, tear notches, rounded corners and die punched handles. Clifton is the only company in the UK to possess the ability to convert shaped stand-up pouches.

The company’s pouches themselves can be made from scratch, beginning with detailed designs before proceeding to printing, lamination, coating and slitting. By investing in the finest cutting edge technology from Japan, Clifton has taken its place amongst the front runners in the field of stand-up pouches, boasting the ability to produce resealable and shaped pouches, as well as those for special applications. Its pre-made pouch range includes ovenable, spouted, retort, three-side and quad seal, side gusset, gas flush and vacuum pouches. 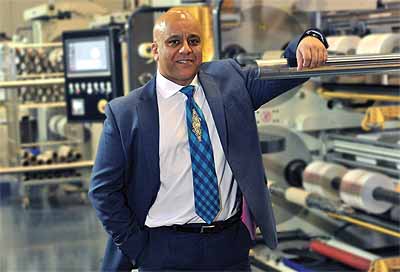 Clifton also has a long and reputable history for supplying major supermarkets with a variety of lines, utilising its packing experience to provide a wide variety of products in various formats, from confectionery to dried fruits. Accredited with Grade AA BRC, the company specialises in achieving fast turnarounds and has the ability to pack items including cereals, pulses and grains, snacks and nuts, and powders.

A further element of the business that sets Clifton apart from its competitors is the fact that it operates its own packing machinery division, Target Packaging. A specialist supplier of food processing and packing machinery, it serves customers with a one-stop-shop for their packing requirements, along with the best possible service so as to assist them in achieving their organisational objectives. Examples of the machinery that Target Packaging can supply include vertical form, fill and seal units, multi-head weighers, auger fillers, and numerous accessories such as bucket elevators, vibratory feeders, inclined screw feeders, rotary packing tables and metal detectors.

Clifton has become an expert in combining technology and experience in order to develop flexible packaging and technical innovations that provide its clients with a competitive edge in the market place. It is this ability that has contributed to its team picking up numerous industry awards and accolades over the years. 2016 in particular was a fantastic year in this regard, with the company recognised as ‘Company of the Year’ at the Leicester Mercury Business Awards, for ‘Investment Project of the Year’ at the UK Packaging Awards 2016, and winning within the beverages category at the annual WorldStar Awards, run by the World Packaging Organisation in Vienna. In addition to this, 2017 has also been a fantastic year in terms of recognition, with Clifton already winning an array of awards and it is also a finalist in the upcoming prestigious UK Packaging Awards and Flexo Tech Awards.

In the same week that the company was presented with its WorldStar Award, Clifton would also find itself named within the prestigious London Stock Exchange ‘1000 Companies to Inspire Britain’ report. A celebration of some of the fastest growing and most dynamic small and medium sized enterprises in the UK, Clifton’s inclusion within the 2017 report is a massive testament to the hard work and commitment of its people and represents further evidence that its growth strategy, inspired by the motto created by its Managing Director, Shahid Sheikh, ‘Aspire to Inspire before we Expire’, continues to move forward in the right direction.

Clifton’s desire to bring new innovations to market has continued with the introduction of its Antibac AGP (Active Guard Protection) product. Based on silver ion technology, Antibac AGP has been proven to inhibit the growth of bacteria by 99.99 per cent and has been successfully tested to ISO 22196:2011 standards against common organisms such as Campylobacter, E.coli, Listeria, MRSA, Pseudomonas and Salmonella. Antibac AGP has shown to be effective for the intended lifetime of the product that it is added to. Case studies have shown examples of this technology being used on water pipes which seven years after application were still show to exhibit antibac properties.

Similarly impressive is the recent certification that Clifton has gained for a new range of ovenable bags, which have been shown to be able to withstand temperatures of up to 225 degrees centigrade for up to two hours. Successful tests have established Clifton as the only company in the UK that is able to supply ovenable printed bags that can operate in such temperatures that are fully manufactured in-house.

As recently as three years ago, in 2014, Clifton was a company turning over an average of £10 million each year. While this would be a more than enviable position to be in for any company of a similar size, it was the vision of Shahid Sheikh to take a company that had become so successful with creating innovative solutions and products, and turn it into one that turns over £30 million within a five-year period. Already well on its way to achieving this aim, and with further products and projects on the horizon, the sky could well be the limit for Clifton.