Back to Profile Gallery > Cobey Inc. 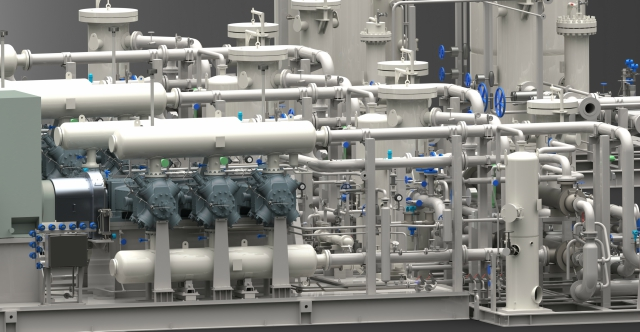 Cobey Inc. may not be as large as some of its competitors, but the company’s modest size allows it to be more nimble when meeting customers’ needs. “We’ve been able to swing from oil and gas to petrochemical to power gen or any of the different industries that utilize rotating equipment,” co-owner and Vice President Eric J. McKendry declares.

The company also can go wherever its clients need it, which can range from the Alaska North Slope to a desert in Saudi Arabia. “We’ve really had to cover it all,” he says.

Based in Buffalo, N.Y. Cobey designs and manufactures modular piping packages and auxiliary equipment for the petrochemical, energy, oil and gas, and air separation industries. Founders John Obey and Robert Castle started the company in 1987 after working in the rotating equipment and oil and gas industries.

The two formed the company’s name from a combination of their last names and focused on being a compressor packager for Worthington Industries. But when Worthington closed its doors in Buffalo months later, Cobey changed its focus, operating as a manufacturer’s representative before moving into lube oil consoles.

Essence of the Business

McKendry is a 22-year veteran of Cobey. “I started right out of college as a project manager,” he recalls, noting that he held many positions before he and President Mike Durkin bought the company.

Cobey has set itself apart in the industry with its customization, McKendry says. “It’s almost like building a custom home,” he explains. “You sit with each owner and you go through the plans and all the nuances.

“That’s the essence of our business,” he asserts. “We don’t build Cobey’s products, but we build our customer’s products for them. It’s quite an intensive engineering process.”

Cobey is coping with industry shifts, including the drop in oil prices. “There’s less capital spending going on with the oil producers, and that trickles down in a negative way to our business,” McKendry says.

This has put pricing pressure on Cobey, as well as the need to reduce its lead times. “We’re doing a good job of navigating through this time,” he says. “It forces you to be efficient and on the ball.”

Cobey coped by investing in the efficiency of its floor staff. “We make sure they have the best weld machines we can put in their hands,” he says, noting that its shops feature hole cutting and burning machines, as well as automation.

The company also invested in 3-D modeling software to squeeze out efficiencies. Because Cobey has competition in China, India and Mexico who work with inexpensive labor, “I have to counter that by having more efficient designs,” McKendry says.

Cobey has implemented lean initiatives in its manufacturing operations. “We believe in the philosophies of lean and we put a significant investment into that,” McKendry says.

“A few years ago, we looked at the whole company from soup-to-nuts with a consultant,” he recalls, explaining that Cobey looked at its processes and implemented improvements and 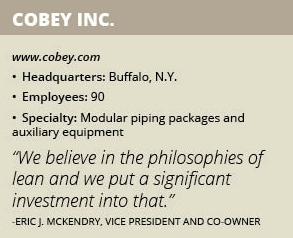 tweaks. “It was a pretty significant paradigm shift.”

For example, in sales, the company set new metrics and goals for the sales team, which allowed it to have a more diversified customer base. In the area of project execution, Cobey implemented CAD design and internal design reviews with the production and test personnel.

Cobey also streamlined its procurement process, and its metrics for project manager and shop floor productivity. The company’s long-term implementation plan for lean also continues to this day. “We’re still realizing those benefits today,” he says.

These benefits have included a cycle time reduction in engineering and design on the shop floor, as well as a high utilization of design and labor personnel. Cobey also has experienced higher throughput on the shop floor, with less rework, a reduction of inventory and improved first inspection quality, McKendry adds.

Cobey provides extensive training to its manufacturing employees. “When they’re new, there’s a mentoring process that occurs,” McKendry says. “They have to walk before they can run.”

The new employees work hand-in-hand with its seasoned employees, but even after that is completed, the training does not stop. Through its cross-training initiatives, employees are always learning new skills.

For example, Cobey may take employees who work in the electrical department and train them on fitting pipe. That way, “They can maybe spend a couple of weeks in another department that’s running behind, help our shop run smoothly and improve utilization,” he says.

“They get to learn new skills, we get to stay efficient and it helps level the staff’s load in manufacturing,” he says, adding that Cobey also provides basic safety training and rigging.

This helps when reviewing spec compliance issues that can be time consuming. “They’re accustoming to working with us,” he says, noting that Cobey also has close relationships with its suppliers of engineered components.

“It’s an incredibly close working relationship we have to have with our suppliers,” he asserts, noting that its suppliers work with its individual teams. “Rather than try to channel all project teams through one buyer, we find it’s better to [have a buyer on each team].”

McKendry is proud of Cobey and its location in Buffalo. “We’ve built a facility here that pretty impressive in our industry,” he says, noting that it covers 90,000 square feet and features 100 tons of crane capacity.

The company also has a “can-do” culture. “We have a brave group that is not afraid to take on challenges, and we get to learn stuff from it every day,” he says. “The willingness to take on those engineering challenges is really one of our marquee traits that I’m really proud of.”

McKendry sees a strong future for Cobey despite a challenging market. “We have lower cost competitors who are popping up and developing in other countries,” he says.

“The key for us is we’ve got to continue to offer engineering services along with the products we’re selling,” McKendry says. “We’ve got to help our OEM customers win.”

He predicts stabilization ahead for the oil and gas market. “We’re in the midst of a three-year downturn right now and we don’t see it coming back rapidly,” he admits. “But we do see it gradually coming back, and we’re poised to be there when it does.”

For now, Cobey plans to diversify into new markets. “The modular design approach can be applied to pharmaceuticals, plastics or other areas that we’re still trying to make in-roads into,” he says.

“Built under controlled conditions in a fabrication facility, systems are mounted on structural steel bases designed for easy and safe transport to the end user’s facility,” Cobey says. “This modular concept reduces start-up time and costs in the field, and allows the end user to take advantage of our OEM expertise and fixed costs.”