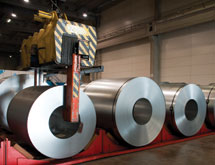 In 2008, as the real estate and stock market crashed and major U.S. automakers like General Motors and Chrysler teetered toward bankruptcy, not a lot of banks were willing to lend money. But Cole Taylor Business Capital (CTBC), the asset-based lending (ABL) division of Cole Taylor Bank, was just getting started making loans to mid-sized companies.

“We made a lot of loans when no one else was lending money,” says Michael Sharkey, executive vice president of asset-based lending for Cole Taylor Bank and president of Cole Taylor Business Capital. “We got started providing liquidity to the market when nobody else was. If you think about what was going on in 2008 and 2009, we had fresh capital, we had no legacy portfolio distracting us and we were out there lending.”

Since 2008, Cole Taylor Bank has significantly reduced its concentration of non-owner occupied commercial and residential real estate loans. “We’re still making some real estate loans, but it’s a much smaller part of what the bank does,” Sharkey says. During the recession in 2008, Cole Taylor Bank accepted federal government funds from the Troubled Asset Relief Program, which was resold by the U.S. Treasury to the public in 2012. It also independently raised $365 million of capital to finance the growth of the organization.

Now Cole Taylor Bank has a growing asset-based lending operation it started when Sharkey joined the bank in 2008. “Manufacturers fit well with what CTBC does, because we lend on assets – not a multiple of cash flow – and manufacturers tend to have a lot of assets,” Sharkey points out. “They have inventory, equipment and many times have real estate. We’ll lend a percentage of those values to the company with collateral.”

Cole Taylor Bank is primarily a lender to small middle market companies with sales of less than $500 million. “Our sweet spot is companies with sales under $250 million,” Sharkey notes. “In asset-based lending, the classic use of our working capital loans is to finance growth. CTBC provides term loans on machinery, equipment and real estate. We always do revolving loans.

“So we can turn a company’s current assets into cash faster than they would in their normal trading cycle,” Sharkey continues. “This allows the company to build even more assets so they don’t have to wait for the inventory to sell to go out and build more inventory. CTBC will lend them a percentage of those values so they’ll have the liquidity to grow.”

CTBC also provides project or acquisition financing. “If a company wants to build a new plant or product line, or acquire a competitor, we look at the strength of their collateral position, not so much the leverage of the company,” Sharkey explains. “We don’t put as much emphasis on leverage and the balance sheet. Can the company collateralize the loans properly, and is their cash flow sufficient to service the debt?

“CTBC looks more at collateral coverage,” he continues. “So our product is good for leveraged buyouts, dividend recapitalizations and growth situations. Companies may have opportunities to bring in a new customer, but they don’t have enough liquidity to gear up for it. We can provide that liquidity. Maybe the owner of a competitor is getting older and doesn’t have an heir apparent.” CTBC could provide a loan to acquire that competitor.

Leverage can be defined in two ways: as debt to worth, or cash flow debt to earnings before interest, taxes, depreciation and amortization (EBIDTA). “A lot of commercial banks get uncomfortable when debt to equity gets much over 2 to 1,” Sharkey points out. “We pay less attention to that ratio.

Cole Taylor investigates potential ABL customers thoroughly before making an offer. “We do very thorough due diligence, from the quality of management through the viability and sustainability of the product,” Sharkey emphasizes. “The historical financial performance of the companies is very important – it’s a reflection of all those intangible, behind-the-scenes-type of things.

“We also look at whether the company’s asset base can support the level of debt they want,” he continues. “Sometimes on a highly profitable company, we’ll potentially lend them more than the assets are worth – maybe up to 25 percent of the deal – if they have proven and sustainable cash flow.”

CTBC creates a 12-month detailed cash flow analysis of a potential customer’s business. “We do that to make sure that the formulas we apply to the assets are sufficient to cover their borrowing needs throughout the year,” Sharkey points out. “A lot of companies have seasonal borrowing requirements. They may have a heavy holiday or summer season. We’ll run monthly cash flows and forecast the asset level and make sure we tailor an advance-formula program that meets their needs.”

For example, a landscaping company may need to borrow 100 percent of the value of its inventory for three months annually while building inventory in preparation for the spring planting season. That advance rate might fall to 50 percent after the landscaping company has shipped its inventory and it all is in accounts receivable. “It’s a very tailored approach to lending which suits the company’s needs very closely,” Sharkey points out. “You build tolerance in so there’s room for fluctuation.”

That tailored approach is difficult to obtain from larger banks because of the preponderance of bank mergers, Sharkey declares. “When these too-big-to-fail banks buy a small regional bank, the small regional bank is probably financing a lot of smaller companies that have smaller borrowing bases and lower needs than that $5 million to $15 million range,” he notes. “These too-big-to-fail banks don’t make loans to small companies. So when they buy these banks, they look at the portfolios within them, and they start telling customers, ‘You don’t fit anymore,’ and of course, we benefit from that.”

Cole Taylor Bank looks closely at the customers of competing banks when those banks are acquired by larger ones. “We look at who they’re lending to because of the possibility that some of their customers will be asked to leave,” Sharkey maintains. “It’s not that these too-big-to-fail banks are wrong – they have their model, they have their metrics, they have their logic behind what they can do profitably at such a large institution. The fact of the matter is these smaller companies probably don’t fit. There’s no fault in that – it is just a fact of life. It’s a natural process. There are a lot of other banks around who can take care of it.”

Here for the Long Term

Cole Taylor Business Capital lends money from 12 offices throughout the United States. “So we have a good presence in the market and can serve our customers wherever they are,” Sharkey emphasizes. “We have over a billion dollars of commitments to more than 140 companies in 34 states,” Sharkey says.

The bank has been in business since 1929, even surviving the Great Depression in the 1930s. Bruce Taylor, a member of one of the founding families, is chairman.

“The bank has raised a lot of capital,” Sharkey declares. “It has grown by close to $2 billion in four to five years. It has gotten into asset-based lending, gotten firmer into commercial lending and started a mortgage company and a leasing company that are operating nationally. So it’s a good story. The bank is profitable, has a strong capital base and is here for the long term.”

Sharkey’s team of employees has been together for years at Cole Taylor Bank and a prior affiliation. “The biggest advantage we have is that the team has been together for an average of 15 to 20 years,” Sharkey points out. “So it’s a very experienced team that works well together. We all know what we can and can’t do, so we don’t waste anyone’s time. We tend to propose things that get done. The way we propose things, they don’t get changed. There’s very little disappointment in what we do. So it’s really a people business, and our people have been together for years.

“We close what we propose,” he concludes. “So when we tell a company what we think we can do, that’s what we’re going to do. We don’t change deals or disappoint people in the process. So it’s a real customer service, customer-oriented, problem-solving approach. Once we put a proposal on paper, we try to deliver that to the letter.”