Back to Profile Gallery > Columbus Castings 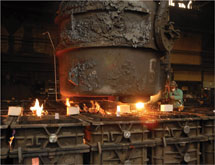 Columbus Castings, located in an urban setting in Columbus, Ohio, is proud to be the largest steel foundry in North America. Privately held by Protostar Partners, Columbus Castings says it is a premier supplier of undercarriage and end-of-car components and systems for the rail industry.

In addition to its railroad heritage, Columbus Castings manufactures complex, large-scale steel castings for the mining, construction, agricultural, hydro and turbine power generation industries. Equipped with 19 miles of Class 1 Rail access and the capacity to produce parts ranging from 100 to 70,000 pounds, its mission is to consistently strive to exceed customer expectations by continuously improving safety, quality, delivery and productivity.

Columbus Castings’ recently celebrated its 110th anniversary in 2012. The new executive team, led by Rick Ruebusch, president and CEO, is positioning itself for the next 110 years by building on its impressive achievements to date, complimented with an ever-increasing product portfolio. The company has taken on a renewed focus to deliver a constant stream of innovative, best-in-class product supported by numerous domestic and foreign patents as well as a plethora of international trademarks. Recently, Columbus Castings received the prestigious honor of being the first and only foundry to date to complete all necessary testing to conform to all AAR (Association of American Railroads) requirements for knuckle production with the launch of the Z Knuckle™.

With unwavering drive, the diverse, expert-driven operations team is blazing the trail to deploy the latest lean methodologies within the business, driving the lowest cost and best lead time in the industry. By using the unique ability of the company’s Industrial business unit to manufacture complex, large castings, Columbus is utilizing a dynamic and diverse engineering team to expand its production into the power generation, hydropower, architectural and structural markets.

At the same time, the company holds true to its heritage. Numerous employees in all areas of the business – from production up to management – have been employed with the company for more than 20 years, proving that the workforce can stand the tests of time and change. There is evidence of the company’s history throughout the facility: photos of the foundry in the early and mid-1900s, plaques celebrating employees who served in the armed forces, and a banner proudly celebrating “110 Years of American Excellence” at the main entrance.

Columbus Castings understands the value in building a strong team on all levels, but knows that strong leadership is essential in the current economic climate. Columbus Castings is pleased to announce that it has made two recent additions to its leadership team in an effort to continue to build on a solid legacy.

Protostar Partners Managing Partner Joe Haviv recently announced the addition of Mr. Jack Thomas to Columbus’ Board of Directors. A leading figure in the rail industry for more than 40 years, Thomas started his career in the 1980s, and has worked at Milwaukee Road Railroad, Trailer Train Co., Chrysler Rail Corporation, and retired from First Union Rail, where he was president and a member of the AAR Associates Board of Directors.

“Jack brings an enormous wealth of commercial experience and expertise in the railroad industry, and in driving corporate excellence,” adds Rick Ruebusch, president and CEO of Columbus Castings. “We look forward to his contributions and guidance in our continued efforts to capture higher levels of performance and customer service.”

“Columbus has made exceptional progress over the last few years, and I am excited to join the board of directors as the company looks to take the next step in its development,” Thomas says. “I look forward to working … to establish Columbus Castings as the best steel foundry in America.”