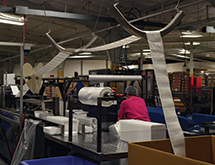 Commodore Plastics LLC did not get to where it is today by settling for the status quo, and its dedication to customized foam equipment is what continues to set the company apart. “We don’t show a customer what we have, we ask them what they want,” President Brad Braddon explains.

The Bloomfield, N.Y.- based company was founded in 1980 by Braddon’s father, George Braddon, after he realized there was a need in the market for foam products that the larger companies were ignoring. Commodore specializes in manufacturing meat trays for food processors and grocery stores. “I would really characterize us as a producer of food packaging,” Braddon says.

Since its inception, Commodore has been building its own manufacturing equipment to make foam packaging products and today the company also sells its machines only overseas.

“The reason that we build our own equipment is because we aren’t a giant company, and to be competitive as a smaller company we run custom equipment that allows us to have a full product range like our competitors do,” Braddon explains.

Commodore manufactures all of its foam packaging trays in its New York plant and works with food processors throughout the United States. The company sets itself apart by customizing the tray to fit its customers’ needs. “We don’t care if they want something that is different than what we have already,” Braddon explains. “The reality is, many customers want a different tray.”

Orders are customized mostly because a company wants its product to be displayed differently or its product doesn’t fit well in an available size tray. Commodore’s engineering department is quick to build a prototype and can prototype a new tray  in about one week.

Commodore is often making new products and the features on its thermoform machines are designed to change quickly between items being produced. “We consider efficiency by how we are able to deliver the product to the customer the way they want it,” Braddon explains.

Being efficient at Commodore means achieving low scrap percentages and fast line change over during high-volume production. Most of its trays are packaged with use of packing aids rather than by automated equipment. All of its scrap is 100 percent recycled because it goes back into making trays.

“One thing that makes it environmentally friendly is that we take a little plastic and make a lot of tray,” Braddon adds.  “If foam was invented today instead of 1960, people would probably love foam as a creative way to light-weight,” he adds. “Anywhere a company can foam a plastic, they are doing it.”

Since the middle of first-quarter 2014, Commodore has been manufacturing coffee cup sleeves. The foam coffee sleeve weighs about two grams, which makes it very lightweight, and foam is also a great insulator. Commodore is working to develop a foam label that will prevent a person’s hand from getting hot or cold when holding a drink or heated meal. Braddon’s goal is to see the foam label be used in the beer industry in the future. “I see ourselves still serving food processors in foam trays,” he adds. “Our intent is to grow in the processor segment because right now, I think we are making the best processor tray in the industry. We are also looking for opportunities for growth.”