Back to Profile Gallery > Continental Hydraulics 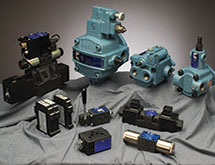 Although its roots date back to 1962, the Continental Hydraulics that exists today was born just a few years ago. The company manufactures valves, pumps and power units used in heavy industrial machinery such as food processing or mining equipment. In 2011, Continental was acquired by Duplomatic Oledinamica, an Italy-based manufacturer specializing in the hydraulics market. The new parent company recognized Continental’s strength in  pump design and felt Duplomatic’s strength in valve design would make the two a good match – allowing both to showcase a broader product offering and gain better positioning in international markets. Duplomatic also sought to revamp Continental’s manufacturing process and company culture, making it a stronger 21st century competitor.

“The company has been under new ownership for three years now with a new investment plan and focus,” explains Kevin O’Neill, vice president of Continental Hydraulics Operations. “With the purchase started the investment in equipment, people and training processes.”

Continental has spent more than $2 million in the last two years on capital investments. Because a large number of its products are custom-ordered high-mix, low-volume products, Continental needed its equipment to handle an ever-changing manufacturing schedule efficiently.

“Previously we had equipment in place, such as large machining centers and lathes, that were not process capable and were not flexible enough to meet the requirements of our customers and markets,” says David Zimmer, president of Continental Hydraulics. “We were trying to keep up with machining problems instead of running how we wanted to run.”

Continental got rid of old equipment, all of which were at least 25 years old, and brought in state-of-the-art pieces. The company installed medium-sized and large machining centers. Both are fitted with pallet systems that allow them to run unmanned at night. It also increased its lathe capacity and installed a new paint booth. Next, the company will look into adding lapping, grinding and honing machines to achieve tighter tolerances on its parts. Zimmer says the investments have allowed Continental to bring once purchased critical components back in-house for manufacturing.

“When we think about our strengths, we wanted our manufacturing to be focused on turning parts in-house that are critical for us,” Zimmer explains. “The new lathes give us the flexibility to focus on our low-volume, high-mix parts and contract the consistent stock parts to outside suppliers. We look at the strengths of others in the market to see what we can send out and what we need to take control of.”

The new equipment investments have given Continental better control over the quality and lead times of its critical products. It’s also helped the company reduce rework and scrap, resulting in cost savings.

“In 2012, our scrap dollars were horrendous,” O’Neill says. “But we have cut that in half now and we continue to reduce scrap and make improvements. We’re still not satisfied and have more work to do, but our scrap has come down incredibly in the last three years and our overall productivity and efficiency measures have gone up year over year, sometimes 2 to 3 percent and as much as 8 percent. Some of our equipment is still new enough that we are still fine-tuning them, so we will continue to see benefits in 2015 from equipment purchased in 2014.”

In addition to equipment improvements, Continental has made improvements to its company culture, as well. Duplomatic has carefully introduced new management staff since it came into ownership. The management team has developed a culture of accountability where expectations are clearly defined and progress is measured. Continental adopted the X-Matrix template as a lean tool to help it plan key objectives.

“We’re getting numbers in at the end of the month, making sure we’re hitting our targets and deciding corrective actions if we are not hitting our targets,” Zimmer says. “It’s building a fact-driven decision-making culture for our company.”

O’Neill explains that the lean tool ensures Continental Hydraulics is focusing on the right objectives. “Just by doing that we’ve seen cost reductions in how we run the business and how we make decisions in purchasing, scheduling and maintenance,” O’Neill says. “We’re finding that those things are adding up to great returns on our investment, as well.”