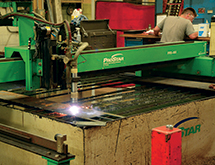 After nearly 90 years, Continental Machines Inc. has established a strong record for manufacturing quality, Marketing Specialist Brian Sorenson says. “We’ve got machines out in the field that have been there almost since day one,” he declares.

Continental Machines’ customer base ranges from small machine shops to worldwide manufacturers of industrial equipment, Sorenson says. “We have a fair number of military installations [as clients], too,” he adds.

Thanks to Continental Machines’ high level of manufacturing quality, some customers are still using its saws from the 1940s. “We have documentation going all the way back to day one,” Sorenson says. “If someone has a machine from the 1940s, they can still get parts for them and service them.”

It maintains its quality with rigorous standards. “Everything is quality checked, from the initial welding process to … before it gets shipped to the customer,” he says.

Continental Machines also utilizes automation, state-of-the-art software and lean manufacturing practices. “Everything is laid out in the most effective way when we’re manufacturing our parts,” Sorenson says. “We are really diminishing how much material we’re wasting.”

It also can manufacture parts on demand efficiently, Sorenson says. The span of time between when the part is ordered to when it is shipped “has really decreased,” he states. “That’s a huge plus.”

Continental Machines keeps a well-stocked inventory. Often, it will get orders where “it doesn’t make sense for us to build just one,” he says. “It’s more cost-effective to build a few parts for that line of machine and have those ready to go when those orders do come in.”

Like many in its industry, Continental Machines saw a drop in its business during the 1980s and 1990s as clients went to overseas vendors. “Now, the costs are kind of balancing out where it’s becoming just as affordable again to manufacture in the United States,” Sorenson states.

“We’re starting to see an uptick in sales,” he says. “We’re doing everything we can to establish ourselves as the company you want to be in business with when it comes to purchasing your sawing equipment.”

This strategy includes promoting its status as an American-based company that has operated in Minnesota for its entire history, Sorenson says. “People here have a really strong work ethic,” he declares.

Continental Machines’ headquarters in Savage also gives it advantages in shipping, Sorenson adds. “We can ship a part from here to the East Coast in a day or two,” Sorenson says. “That’s huge from a service standpoint.”

Sorenson joined Continental Machines in February, after working in advertising and marketing for the past 15 years. He is proud of the company’s manufacturing employees, who are flexible in their work.

“They’re not tied to being able to operate just one machine,” he explains. “They can bounce around and handle different areas of the plant. That’s really helped us.”

If a worker is absent because of illness or vacation, another can easily take over that person’s work, Sorenson says. “It’s not like there’s one area shut down for ‘x’ amount of days,” he says. “[We] can jump in and handle things.”

The future looks good for Continental Machines, Sorenson says. “There’s a lot of competition out there, but on the engineering side of things, we have an amazing team of engineers that are constantly improving every machine in our line-up,” he says.

With its decades of experience, “We’ve gotten a really firm handle on what the market wants as far as machines in short order,” Sorenson says. “That’s really helped us cut down on lead-times.”

From its location, “It’s an equal distance to either side of the country,” he says. “It’s not like we’re located on either coast.