Back to Profile Gallery > Convergent Photonics 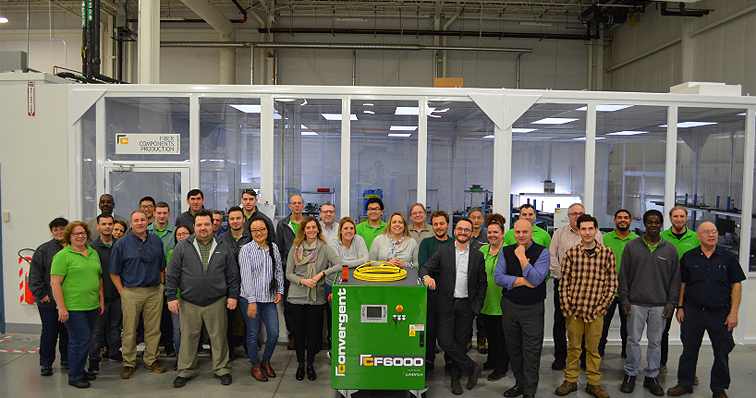 Customization and reliability have kept Convergent Photonics thriving with its industrial lasers.

Convergent Photonics manufactures three types of lasers for industrial purposes: CO2, Nd:YAG and fiber. The lasers are used in the automotive, aerospace, transportation and energy sectors.

There is quite a bit of competition in the industrial laser field, Operations Manager Michele Ronco notes. “Especially now with the fiber laser,” he says. “The technology has become widely accessible to more competitors, especially overseas. There is a big stress on price and performance.”

Convergent Photonics separates itself from the competition in several ways. “We are strongly vertically integrated,” Ronco says. “We have a product line that is mass produced and we can [also] customize the laser based on client application. We control the software and electronics and provide the full system for many applications such as micro-drilling, 3D printing, sheet metal cutting and welding. We are actively and continually improving our lasers to provide top-notch performance and reliability for our customers.”

Reliability is key. If a laser stops working on a production line, lost time could quickly become very expensive for the client. “It’s like driving a car,” Ronco says. “You don’t want to have a breakdown in the middle of the road.”

Convergent Photonics was founded in 1961, shortly after the invention of the laser in 1960. The company is owned by Prima Industrie near Turin, Italy.

The market for lasers has changed since Ronco started with the company 12 years ago. “When I started, there was basically no fiber laser in the industry,” he says. “Our market was dominated by CO2 lasers. Then fiber lasers basically took over in 2014.”

Fiber lasers have a smaller footprint and are basically maintenance-free thanks to a lack of mechanical parts and optics that don’t need to be changed after a certain number of hours.

The advent of fiber lasers was a gamechanger in Convergent Photonics’ industry. “We had to completely change our product portfolio and the way we were making lasers,” Ronco says. “Many other companies went out of business.”

The change wasn’t easy. Ronco compares it to the switch from combustion engines to electric in automobiles. Although hindsight is easy, knowing where to invest at a time of change is uncertain, he explains.

In November, Convergent Photonics will present two new products at the FABTECH Conference in Chicago. One is the 10WK laser, which is a higher-powered fiber laser. “There is a push in the industry to go to higher power levels,” Ronco says. “You gain speed at higher thickness.”

The other is the CS450, which is used for additive manufacturing. Additive manufacturing involves adding metal layer by layer. “It’s like a 3D printer but instead of plastic you use a laser on an existing part to add material,” Ronco explains. “Layer by layer, you build the component you want. You can achieve very complicated geometry. It is used in automotive and aerospace primarily.”

Trade and Talent
Recent tariffs have led Convergent Photonics to perform a balancing act with inventory. “It’s a critical part, especially now with the technology cold war between China and the United States,” Ronco says. “The last one-and-a-half years have been interesting. We are trying not to be too dependent on supplies from China. One challenge is to manage changes in the trade position between the United States and China. The other challenge is to avoid obsolescence in the electronics.”

Finding people with the right skills to design, build and test lasers is challenging, Ronco says, so the company usually trains its own fiber laser experts. Convergent Photonics works with a local technical community college, where it gains student interns who have studied laser technology. “They earn an associate’s degree and can work for us as assemblers and engineers,” Ronco says.

Power and Applications
For the future, Convergent Photonic has two aims. First, “To keep diversifying the offering of fiber lasers in terms of power levels and the applications you can do,” Ronco says.

Second, the company is exploring 3-D printing and medical applications. “We are being innovative in order to enter these markets and provide the customer with better solutions.

An example of innovation took place about three years ago when, instead of buying two lasers, a client wanted to buy a single laser that could be director to multiple welding stations along a production line. “The customer can better utilize the laser without incurring the high capital expense [of two lasers] up front,” Ronco says.

Convergent Photonics designed and built such a laser, which pleased the client. “They are now looking to retool and are planning to buy more lasers from us,” Ronco says. “We delivered a higher-value solution in terms of reliability and productivity.”

Convergent Photonics has been in existence 58 years. There are several factors that have contributed to its longevity.

“Being part of a strong group, which is a leader in the manufacturing of lasers – it helps to sustain us during market volatility and changes in the marketplace,” Ronco says. “Also, our flexibility to be innovative and quick to respond to the direction of the market” helps as well.

For the future, Ronco anticipates an increased focus on additive manufacturing. “It will probably have a big impact on the way people have traditionally built parts, which is to remove material from one big block,” he says. “Now the way is to build the part from scratch, layer by layer. You add material rather than remove it.”

That is quite a switch. “You have centuries of consolidated design thinking to design parts in assemblies by removing metal, drilling holes and joining parts together with nuts and bolts,” Ronco says. “It’s going to take quite some time to have a new generation and a new way of designing parts. That’s what tomorrow will bring us. We are basically ready for it.”