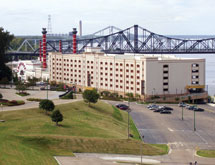 There are many divisions of Coreslab Structures throughout Canada and the United States with the ability to provide manufacturing and installation. These divisions continuously working together to deliver the best projects by relying on the varied expertise each of the company’s offices brings to the industry.

With its centralized location in Oklahoma City, Coreslab Structures (OKLA) Inc. can call on a variety of nearby sister offices to bring the best of the corporation’s U.S. operations to the table for projects within its region.

For instance, if Oklahoma Sales Manager Robert Shade pursues a project that has hollowcore requirements and is unable to produce those specifications at his own plant, he can reach out to the New Mexico division for assistance. Also, if the Missouri division requires assistance in a project, the Oklahoma facility is close enough to help assist this sister plant, as well.

“Because we’re centrally located in the United States, we’re able to reach out to our sister plants to ask for assistance as well as provide assistance,” Shade says. “With all our partners surrounding us, we can divvy up a project to make sure a client is serviced properly.”

Coreslab Structures (OKLA) operates as far north as Wichita, Kan., as far east as Arkansas, and as far west as Amarillo, Texas. This division is a full-service PCI-certified plant specializing in architectural and structural precast concrete. With the ability to provide transportation and installation services, Coreslab can deliver a variety of projects and utilize many prefabricated concrete products.

According to Shade, one of the biggest advantages Coreslab Struc­tures has over traditional concrete contractors is the fact its products are manufactured in a controlled environment long before they arrive at a job site. This gives Coreslab Struc­tures a better grasp of quality control, and its products do not have to take up space at a job site until they are ready for installation, which helps a project’s overall efficiency and is proving to be green.

“We deliver it, put it up and in a very short time, the contractors are out there doing their thing again,” Shade says. “It kind of surprises the general contractor sometimes. We’ll ask when they need it, we show up and, before they know it, there it is.”

Shade says 2011 was a down year for the Oklahoma City division, which forced the division to reduce its work force by more half.

However, the division was able to work through the economic times by breaking into the above-ground shelter market in regions particularly susceptible to tornados. Corelsab (OKLA) now is adept at delivering FEMA 361-designed shelters, typically used for gymnasiums and multipurpose rooms that double as safety shelters during tornados.

Shade says his division focused on these structures when the competition for other work grew too competitive to pursue. The shelters accounted for approximately 30 to 40 percent of the division’s revenues in 2011.

“The competition got very fierce because everyone was hurting,” Shade says. “If it wasn’t for [the shelters], last year would have been pretty harsh.”

The rest of the 2011 revenue stemmed from the structures Coreslab typically delivers when the economy is in a state of normalcy. Shade says the company can produce a variety of textures, as well as add any additional amenities to its products, including brick facades, tile or insulation.

Although 2011 was a trying year for Coreslab (OKLA), Shade says signs of economic recovery revealed themselves around November. Since then, the division has grown a backlog of projects that will keep the company stable through 2012.

“It’s much better than it was, and we’re starting to hear of a few large projects,” Shade says. “No matter what they choose, we’ll draw up a precast design, give a good number and, hopefully, we can continue to increase our volume.”