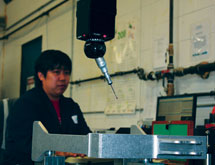 For Cormer Group Industries Inc., things are moving along quite nicely these days. In fact, the aerospace and defense manufacturer is expanding and opening two new plants in North America. Several new aerospace contracts and another new defense contract are fueling the company’s current growth.

Its 35,000-square-foot, growing to 80-worker Miramichi, New Brunswick, facility is opening this September, and a 60,000-square-foot, growing to 200-employee factory is slated to open in Querétaro, Mexico, in 2014. The new facilities demonstrate the execution of Cormer’s strategy of globalization, says Leo Sousa, president of Cormer Group Industries and operations manager and president of Cormer Defense.

The New Brunswick location is near a cluster of defense companies in Atlantic Canada, and the Querétaro location in central Mexico has become an aerospace manufacturing stronghold, providing opportunities for Cormer Group to continue and to expand its business relationships. For example, Bombardier, the No. 3 global aerospace manufacturing company, employs some 1,800 people at the site near the Querétaro airport. It moved there in 2007, and Héroux-Devtek Meggitt and Messier-Dowty followed it to the location.

The Miramichi site, on the other hand, was announced early this year with Bernard Valcourt, associate minister of state, and Premier David Alward, on hand. “This project will bring significant economic benefits to this region and will help create jobs and wealth for the greater Miramichi area,” Valcourt said.

Military land vehicles’ drive-trains will be produced, retrofitted and repaired at the Miramichi site. “Miramichi’s world-class, skilled workforce has made this region a destination for global industrial leaders, and I am pleased that Cormer Defense has chosen to grow in Miramichi and New Brunswick,” Alward said at the time. “This investment fits our focus on job growth in the aerospace and defense industry, which is one of our areas of priority. I am confident this dynamic addition to the sector will result in subsequent spinoffs and further opportunities in this important industry.”

The light armored vehicles (LAV and Stryker) are the most widely used platform of both and Canadian and American ground forces. The eight-wheeled LAVs are manufactured for tactical and theater combat events, and can transport 4 to 16 soldiers, depending on the model. The top-tier company has helped build thousands of LAVs over the past two decades, Sousa notes.

The company ranked 44th on a Canadian Defense Review listing of the top-50 Canadian defense contributors this year. In the prior year, it ranked 50th, reflecting its continued growth and ability to execute.

On the aerospace side, Cormer manufactures metallic structures and assemblies for commercial aircraft airplanes. Cormer continues to be successful with its strategy of vertical integration. Not only does Cormer manage the supplies, machine and assemble the components, but Cormer also has NDT (non-destructive testing) and post-processing capabilities. This integration is the key to Cormer’s success and is always part of its tactical plans.

Finding the best workforce exactly when they are needed is challenging as the company’s operations scale up Sousa says.

Nonetheless, “We have had success at attracting excellent people in the industry,” Sousa says