Back to Profile Gallery > Craig Technologies 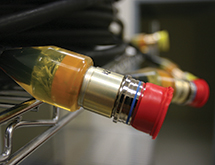 Although the company has been around for 15 years, the founder, CEO and CFO of Craig Technologies, Carol Craig, says these days remind her of the time when her company was a fledgling start-up. Craig started the company in 1999 as a one-woman consulting firm, leveraging her background in engineering and technology to assist various companies. In 2003, Craig learned about and applied for the various federal designations that applied to her business – Minority-Owned, Service-Disabled Veteran-Owned, Economically-Disadvantaged Woman-Owned Small Business and Small Disadvantaged Business.

“I started off as an independent consultant but at the end of 2002 is when I decided to make this a real company,” Craig explains.

Craig Technologies got into specialty manufacturing by offering prototype support to its existing customers. Craig says the plan was to keep its manufacturing small with only six or so machinists working in that department. But last year, the company saw an opportunity to grow its manufacturing that it could not pass up. United Space Alliance LLC in Florida was closing its doors, and NASA sent out an RFI looking for a company to take over thousands of dollars’ worth of equipment at no cost.

The center’s name reflects two of the major industries served by the new center, but Craig explains that it still supports the same industries served by its engineering operations, including energy, transportation and other commercial sectors. Diversification, she says, has always been a main business strategy for the company and a key to its success. But even though the company knew who it wanted to serve – everyone – Craig says in the last year it has focused on exactly how to serve them.

“We took over this facility in 2013 so on the manufacturing side, it feels like a startup again, but a startup that is rapidly growing with a 700 percent increase in revenue and employees in the last year-and-a-half,” Craig says. “We now have all this equipment, so the question is what do we want to do with it. It’s been a year of us figuring out who we want to be, so now we’ve figured out what we are going to be when we grow up. We’ve focused on certain capabilities, pushed away others and considered our options as far as the type of customers we want. Now it’s a matter of growing from a business development standpoint and finding the right talent.”

Craig Technologies’ first contract is to work with SNC engineers to design and develop a critical part of the ground support equipment (GSE) known as the cradle, a mechanical device used to lift, transport and rotate the Dream Chaser spacecraft during processing. SNC says it chose to team with Craig Technologies on its Dream Chaser program because of its depth of human spaceflight experience coupled with its end-to-end design-to-production capability.

“To partner with the SNC Dream Team who marries ‘innovation with passion for the mission’ provides us an opportunity to fulfill our vision to further strengthen the Space Coast community,” Craig explains. “We are fortunate to help act as a bridge between the world-class manned spaceflight infrastructure that is the Cape Canaveral legacy and the next-generation, cutting-edge spacecraft made possible by the dynamic innovation of commercial enterprise. It’s an honor to be a part of the Dream Chaser Dream Team.”