Back to Profile Gallery > Creaform 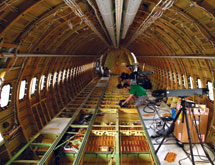 By its own admission, the Creaform team believes that nothing is impossible. The Canadian company with a worldwide presence has redefined the way metrology is performed, introducing cutting-edge portable 3-D measurement and analysis tools that help its clients do their jobs faster, easier and with a higher level of accuracy. How is that possible? Through passion-fueled creativity, according to Creaform.

In a way, 11-year-old Creaform re-invented the wheel. While other companies were developing tools that would only perform accurately in stable environments – both in terms of the work surface and temperature – Creaform came up with a method that used the object to be measured as the point of reference. This resulted in more accurate results even in non-stable environments such as workshops.