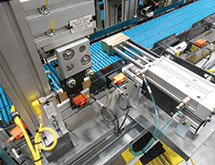 For major manufacturers such as GM, John Deere and Hitachi, automation is what keeps their production facilities operating at the levels needed to maintain their positions as global leaders. These companies need a partner that provides automation solutions they can count on to bring maximum efficiency and effectiveness.

In many cases, these and other giants of the manufacturing world turn to Michigan-based Creative Automation Inc. a RIA-Certified Robot Integrator With facilities in the United States, Mexico and China, Creative Automation has the global reach necessary to serve many of the world’s most prominent manufacturers, and the company says its approach to developing custom-engineered turnkey automation solutions has been key to its success.

The company was founded in 1994, when owner Bernd Walter purchased the U.S. material-handling division of an automation solutions provider. Although the original focus in those early days was on gantries and pick-and-place systems, Creative Automation’s scope has broadened over the years, adding robots, vision systems, RFID and other technologies to its portfolio. Today, Creative Automation provides equipment including robots, conveyors, palletizers, deburring systems, dispensing units and other automation solutions to a diverse client base around the world. In addition to its 50,000-square-foot manufacturing facility in Michigan, the company has sales and service offices in China and Mexico.

No matter what type of automation solution its customers require in their facilities, Creative Automation is focused on providing them with the systems that meet their exact needs, be they turnkey or smaller subsystems. This is made possible by the staff of knowledgeable and experienced engineers the company brings to each project as well as the highly skilled shop workers who bring the systems to reality. This gives Creative Automation’s customers a degree of confidence that wouldn’t be possible with other providers. “We are detail-oriented and take care of the customer throughout the process,” President Bernd Walter says.

Creative Automation’s experience in assembling custom-engineered automation systems puts it at the top of the industry, and results in systems that work together in harmony. “While the individual components of an automation system are easily obtainable, the true value comes in making them work together,” according to the company. “With our solid background as a systems integrator and 20 years of experience in automation, Creative Automation Inc. can provide a variety of applications, including complete automation systems, conveyor system, machine tool loading and unloading, and palletizing of blanks, finished parts and packages.”

By working together with a variety of leaders in automation such as conveyor systems supplier Altratec Montagesysteme GmbH, allows Creative Automation to bring the most sophisticated technology in the world to its customers’ facilities.

Given the highly technical nature of the equipment Creative Automation designs and builds, keeping up with the ever-changing state of technology is the company’s greatest challenge. Specifically, making sure the company’s personnel are all kept up to speed on the latest technology is its top priority. Walter says, “You have to have people trained for that.”

Creative Automation is being proactive about keeping its employees up to speed. Walter says the company has established training programs aimed at educating employees about the newest developments in automation technology, and, the company regularly sends employees out for training from third-party providers.

Incorporating new technology is another way in which Creative Automation is working to stay on top of the competition, and the company always is looking to build on its past success. “We continuously improve our products, and therefore satisfy the requirements from the customer,” Walter says.

Currently, Creative Automation is deepening its expertise as an integrator of vision systems, as well as RFID technology and plasma treat systems. By adding to its capabilities, Creative Automation it putting itself in a better position to serve its customers well into the future. “We will grow with the business,” Walter says.