Back to Profile Gallery > Creative Automation 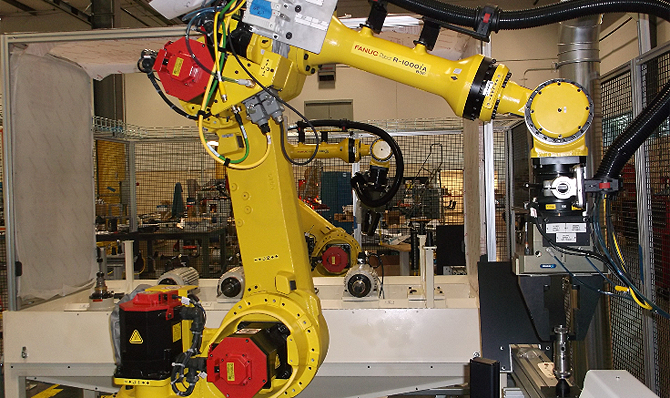 When it comes to turnkey automation solutions, Creative Automation has been at the top of its game for a quarter of a century by focusing on innovation and state-of-the-art technology.

This year, the Whitmore Lake, Mich.-based company is introducing a new standardized prepacked robotic solution for loading and unloading machine tools. In addition, it has unveiled a new Otto self-driving vehicle (SDV) for transporting materials around a warehouse or plant.

“Automation has come down in price over the past few years,” President and COO Gerd Walter says. “Now non-traditional users, such as construction companies and smaller manufacturers, are becoming a growing market for us.”

Creative Automation, which is celebrating its 25th anniversary this year, specializes in machine tool loading, material handling and packaging solutions for multiple markets. It is known for its ability to design, build and program a system to produce custom-engineered solutions.

Age Of The Robot
Since robots are an increasingly inexpensive and flexible automation solution, the company is seeing an increase in demand for its uses.

Creative Automation is experienced at integrating robots for a variety of material handling functions, from palletizing to machine loading. Its custom solutions include machine tending, deburring, dispensing, palletizers and vision systems.

Robots can also be integrated with other systems such as vision or gauging to increase the flexibility and efficiency of your manufacturing cells.

It goes beyond the current standard integration applications and offers customers a compact and standard loading and unloading system under one roof.

“It’s a standardized prepacked robotic solution to load and unload machine tools,” Walter says. “It’s a good quality and low-cost solution for smaller manufacturers who don’t have any real automation yet. This inexpensive solution will get them automation, reduce labors costs and boost productivity. I see the Boxy Autoloader as taking off.”

Another new product that Creative Automation introduced this year is the Otto Self-Driving Vehicle (SDV), designed for large warehouses and factories. It is an upgraded version of the company’s AGB (aboveground biomass) automated vehicle.

“This one has more intelligent software based on artificial intelligence,” Walter says. “It is very flexible for transporting materials around a warehouse or a plant because it has sensors and it learns the floorplan. And if you have multiple SDVs, they communicate with each other. If there is an obstacle, they re-route.”

Customized Solutions
Whether in need of a single machine or a complete process, Creative Automation can supply what’s needed. With a 50,000-square-foot manufacturing facility in Whitmore Lake, Mich., the company is both a distributor and integrator. “We have a full-service and spare parts operation and support,” Walter says.

Founded in 1994, Creative Automation was formed by Bernd Walter, Gerd Walter’s father, when he acquired the U.S.-based material handling division of SIG Automation.

With an initial focus on SIG’s gantries and pick and place designs, Creative Automation has since expanded its repertoire to include robots, vision systems, RFID and many other technologies.

From our early concentration on material handling with an emphasis on machine tool tending and cell-to-cell transfer, its operation has grown to incorporate conveyors, robots, palletizers, dispensing units, deburring systems and other equipment for industry.

“Traditionally, we have served the automotive sector, both OEMs and suppliers, but lately we have been branching out into truck component manufacturing,” Walter says. “Now we’re getting into the general industrial space and doing a lot with construction products like window frames and lights. It’s been an interesting journey.”

Some of its popular custom solutions include machine tending, such as dispensing and deburring. Creative Automation works with several partner companies to provide automated dispensing systems for a variety of applications and industries. They include robotic dispensing for air filter manufacturing, door gaskets, cavity waxing, gluing and sealing.

“Since we are an integrator, our solutions are very custom,” Walter says. “And robotics machine tending is big.”

After machining, many parts have burrs on them which can interfere with the fit and operation of the parts. Creative Automation offers a number of solutions for deburring parts. It can provide solutions that range from deburring multiple sides of a part in a single operation to debarring deep oil holes in crankshafts.

“We differentiate ourselves with good customer service and we specialize in certain niches, such as automotive space and the dispense is definitely a niche,” Walter says. “We’ve seen consistent growth for the past few years, but we are looking to grow with new technologies that will get us into new markets.”

The company’s customer base is primarily in North America. Creative Automation is ISO 9001:2015 certified.