Back to Profile Gallery > Custom Cable 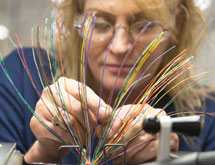 To offset the trend of off-shoring in cable assembly, Custom Cable works closely with its customers to offer them custom products with turnaround times that offshore companies cannot match. Following that philosophy, the company has established a custom business-to-business online portal called Buy.CustomCable.com at which its customers can design and order their own cable assemblies.

“It’s been a very static industry with very little innovation on the product, which has led to the commoditization,” Custom Cable President and owner Stewart Saad observes. “There is some erosion in the component margins for most large suppliers, and that’s why they’ve moved all their manufacturing offshore.”

But companies like Custom Cable innovate differently. “It’s not product innovation – it’s really channel innovation, which gets back to having the back-end, the logistics, the flexibility, capacity and capability to react and assemble and ship from a single company,” Saad says. “We are uniquely positioned in that we go direct to the end-user. There’s not a lot of companies that do what we do.”

Because the business is mostly just-in-time, Custom Cable stocks nearly $1.3 million worth of thousands of SKUs and different types of cables and connectors. Saad estimates there are approximately 650 cable assembly houses in the United States. “There’s been very little innovation in the equipment,” he says. “It’s a highly fragmented industry at the proprietor-level.

“There’s a huge gap in our industry between the haves and the have-nots, or the big companies and the little companies,” he continues. “The big challenge of the little guy is that big companies like to do business with big companies. So it’s hard to get market share from corporate procurement departments.”

Custom Cable sells copper, radio frequency, coaxial and fiber-optic cable assemblies along with wire harnesses to manufacturers, OEMs, systems integrators and directly to end-users. “We’re a single source for a variety of cable products, which helps us diversify our business as well as keeps us healthy,” Saad points out.

Custom Cable’s newest configurator is coming out soon. “We have just released the most robust configurator cable design tool in the industry,” Saad declares. “We’ve created all our own software.” The configurator also can be accessed from mobile devices so cables and assemblies can be designed onsite.

Custom Cable purchases raw fiber-optic cable from suppliers and polishes it to an industrial standard geometry so it will transmit light signals without interference. “We sell to four of the five-largest wire line operators in the United States,” Saad asserts. “We have gotten their business due to the fact that we meet their quality requirements and we’re very responsive with quick turnaround.”

Automating cable assembly is difficult because it is very meticulous hand work. “We have automated to drive our cost down,” Saad declares. “Our goal is to be a low-cost provider. We have machines that strip cable, and machines that cut or cleave the cable. Then we’ve written software that archives our test data, which used to be done manually. But we really haven’t reduced the number of people on the assembly line – we’ve increased throughput. You still need a person at each station. So you’re not really automating any of the process – you’re just accelerating the assembly process to a finished product.”

Test data is archived, serialized, tied back to the company’s TL9000 QMS reporting system and stored forever. “Our company has certifications for our plant, processes and people,” Saad maintains. “Lots of manufacturers for highly technical things are highly qualified and certified, but in the cable assembly business, most companies don’t have a lot of the quality programs in place other than the ISO certifications. Our company’s certifications speak to our commitment to quality. We have the same certifications as the large companies. ”

That level of sophistication has proven valuable because the company does not compete for large portions of the cable market that are assembled offshore in Mexico or China. “What’s been left for companies like ours is the high level of service and custom projects, which typically include lower quantities,” Saad says. “The faster cradle-to-grave engineer, procure, assemble and get-to-market – which is called the quick turn – is a large portion of the market we serve, as well.”

Besides meeting sizable inventory requirements, Custom Cable also competes via its logistics, which is handled by a robust enterprise resource planning system. “The logistics of what we do are very important,” Saad stresses. “Not only do we carry a lot of inventory, you have to have a supply chain to consistently deliver product to your customer. A lot of the smaller end-users you can pick and ship directly to their location. All the logistics to have the components and raw cable – coupled with the ability to package 150 to 200 items a day and ship them to the right spot – is as critical as the assembly process.”

Custom Cable’s total focus on the customer’s needs – such as the company’s self-designed software for its configurator –will be its differentiator for success. “To automate and eventually collaborate with your customer on providing the tools that help them run their business better, that’s relatively new to the manufacturing space, in my opinion,” Saad remarks. “It’s those types of uses of technology that will allow American manufacturers to regain parts of the market that have moved away. We are the ones that innovated the business to allow for wireless access to any interface, and our business has been the last one to adopt any substantial innovation in how the business is done today.”

The large cable assembly companies might not have the flexibility that a company such as Custom Cable does, Saad thinks. “I call them dinosaurs, but they own the market, they control the market, so they don’t have to innovate too much or change,” Saad concedes. “But we think that if you’re not innovating, you’re in big trouble. Things change quickly in industry today. If you’re not on the front edge utilizing technology, then you’re in a risky spot.”