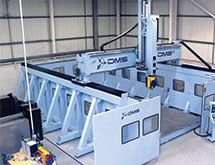 Diversified Machine Systems (DMS) makes machines. It makes the machines that make machines, and sometimes, those machines make other machines. It’s hardly a cold, impersonal environment, but rather, a hands-on, tightly knit community of people who love what they do.

It started as a family enterprise. Brothers Patrick Bollar, CEO, and Steve Bollar, vice president of mechanical engineering, still sit down together with the DMS in-house engineering team and with their customers’ engineers to determine their needs, and then the two of them sketch out – on paper – the initial design for every order they get.

They each have more than three decades of experience in machine tool design and CNC router applications. Patrick, who started working on his father’s milling machine when he was 10, launched DMS in 2003, and Steve has been working alongside him the whole time, engineering custom machines for unique applications for many industries and installation requirements. Many of the key people who have worked with them from the beginning are still with DMS now.

“Our passion has always been inventing new machines,” Patrick Bollar says. “We wouldn’t want to make the same thing every day.” And they certainly don’t. “Our machines make everything from skateboards to Disneyland façades to heat domes on Mars rovers,” he says. While they have a bank of about 100 different designs from which to reconfigure, the engineering team is often called upon to make entirely new prototypes.

Today, DMS is an international industry-leading designer and manufacturer of 3-axis and 5-axis CNC machining centers. It has a full standard product line and offers custom router and machining solutions. It supplies machines to a variety of manufacturing sectors including aerospace, automotive, marine, recreational vehicles, 3-D sculpture, concept models, pattern making, formed plastics and woodworking. Aerospace is the company’s largest market, accounting for about 60 percent of DMS’s business and includes many of the world’s top aerospace companies.

A production run ranges from one unit to 60. The size of the machines also varies considerably – from as small as one foot by one foot for office use to as large as 100 feet by 20 feet. The latter was for a machine that produced the moulds for the hull of custom yachts.

Bollar knows each of his 65 employees because he works alongside them daily. “People say you aren’t supposed to work with friends, that it’s not a good idea, but my best friends all work here,” he says. “I think my employees respect me more because they know that, at one point or another, I’ve done every job in this place.”

But Bollar acknowledges that he needs to relinquish some of that control for the company to get bigger. “I’ve been called a micromanager in the past, so I’m delegating more and more everyday,” he says. “And with each new manager I hire, the company grows, so it seems to be working.”

When DMS began, it was making two or three machines a year. This year, it expects to make about 150 between the DMS product line, the subsidiary brand Freedom Machine Tool and the much-anticipated Table Top Series. The company reports revenue growth of 30 percent year over year for the past four years. Last year, it consolidated three smaller facilities into one large headquarters, which the company is “close to outgrowing already,” Bollar says.

Bollar credits the company’s suppliers – including Fagor Automation, Bosch Rexroth and Northfolk Iron & Metal – with much of DMS’s success. “Our relationships with our suppliers – it’s everything,” he says. “I can’t stress enough that it’s a partnership.”

Part of this growth curve can be attributed to the company’s exponential growth internationally. “We’ve always done business abroad, but in 2010, we started really focusing on it,” Bollar says. DMS has sold in more than 13 countries, shipping to the U.K., Switzerland, France, Germany, Israel, India, China and Thailand, and has factory-authorized dealers supporting all those regions.

DMS also provides full technical product support and maintains a complete spare parts inventory — an offering that was introduced during the last recession. Experience in a similar business before DMS gave Bollar the insight to handle the downturn that hit the manufacturing industry especially hard.

When the recession hit in 2009, Bollar was ready to shift gears quickly. “No one was going to buy a new machine then, but everyone had to keep their current machines running,” he says. So DMS moved into retrofits and updates, loyally helping customers. It also started buying old machines and refurbishing them. “When the economy started recovering and all the refurbished machines were sold off, then customers were able to buy new machines again,” he says. “It played out exactly the way we thought it would.” Today, DMS provides machine support and service to 3,500 customers.

DMS was awarded the 2013 Regional Business Excellence in Manufacturing Award and recently named a 2014 Colorado Companies to Watch Finalist.