Back to Profile Gallery > Durbin PLC

With offices and warehousing in both the UK and the United States, Durbin PLC has flourished into one of the world’s premier pharmaceutical wholesalers by providing superior services to its customers

Saving lives by saving time. That is the motto and ethos that Durbin PLC (Durbin), one of the world’s leading specialist medical suppliers lives by. Established 55 years ago, in 1963, the company has developed into one of the premier distributors of pharmaceuticals, medical equipment and consumable suppliers to healthcare professionals, hospitals, physicians, NGOs and charities in more than 180 countries.

In the five-and-a-half decades since it was formed, Durbin has set up its operation to act as a one-stop-shop, able to respond to healthcare supply needs from local project level to national scale tenders, supplying over 20,000 branded/generic pharmaceuticals, and medical and consumable products. The company’s divisions encompass International Sales through Sales to NGOs and charities, Clinical Trials Supply, Managed Access Programs, Imported (Unlicensed Medicines), Sexual Health Supplies, and the storage and distribution of medical products and devices for third parties.

“It has been a busy time for all of our divisions over the last few years,” explains Leslie Morgan OBE DL, CEO of Durbin PLC and Representative Deputy Lieutenant for The London Borough 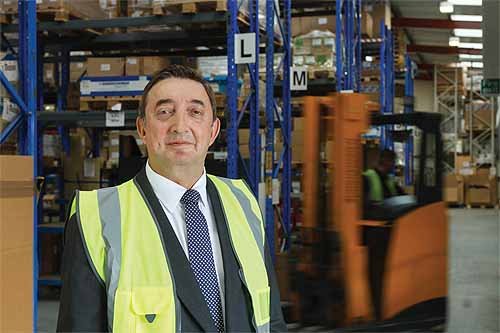 of Tower Hamlets. “We continue to work extremely closely with companies and partners to bring new innovative medicines to market quickly.”

By being able to supply UK, European and US products from source, from a single cold chain item to large scale humanitarian projects, Durbin has also shown numerous times that it is able to provide access to therapies that may not be easily accessible in particular regions, a fact that continues to prove critical when certain areas or communities are faced with medical challenges. “We are very proud, for example, that our Aid and Dev colleagues were able to assist in the supply the international effort against the spread of Ebola in West Africa,” Leslie adds.

In 2017, Durbin began the process of combining its UK warehouses and offices with a move into new, larger premises located close to Heathrow Airport. The new facility will see the company’s pallet capacity increase by three times its previous amount, and also boasts a secure loading area, fast-action loading bay doors and a brand new, state-of-the-art temperature control system. “To put it simply, we were outgrowing our existing warehouses, of which we had three in total at the time,” Leslie says. “We now have the office staff and the warehouse on the same site, and are already benefiting from our great new facilities. We have also invested strongly in the technology we are utilising within the warehouse, which will enable us to do more and do it quicker.”

Durbin’s efforts have seen it win many awards over the years, including the ‘Export Excellence in the Americas’ category at the UK Export Excellence Awards 2016, and ‘Exporter/International Business of the Year’ at the West London Business Awards 2017. The company was also identified within the London Stock Exchange Group’s ‘1000 Companies to Inspire Britain in 2017’ report. “I strongly believe that awards are a recognition of the efforts put in by all of our staff, and represent public acknowledgement of their collective skill, vision and sheer hard work,” Leslie proudly states. “There is also the added fact that they help to set a benchmark for us to achieve even more in future years.”

In April 2018, the company was also delighted to announce that it had been named as the recipient of one of The Queen’s Awards for Enterprise, in the field of International Trade, 2018. “We are extremely proud to have won this most prestigious award, which truly recognises the international nature of Durbin’s business in exporting to over 180 countries worldwide for many years, as well as our contribution to the UK economy,” Leslie proclaims. The British reputation for quality and efficiency is global, and an award from The Queen just confirms our dedication to the standards that she herself embodies.”

Success in winning awards has also followed the company overseas, where its US business, Durbin USA (formally PTSI), has previously been presented with the ‘President’s E Star Award for Export’ in recognition of its efforts over the last few years. “In addition to winning the President’s Award, we have made fantastic strides with our US activities, having tripled our staff here in the last four years and, just recently, we have opened a new warehouse,” Leslie adds. “We are investing in new equipment and systems here as we believe it is a great time to take advantage of the opportunities the US market has to offer. Furthermore, our US colleagues have shown to bring a huge amount of enthusiasm to the job and are a real pleasure to work with.”

With its first office in Singapore having also just recently opened its doors, boosting Durbin’s capabilities within the region, it is clear that 2018 will go down as a year that the company continued to push forward its growth strategy. “We have a number of new programmes and projects that we are working on that will really grow our business, but innovation and improvement never stops here at Durbin, and never should!” Leslie declares. “Durbin is going to continue to expand. We have a robust set of plans that will take us to the next level as we open even more offices and companies around the world.”