Back to Profile Gallery > EAO Corp. 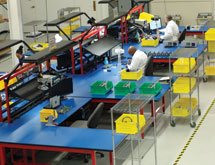 As an industry leader for nearly 70 years in building human machine interface (HMI) components, EAO Corp. has brought its innovation to the next level by creating customized HMI Systems, a new division of the company.

HMI components include products such as push buttons, switches, keypads and keyboards that provide a link between a user and a machine. HMI Systems provide the controls for users to operate a machine, system or instrument. Systems can range from a simple panel with a set of electromechanical controls – such as push buttons – to a multi-layered graphical touchscreen combined with electromechanical controls. “We spent many years offering components only and we have evolved into a mixed technology provider,” President Lance A. Scott says.

EAO began in 1947 by developing and marketing switchgears, high-voltage rectifiers, static converters, transformers and customer-specific control apparatuses. In 1958, the company created the first illuminated push button – the Series 02 – setting a new standard in the industry. EAO continues to produce HMI components and systems for many industries, which include public transportation, medical, automotive, machinery, and heavy-duty and special vehicles.

“The process of developing an HMI System begins when a customer shares a preliminary idea for a new system with EAO. The company begins a detailed consultative approach to define the ergonomic, human factor, safety, environmental and operational requirements of the specific application,” Scott explains. “Early concepts are presented as sketches, 3-D CAD models, or physical mock-ups in an iterative process that leads to the ultimate HMI solution.” EAO guides the customer through considerations such as, “Is the application best suited for discrete push buttons, switches, touchscreens, or a mixed technology HMI approach?”

HMI system creation is more of a consultative approach than its component counterpart. Alterations and tweaks are presented to the customer over a period of time using 3-D print prototyping. This prototyping provides the quickest way to get the system on the market. Depending on the market for the system – whether it is a fairly simple control panel for machinery or a highly complex and regulated interface for the medical industry – the process can take two to three months or last two to three years.

A challenge in the HMI Systems department is the consumer preference for using a touchscreen for everything – or as some say, “iPhoneization.” “When the iPhone came out it very quickly changed expectations at every level throughout the HMI world,” Scott says. “It presents challenges and opportunities for the company.”

But using a touchscreen alone is not always the best option, he adds. For example, EAO creates a red emergency stop switch with a yellow background – would a “touch here” button on a screen ever replace the physical switch? Another example is using a keypad on a touchscreen – would a physical keypad be easier to use? Scott believes there is a clear, ongoing need for actual push buttons, switches, keypads and other interactive HMI devices at least in these situations. Touchscreens aren’t always the best option. “A well-designed Graphical User Interface on a touchscreen can be a powerful tool, but there are limits to what it can do,” he adds. “Look at the iPhone, it still has multiple push buttons and switches on it. It has human machine interface devices other than the touchscreen.”

EAO designs clients’ systems from concept through production, which allows it to be competitive with other system designers. Competitors of EAO will create a system for a customer but only use one technology or standard product. EAO is unique in that it will use a touchscreen from one company and add its own HMI components, if that’s the right solution. “We offer total solutions whether or not we have every component that would go into that solution,” Scott says. “That differentiates us from large or small competitors out there.”

The HMI Systems business has grown at more than a 100 percent cumulative annual growth rate since 2009, and has its highest order backlog in its history. “The goal is to establish a sustainable growth path for the future of the EAO business by establishing a high-growth, autonomous [HMI] program within EAO,” Scott adds.

“We definitely feel that we are true experts in components, but the addition of complete HMI Systems to our portfolio presented some new manufacturing challenges,” Scott says, which is why the company recently changed the entire layout of its Connecticut plant. The HMI Systems factory is now grouped into cells as opposed to an assembly line to manufacture components. Scott says there are few new manufacturing techniques involved; rather, smart, organized groupings to allow for maximum efficiency and flexibility.

The plant was designed using group technology, which required manufacturing and assembly processes to be grouped by similar function, Scott explains. “We went into it with eyes wide open and set up – from scratch – a manufacturing operation that would run on the lean manufacturing philosophy,” Scott says.

Because of its ingenuity in the layout of its manufacturing plant, EAO received the “Innovative Enterprise” ML100 award in May during the 2013 Frost & Sullivan Manufacturing Leadership Summit. Scott received a 2013 “Manufacturing Entrepreneur” ML100 Award for his individual leadership. “The EAO North America operations team did a great job to make this happen and in a quick timeline,” Scott says. “We were able to do this due to our deep knowledge of the HMI components. It’s really proven to be a great success.”