The history of the Ebac Group Ltd. began in 1972 when the company was founded by its current chairman, John Elliott as a one-man business that has since grown into a flourishing international business through the development of truly innovative products in the dehumidifier and water cooler markets. Ebac is still based in the town of Newton Aycliffe within County 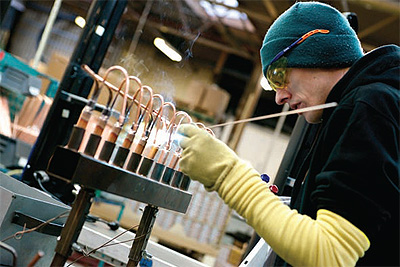 Durham and is today Europe’s market leader for water coolers and Britain’s leading manufacturer of dehumidifiers. “Ebac is a British manufacturing company, which operates as a foundation and is owned by a Trust – there are no shareholders. All of our profits are returned to the company to promote growth, provide jos and support local communities, including sports sponsorship and apprentices,” reveals Sales and Marketing Director, Tony Hird. “We produce most of our products within Ebac through injection molding, sheet metal fabrication, printed circuit board (PCB) manufacture and design.”

During its history Ebac has established a leading reputation as a trusted manufacturer of not only water coolers, dehumidifiers, but also chest freezers and washing machines. Indeed innovation and quality remain at the heart of the company’s operating philosophy and its dehumidifiers have led the market for over 25 years, while its water coolers continue to re-define the popular perception of these products both at home and in the office. Ebac is also well renowned for its expertise in bespoke air-conditioning and refrigeration solutions for industry and the company was also the first to manufacture and retail Brita Filtered Water coolers ideal for the domestic market. Furthermore, Ebac is additionally able to offer management services and financing solutions for businesses and start-ups in the bottled water industry. Today, Ebac Group is made up of Ebac Foundation, Ebac Ltd, Ebac Industrial Products and 50 per cent of XEL Design.

Ebac maintains the highest levels of quality in accordance to several respected industry standards including British Standards Institution – ISO 9000; British Electromechanical Approvals Board (BEAB); CE – product safety certification; UL and Energy Star approval; and CENELEC – Pan-European equivalent to BEAB. The company employs from all sections of the community, actively promotes equal opportunities and also enjoys strong relationships with its suppliers that have each been fully vendor rated to further ensure consistent levels of quality. “Our employees and our suppliers are very important to our success,” Tony explains. “We work with our suppliers to improve our quality and our cost base, which in turn benefits everyone.”

During October 2016 Ebac officially launched its new range of washing machines, making it the first company to manufacture and sell washing machines within the UK since 2009. “We believe that Britain should manufacture more everyday products. Doing this will reduce our trade deficit, create more jobs, increase tax payments and overall significantly improve the British economy. Every year over four million washing machines are purchased in the UK and every one of them is imported,” Tony says. “Ebac are very good at making products which are robust, reliable and cost effective. This has been demonstrated by our long-term success in our other markets. We wanted to get into a bigger market, even though initially our volumes would be niche. We secured a £1 million government grant, which contributed to a £7 million investment into design, plant and machinery to enable us to make washing machines and our longer-term aim is to launch additional appliances.”

Ebac is proud to represent British design and manufacturing, with over four decades of industry experience. The company has developed a line of high quality and realistically priced washing machines, with some including a ten-year warranty. The range includes the ECare + 8kg, 1600 spin Dual Fill machine, which is currently its best-selling machine. The washing machines include technology such as the dual fill system, which uses hot water from the customer’s boiler, making the unit up to three times cheaper to heat when compared to using electricity. This system also saves up to 40 minutes and uses 29 per cent less energy per wash. As a result of a dedicated and comprehensive period of design the company’s washing 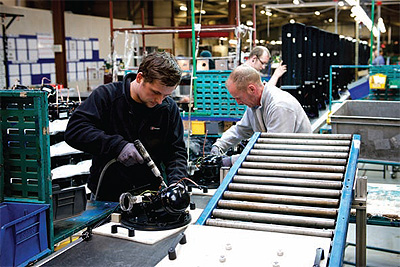 machines have been positively received on the market, with strong sales and high levels of demand. “We took our time to get the product right, which we were able do because we are a foundation. We also researched the market and gained an understanding of what customers value in a washing machine and chose to work with the independent retailers community, initially only in the North East of England,” Tony observes. “The response we got from the retailers was amazing. They have all supported us and the product range, which makes a huge difference to the success of the product.”

While the company has enjoyed great success throughout 2016, the Ebac Group is keen to build on this momentum in terms of its washing machines sales and across the business. “We launched washing machines on the 1st October, 2016. So far sales have been higher than expected with some retailers having to sell their display stock just to meet demand,” Tony concludes. “We have a forward strategy of controlled growth. We are planning to double our turnover in the next five years. We have just won a new contract to design, manufacture and supply a new water cooler to the largest distributor on the USA, we are launching dehumidifiers into Europe and we will continue to grow our washing machine sales in the UK.”