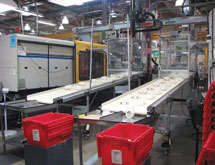 Having pretty much invented the water softening business in 1925 with a fellow named Emmett Culligan, Lynn Lindsay’s Lindsay Co. over the years has been transformed into EcoWater Systems LLC. That long history and innovation in research and development is keeping EcoWater Systems LLC on the cutting edge of commercial and residential water softening.

The advantages of water softening are multiple. For commercial customers such as restaurants, motels, hotels, hospitals, schools and some prisons, water softening will provide softer towels, cleaner glassware and better-tasting water, coffee and beverages. Soft water saves on cleaning, energy, plumbing repairs and general maintenance. It also extends the life of linens, fixtures and appliances, EcoWater Systems says, along with savings on chemicals, detergents, coffee and other beverages made from concentrate.

Serving residential and commercial customers, EcoWater Systems LLC supplies a line of water conditioners, refiners and filters. At the Woodbury, Minn., headquarters near St. Paul, the company concentrates on ion exchange water softening systems. These are designed to remove the calcium and magnesium that make water hard.

“Those are very common minerals in the earth,” EcoWater Systems Professional Products President Chris Wilker explains. “As water comes down through the sky and hits the earth, it’s really pure. As it percolates down through the ground on the way to an underwater aquifer, it dissolves whatever it comes in contact with. The city puts a well or the individual homeowner pokes a well in the ground, goes down 180 feet and gets good clean water. As they pump it up, it contains hardness measured in grains per gallon.”

A piece of calcium – blackboard chalk – the size of an aspirin tablet dissolved in one gallon of pure water would test at five grains per gallon of hardness. That hardness level and above is the point at which equipment is installed to soften a residential home’s or a commercial establishment’s water, Wilker says.

Salty Pellets
In the United States, the Midwest, Texas and the Southwest have some of the hardest water in North America, Wilker asserts. Water in west Texas can have 100 grains of hardness, the equivalent of 20 of those aspirin tablets of chalk dissolved in one gallon of pure water.

Cation exchange resin – plastic beads about the size of a pencil tip made of polystyrene that are cross-linked with divinylbenzene – have a chemical charge on them and sodium attached to them. As the hard water flows through them, the calcium in the hard water is exchanged for the sodium on the beads, and the water is softened.

“They do a really good job of that, but the beads have a finite life,” Wilker notes. “So a certain amount of ion-exchange resin has a certain capacity. Once all the sodium has been exchanged and all the calcium is on the beads, in order to clean that calcium off the beads, the system has to regenerate the beads with salt brine, which is concentrated salt.” That salt is added to the softener system by the operator or homeowner.

The brine then is flushed into the sewers. This process happens automatically for homeowners once or twice weekly on average, depending on their water usage and hardness. Commercial customers such as hotels or hospitals may require more frequent regenerations.

Water Regulations
All that salty brine going into the sewers has resulted in increased legislation. “As the drought continues in southern Texas, Arizona and southern California, those states are really faced with significant water quality issues,” Wilker points out. “They have to reuse water, and it gets more and more expensive for them as the water quality becomes degraded.”

California passed a law allowing water districts in the state to pass legislation to ban the sale of ion exchange softeners for residential homes. To prevent such laws, the water softener industry has improved the efficiency of its products markedly.

Additionally, the amount of water used in each regeneration has decreased from 80 gallons to 20 to 25 gallons in the more sophisticated, engineered systems.

Manufacturing Muscle
Only a handful of other companies are major integrated manufacturers of ion exchange water softening systems, Wilker asserts, but many small companies assemble them from components they buy. “They buy a mineral tank, a brine tank, some resin, a valve and riser pipe, and screw it all together,” Wilker maintains. “We call those assemblers. There are many, many of those.”

EcoWater Systems LLC is in the forefront of research and development on improving the efficiency of ion exchange water softening systems and in representing the industry before legislative bodies. “Innovation is how we grow,” Wilker emphasizes. EcoWater Systems products are sold in North America, China and throughout Europe by home centers, plumbing wholesalers and mainly by branded rather than independent dealers, who frequently buy their products from assemblers. Wilker stresses that hard water is a global issue.

The company’s 200,000-square-foot plant in Woodbury, Minn., is where most of the EcoWater Systems Professional Products water softener systems are engineered, designed and manufactured. The pressure tank that is called a mineral tank where the ion exchange takes place is manufactured using a combination of blow molding and filament winding. “Our brine tank is blow molded and then structurally enhanced to meet demanding pressure requirements by winding the tanks with engineered materials,” Wilker explains. “None of the softening systems’ tanks are made of metal.”

Sizing Systems Up
The size of a commercial or residential ion exchange water softening system that is required is based on the total gallons of water used daily and the flow rate. “One of the criteria for commercial applications is when you size a softener, you have to be aware of what the flow rate vs. pressure drop is,” Wilker explains. “If it’s configured incorrectly, you’ll have large pressure drops so they won’t get the flow rate they need to flush the toilets. For a hotel, we’ll size the system based on a specific percentage of occupancy at peak flow, meaning when everybody is using the bathroom and taking a shower in the morning. We size based on a peak flow rate, along with the hardness capacity requirements.”

Dealer training and headquarters expertise are employed in system design. “We have a team of experts here that provide commercial service quotations over the phone and through the Internet to make sure we are providing our customers with the right size of product for the applications we have,” Wilker points out. “We also train our dealers and put simple, effective training tools on the web.”

Nowadays, consumers can educate themselves on the web, but not always successfully, Wilker thinks. “I would argue – and some would take an opposite position – that today with the Internet, consumers have never been more confused about their water and the available water treatment options,” he asserts. “The Internet is a wonderful tool for misinformation or partial information. You can Google ‘soften,’ Google ‘water purification,’ and if you spend an hour doing that, you come away so confused because of the claims and misinformation on the Internet, you won’t know who or what to believe.”

He praises the Water Quality Associations’ certification program. “As long as those dealers are continuing their education, they’re in the best position to truly educate customers about what is the best water treatment technology for their specific water quality,” Wilker continues. “The Internet has been a boon. Consumers are so confused, they believe crazy things about the water because they read it on the Internet.”