Back to Profile Gallery > Elekta

Elekta is an innovation leader in pioneering radiation therapy solutions, with image-guided radiotherapy at the forefront of what it does

Elekta was founded in 1972 by Laurent Leksell and his father, Lars Leksell, a Swedish physician and Professor of Neurosurgery at the Karolinska Institute in Stockholm, Sweden. He was a pioneer in modern neurosurgery techniques and renowned as the inventor of radiosurgery and developer of the advanced radiosurgical platform, Leksell Gamma Knife®. This non-invasive method for treating brain disorders works by applying a single dose of high radiation to a small and critically located antra-cranial area through the skull. It is the preferred radiosurgical 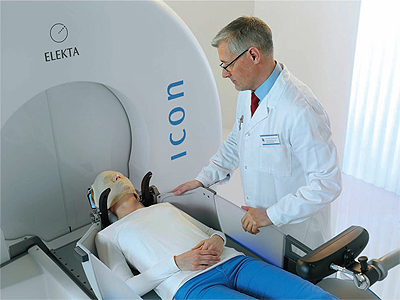 method for its precision, efficiency and exceptional therapeutic response. Today, Gamma Knife surgery is performed in hundreds of leading hospitals and clinics around the world, to around 70,000 patients. No other non-invasive procedure in this field has greater clinical recognition. “Our history is what drives us forward. We have dedicated ourselves to pioneering advancements for cancer care,” said Global Vice President of Supply Chain and Manufacturing at Elekta, Steve Wort.

“There have been many developments over the years since our beginnings. We are the leading innovator of equipment and software used to improve, prolong and save the lives of people with cancer and brain disorders. Elekta solutions are used in more than 6000 hospitals worldwide and we employ around 3600 people around the world,” explains Steve.

Indeed, over the last four decades Elekta has grown and acquired Philips Radiation Therapy Division, which became Elekta Ltd in 1997. Additional key acquisitions include Neuromag in 2003, IMPAC Medical Systems Medical Intelligence in 2005, Beijing Medical Equipment Institute (BMEI) in 2006, 3D Line Medical Systems in 2007, CMS in 2008, Resonant Medical in 2010, Nucletron in 2011, Radon in 2012, and a number of key distributors, in line with market developments and its own strategic vision to gain a strong international presence in cancer care.

Further innovative developments have taken place over the years advancing the company to the very forefront of radiation therapy. Elekta was the first to integrate CBCT and introduce imageguided radiotherapy in 2003, developed the first Monte Carlo based treatment planning system in 2008, the first to introduce an analytics platform to mine MOSAIQ® data in 2014 and it developed the first on-line adaptive radiosurgery system, Leksell Gamma Knife® Icon™ in 2015. In addition to these significant advancements, Elekta has been working on a new and revolutionary machine for the oncology department.

The next generation of radiation therapy: MR-linac*
An exciting breakthrough in the treatment of cancer is a new product called the MR-linac that has taken ten years to develop. “This is next-generation innovation for the treatment of cancer patients using radiotherapy. Development started in 2007 and it’s the first high-field MRlinear accelerator of its kind,” said Steve. MR-linac integrates an ultramodern radiotherapy system and a high-field MRI scanner with advanced software that allows a physician to capture diagnostic quality images of tumours and surrounding tissue during treatment. The MR-linac is expected to improve tumour tissue targeting while reducing exposure of normal tissue and critical anatomical structures to the radiation. It will allow physicians to precisely locate a tumour and visually track it. This allows physicians to rapidly respond and offer personalised care.

Elekta, its technology partner Philips, and the MR-linac consortium members are working to make the MR-linac a reality. MR-linac has the potential to fundamentally transform radiotherapy by enabling radiation oncologists to see the treatment target in real time, and to rapidly adapt the plan in response to diagnostic quality MR images. The technology fully 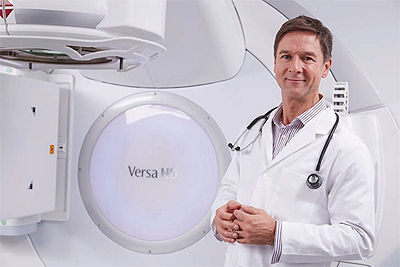 It is hoped that the precision of the treatment will reduce patient concerns around after care. “Radiation plays a central role in approximately 50 per cent of patients who are ultimately cured of cancer, but still causes anxiety in patients who fear negative post-treatment side effects,” said Professor Kevin Harrington, Joint Head of the Division of Radiotherapy and Imaging at The Institute of Cancer Research, London and The Royal Marsden. “MR-linac has the potential to radically improve the precision of radiation delivery, through crystal clear imaging. We expect MR-linac to increase physician confidence in treating the intended target, while also putting patients at ease.”

Currently the MR-linac is being tested in seven hospitals in the US and in Europe, including two sites in the UK. Consortium members are currently engaged in various stages of evaluation and are collaborating to establish new protocols for clinical research and develop methods for data collection and analysis. The system is undergoing thorough tests and various objects have been selected for shape and weight.

Elekta is not only an innovation company, but it also values manufacturing excellence. The manufacturing side of the business happens within Europe, Asia and the US. The primary manufacturing site for the company’s linear accelerator in the UK is located in Crawley, West Sussex. The company makes a significant contribution to the regional economy with around 200 manufacturing jobs in the UK supply chain. “Over the past years, we have had significant job growth at the Crawley facility, and we also work to develop young talent by hiring apprentices, many of whom are now in technical roles within the company,” concludes Steve.

*Elekta’s MR-linac is a work in progress and has not yet been released or received regulatory approval for clinical use.