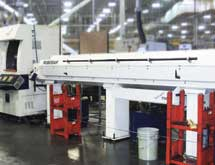 So whatever can be done to reduce the number of deliveries is helpful. Delivering gass­es under pressure in thermos-like tanks that keep the gasses 200 to 400 below zero degrees Fahrenheit can provide far more volume than warm­er, low-pressure storage.

“They cool the gasses down to reduce the volume, so they can put more in a container, and when they become vapor again, they expand,” explains Brian Davidson, senior vice president of sales and marketing for Engineered Controls International. Most of the company’s products are sold under the RegO Products brand name, which is well-known in the industries they serve.

Cryogenic gases are ones that are kept cool in transport. Instead of green or orange metal cylinders, they are stored in shiny metal tanks about four times larger than the green or orange ones. Because the gas is kept cool and compressed, an insulated, self-cooled cryogenic tank can hold nearly 100 times more gas than a conventional one. In the case of liquid natural gas, it is compressed nearly 600 times.

Although a cryogenic tank costs more than a conventional one, the savings in delivery costs will pay back the increased cost. Engineered Controls Inter­national manufactures valves and products for commercial cryogenic tanks under its RegO Products brand, along with many other devices.

The company’s products are used to transport and distribute gasses to commercial, industrial and healthcare facilities. It does not manufacture its products for consumer use, such as on home barbecues. “We used to make the valve for barbecues, but we stopped doing that years ago,” Davidson says. “Propane barbecues used to be sold through propane gas dealers. We prefer to stay with products where somebody who has been properly trained is using it.”

About the closest the company’s products come to consumers is on the large propane storage tanks in some backyards.

Gasses are used throughout industry. The types of gasses for which Engineered Controls manufactures products include carbon dioxide to carbonate drinks at fast-food outlets and restaurants, nitrogen to freeze off blemishes at dermatologists’ offices and liquid natural gas to power utility and public transportation fleets. A variety of gases are used for welding in factories and at construction sites.

Many Engineered Controls products are used for transport and storage of propane, anhydrous ammonia and oxygen. “For propane, we have the world’s largest and most complete product lines,” Davidson maintains. “For cryogenics, we’re probably one of the top companies that offers a complete line, and we’re continuing to expand that.”

Many of the gasses can be used with the same types of equipment, although sometimes changes must be made in certain components, such as rubber parts, that may be affected by the chemicals in the gasses. Many of Engineered Controls’ customers are global companies with their own engineering staffs.

“They’re experts at that stuff, so they pretty much are very well aware of what products fit in what applications,” David­son points out. “We don’t have to tell them too much about how our product fits into what they do with it. We manufacture components they select to use in their overall installation.”

Most of Engineered Controls’ products are metal. “The metal parts – the zinc, the brass, the steel – we primarily buy rod stock or forgings or castings,” Davidson says. “Brass is our biggest commodity. Zinc is the second, and steel is after that.” It also manufactures products from ductile iron and bronze.

Engineered Controls International buys from its more than 100 suppliers many specialized components, such as rubber gaskets, gauges and springs. “Nearly every product we make has a spring in it and rubber or seating components, o-rings, gaskets, caps,” Davidson asserts. “If it’s something we have to cut out, we buy the rubber ourselves. The main parts of our products are the bodies and the stems. We machine almost all the metal components, and we do all that machining ourselves here in the U.S. in North Carolina.”

The company’s main machining plant is in Whitsett, N.C., near Greens­boro, N.C. Machining also is done at the company’s plant in Burlington, N.C. “In Elon, N.C., we do assembly,” Davidson explains. “We also do mach­ining near Hickory, N.C., in Conover, where we make our propane regulators.” Each plant averages 100,000 square feet in size.

Engineered Controls International manufactures to ISO 9001 quality standards. “Quality is most important,” Davidson stresses. “You’re dealing with compressed gases under pressure. There’s a big difference if one of our valves leaked versus your water faucet leaking in your kitchen. A lot of the gases we deal with are flammable, so quality is the most important thing. For example, we primarily use one vendor for all our springs, just because we can trust in the product we get.”

Most of Engineered Controls’ suppliers are based in the United States. “Our company originally started in 1908,” Davidson notes. “We pretty much pioneered a lot of the designs many years ago. We were the first ever to develop these things. We have a lot of knowledge in what tends to work and what may be a potential issue. Price isn’t everything.”

The company’s products are manufactured only for the specific use for which they are designed. “We’re not taking, for example, a natural gas product and trying to make it work in propane,” Davidson says. “We’re designing it strictly for this application. Everything we do is geared toward the markets we sell to. We’re not adapting other products to make them work in the type of markets we serve, which is different than a lot of companies do, especially in niche businesses.”

Since moving to North Carolina from Chicago in stages during the 1980s, Engineered Controls International has highly automated its operations to reduce the formerly long and labor-intensive setup times. Now robotics and computer numerical control have reduced labor needs to the point that one person can operate three machines instead of only one.

“We’ve gotten it to the point where we virtually have no setup time on our equipment,” Davidson says. “Most of the parts are machined complete, where they used to have to go across multiple machines. If it went through three operations, you had three chances of having something go wrong.

“Additionally, we’re basically self-sufficient. We have our own tool equipment department. We can make, repair or fix any machine tools very quickly on site to keep the machines running.”

Automation and technology have reduced rejects and scrap. “We do not have the down time,” he adds. “We’ve done a lot with robotics, and that’s why we’re able to manufacture in the United States. Our labor content is almost as low as we can go, and it’s just because we continued over the years to reinvest in equipment.

“We have used automation where it makes sense,” he reports. “We use robotics where we can. Most of them are feeding machines or test equipment. The robotics has been huge, just because the cost has come down so much. They have eyes on them, and they can do a lot more than they could even three years ago. The payback is very fast on doing things like that. If you keep up with that, you can still remain competitive. On the other side of it, we have a lot more engineers who are doing the programming of the machine tools.”

The amount of automation in assembly varies according to the product and the length of the product run, which can vary from 100 annually on some products to 100,000. “There’s still some hand work, more on the assembly side,” Davidson concedes. “Because of our volumes, the best place you can automate assembly is really the sub-assemblies that go across a variety of parts. So pretty much for the rest of it, you still have manual labor doing something. We’ve really reduced the amount of distance a part travels during manufacture with lean manufacturing.”

Products are not just sampled to test for quality. “Every product we build is 100 percent tested before it ever leaves here,” Davidson insists. The company’s automated quality control department does much of that testing by computer for qualities like pressure. That department also tracks production through real-time updates from the operators through their computers on the production floor. The manufacturing cells and robots are designed by the company’s own engineers.

Engineered Controls’ actual average production time for a new product is three months, but it is four weeks for a standard product. “We’re pretty much using the 80-20 rule: we forecast 80 percent of our sales dollar-wise,” Davidson says. “We have a lot of sophisticated forecasting programs. It depends on the volumes and history of sales. If it’s something we sell sporadically, we’re not going to inventory it. If we have the components available, we can pretty much assemble it within a day or two and get it out the door.” Distributors carry an inventory of the company’s products, which gives the company leeway on lead times, as most parts are readily available to the end-user.

Engineered Controls ships its products worldwide. It has one warehouse each in Germany, China and Mexico to which it ships its products. Sometimes they are repackaged or modified for local markets. “It’s all made here and shipped to them over there, but that’s been where most of our growth has been – in international markets,” Davidson says. “Europe had tremendous growth in the last few years. Our business in Asia has just skyrocketed. South America and Mexico have been very strong.”