Back to Profile Gallery > Essel Propack 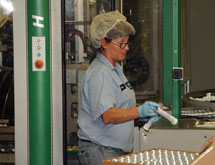 It’s an oft-repeated business adage: do one thing and do it well. For specialty packaging maker Essel Propack, that one thing is tubes.

Granted, the company makes two types of tubes — extruded plastic and laminate (aluminum barrier and plastic barrier) — and for an array of consumer products — from personal care to pharmaceutical to food. But when it comes to tubes, the Virginia-based company, which is the largest of its kind in the world and claims a one-third share of the global market, aims to also be the best when it comes to creativity and speed to market.

Many of its industry peers – mostly smaller, regional players scattered all over the world – compete on price. But according to Regional Vice President Ted Sojourner, Essel Propack is the go-to tube maker for packaging development. “Generally, manufacturers don’t look to packaging suppliers for innovation, but we’re working to change that,” he says.

Multinational consumer goods company Unilever is an important customer of Essel Propack for hair care and skin care packaging. When Unilever was looking for packaging with strong visibility for its premium hair care brand TRESemmé, it chose a new proprietary and patented laminate tube created by Essel. Trademarked as Egnite, it is a plastic barrier laminate with a metallicized polyethylene laminate layer. “There is no metal in it, but it has a highly reflectible metallic look and can be made in any color,” Sojourner describes. “It really pops on the shelf.” Essel developed it primarily for high-end cosmetic products.

The packaging maker’s parent company, Essel Group, is a conglomerate based in Mumbai, India, with operations in 12 countries, a worldwide workforce of 8,000 and global annual revenue of $6.5 billion. In addition to packaging, Essel Group has divisions in media, entertainment, infrastructure, education, precious metals and technology.

In 2002, Essel Propack launched operations in the United States with a greenfield startup plant in Danville, Va. The plant has expanded six times since then – most recently in 2011, which doubled the size of the facility to 200,000 square feet, and currently produces 750 million tubes per year. Essel Propack also makes most of its own caps and closures, and does all of its design and printing in-house.

Essel’s trademarked high-definition print technology is called Elite Printing. “The color and clarity is akin to high-definition TV,” he says. The printing operation also is capable of using scented inks, mostly for skin care products. “Customers can tell what the product inside smells like without opening the packaging,” he says.

Essel is currently developing special ink for 360-degree printing on tubes. “Standard inks can damage side seams and cause them to open,” Sojourner says. “Ours won’t interfere with seam strength.” He anticipates the company will be marketing this option to customers by mid-2014.

The design team has developed other aesthetically pleasing technologies, such as the trademarked process, Inviseam (named from merging the words “invisible seam”). “A side seam on tubing is not desirable. We’ve been able to shorten the standard overlap so that it’s barely noticeable,” he says.

In-house decoration contributes to short lead times, according to Sojourner. “Our vertical integration, along with strong control over supply chain, is a big part of our value proposition,” he says.

Depending on the size of a client’s business, Essel may assign its own internal project managers to certain large accounts to provide support, information and resources, and to ensure deadlines are met.

Essel works with regional suppliers but is able to secure the kind of optimal arrangements that a large global player can. “Because of our size, we’re able to advantageously negotiate with suppliers,” Sojourner says.

It helps that Essel Propack is U.S.-based. “A lot of U.S. consumer products companies want U.S. suppliers,” he says.

And those same companies want to see a commitment to sustainability, given how much consumable packaging their products require. “We’re proud that we don’t put anything into a landfill,” Sojourner says. “We regrind and use again, or if we can’t regrind it, we sell it to scrap companies that can use it in other ways.”

Sojourner sees growth in food categories, which currently represent only a small slice of Essel’s business. “Right now, tubes are more commonly used for food packaging in Europe and Asia than in the U.S.,” he says. “Some categories are ripe for application and expansion – jams and jellies, condiments and sauces are perfect for tubes.”

The ability to make larger tubes – which Essel is spearheading – will also spur increased use of tube packaging. “We’ve been able to increase the diameter of the shoulder to create tubes that hold up to 14 ounces,” he explains. “That opens up a much wider spectrum of products.”