Back to Profile Gallery > Euro-Rite Cabinets 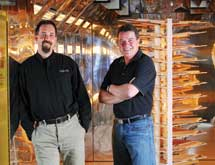 When companies are asked about their expertise, they usually talk about their products. For Euro-Rite Cabinets, however, its forte is all about custo­mer satisfaction. “We are very driven to satisfy our customers, make them successful and we become successful,” President and owner Bill Long­man says, noting that the company serves cabinet dealers primarily in western Canada, but have dealers in eastern Canada, the United States, Mexico, Japan and China. “Our major competitors are huge companies, and us being smaller makes us focus on quality control.”

In its nearly 30 years in the industry, the ready-to-assemble (RTA) cabinet manufacturer has mastered the art of customer service. Euro-Rite says it is able to react quickly to its customers’ needs. “Things don’t al­ways go perfect, and if complaints come in, we focus on satisfying our clients by fixing the problems first and dealing with how it happened later,” Longman explains.

Reacting quickly also is something that Euro-Rite applies to today’s market. As some of its competition closes their doors, the company is taking advantage of the opportunity. “With so many cabinet companies going broke right now, we have been buying a lot of their equipment,” Longman states, noting that the company recently purchased a $1.5 million fully automated finishing spray line.

As the recession continues, Euro-Rite has shifted its focus to productivity. “That is why we’ve taken our manual spray line and made it automated,” Longman notes. “We also purchased some used material handling equipment to help process our cutting, drilling and edge branding.”

Additionally, the company has re­cently introduced scanners through­out its production and distribution centers. “That would lead to more accurate shipping, it will help us with back orders and production and order tracking, as well as efficiencies in accounting,” Longman explains.

Euro-Rite also is performing a six-month study and considering putting a narrow aisle pallet tracking in its distribution center. “It will have narrow aisle forklifts, so instead of having a 16-foot-wide aisle, they will be nine or 10 feet wide. We’ll have an extra 35 to 40 percent more space.”

There is no time to sit still even if the market is slow, Longman notes. “We have been spending quite a bit of money on productivity,” he states. “We are preparing ourselves for when the boom time comes.”

Euro-Rite manufactures about 1,200 cabinets and components a day in its 86,000-square-foot facility in Port Coquitlam, British Columbia. Near its headquarters is the company’s 42,500-square-foot warehouse where it stores its completed products until the time of shipment.

In 2009, the company introduced a 3 Box RTA system, designed to offer flexible solutions for retailers, thanks to its easy assembly. “With our competition, [custo­mers] have to discard the exposed gables it came with, so they’d have to buy a replacement gable to complete the cabinets,” Longman explains. “With us, the gable colors are matched already. It is more cost-effective and better looking that way.”

Although the industry is experiencing a slowdown, Euro-Rite still manages to make a good profit. In fact, its 2009 revenues were up from its 2008 sales. “We had a plunge, and now we are growing again,” Longman says. “[It’s because] we are cost-effective and com­petitive, so clients are taking a look at our products.”

However, some of Euro-Rite’s com­petitors that are still in business are cutting their prices to compete. “We are financially sound,” Longman says. “We can cut our prices and still re­main profitable. But we don’t want to do that just to compete. We won’t drop the prices of our quality products to match a lower-quality product, but if it is something of the same quality, we will match our competitors’ product price. But even when we do that, we’re still making money. When smaller companies do that, they can usually barely make it. That’s not the case with us at all.”