Back to Profile Gallery > Extron Inc. 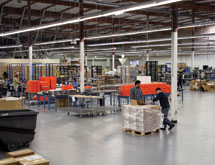 Manufacturers know that any system has to go through a few trial runs to ensure effectiveness. They also know that to maintain a certain level of operational effectiveness, systems have to be redefined when new factors come into play. It’s a concept that applies not only to the process of manufacturing but to the business of it, as well – the way companies are managed, the partnerships they maintain – and each aspect of the corporate structure has to be tested and modified to ensure a well-run company.

Sandeep Duggal and Doug Nesbit, both of Extron Inc., say that in the past few years they have seen a shift in manufacturing thinking here in the United States. Duggal, CEO, and Nesbit, vice president of marketing, agree that the trend toward bringing manufacturing back to the United States is very real and here to stay. As a contract manufacturer offering services in what the company calls “last-mile manufacturing” – including integration and configuration, fulfillment solutions, logistics and distribution, supply chain consulting and supply base management – Extron is a first-hand witness to this growing movement.

“There’s a growing realization that it’s not as simple as ‘I’ll just outsource and everything will work fine,’” Duggal says. “We started doing last-mile manufacturing in 2005 when we recognized there was an impending change coming about in terms of the advantages of offshore manufacturing. We turned out to be dead-on right but a little early. It’s still very early in this trend, but the market is recognizing the benefit of bringing manufacturing back onshore.”

The Power of Three

Duggal says there are three main shifts occurring that have led to this change – or rather many mini-shifts that fall under three main umbrellas.

First are the economic drivers – the factors dictating whether or not something makes economical sense. For one, the volume of manufacturing outsourced to China has led to a growing middle class there, bringing the country’s cost of living and wages up. Meanwhile, wages in the United States are relatively stagnant and have even dropped in some industries. Those two factors combined start to close what used to be a wide gap between the United States and Asia when it comes to labor costs.

The second umbrella is what Nesbit calls reality drivers – meaning the reality of both the benefits and pitfalls of a business system. Although manufacturers saw outsourcing as cost-effective in years past, many are starting to see real risk.

“You give up some control of your manufacturing when you have your product made overseas,” Nesbit says. “In many cases, you’ve now ceded a fair amount of control of your performance to a very large contract manufacturer that could have other priorities. And depending on your size in relation to the contract manufacturer’s other clients, you may not get priority. We are seeing some companies struggle through that now.”

Although working with a last-mile contract manufacturer such as Extron is similar in some ways to offshore manufacturing, Duggal says that risks are reduced when dealing with someone close to home. Communication is often easier, since distances are greatly shortened and both parties speak the same language, linguistically and culturally. Duggal explains that in offshore models, “details lost in translation will often lead to a loss in quality.” Further, theft of intellectual property is not only frowned upon in the United States, it’s a crime that often leads to conviction.

“IP theft is a major cost that hasn’t been fully quantified, but there is a definite cost,” Duggal says. “It’s also something that we in America find very unpalatable, when it comes to be stolen from. It has caused products to become less profitable and gives birth to competition outside of the company. You create competition by giving away IP.”

The third umbrella in this trend are geopolitical drivers. Duggal says many people are realizing that what seemed like an innovative solution to arrive at lower costs and higher profits has put some communities at risk.

“There’s a realization that by outsourcing, we’ve decimated our own communities,” Duggal says. “By making our neighbors weaker, we are making our communities weaker. It’s a national mood that has many sub-levels. But overall, American consumers are demanding that more stuff be made at home.”

Tailored to the Trend

Extron describes itself as a clicks-and-mortar solution to last-mile contract manufacturing. With robust supply chain software and a 120,000-square-foot manufacturing facility, Extron handles the part of the manufacturing process that happens in the final stages of the supply chain. It’s where subassemblies, semi-finished goods and other components form a finished product. Nesbit says its services address these three major issues – economics, and manufacturing and geopolitical realities.

“All of Extron’s business lines revolve around these market realities,” he says. “Last-mile manufacturing services means that we take the last parts of the supply chain and instead of having everything made in Asia, the client can do some of the manufacturing there, but we do the final assembly and configuration here. It allows the client to minimize inventory, improve speed and improve flexibility by doing those final steps here onshore, closest to the point of consumption.”

By moving at least a portion of the production back to the United States, Duggal says manufacturers can decrease risk in all three categories. For instance, when considering economic drivers, a more equal playing field in terms of labor costs and a sharp increase in transportation costs make it easy to understand why manufacturing closer to home is an attractive move for some.

It also resolves issues in the second category – reducing IP risk and leveraging communication so clients can have more control over the manufacturing process. It also eliminates lengthy lags in delivery.

“Say there’s a consumer device that takes a beating in the consumer’s home,” Nesbit says. “They return it to the company for repair. One option is for the company to send it back to Asia and then have the manufacturer in Asia repair it and send it back here. They may be able to do it more cheaply, but you lose the speed of execution and proximity to fault discovery. Doing it here means that the client can observe what we’re finding while we’re doing that repair work. People realize today that when you’re offshore, you lose contact with your business. But when you’re close to the manufacturing process, you can become very engaged and manufacturing becomes very strategic at that point.”

By operating in Milpitas, Calif., and employing 100 people, Extron is also addressing the third concern it sees arising from offshore outsourcing – the consequence of weakening the U.S. workforce. But with more manufacturers looking to bring their operations back onshore, Duggal sees this beginning to change course. It ships $1 billion in products each year on average from its facility and expects to double this year.