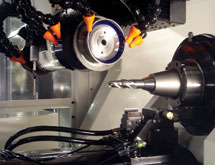 It sure doesn’t hurt business when you’re practically the only game in town. Ontario-based F&J Cutter Grinding Service is celebrating its 40th anniversary this year, but for the last 15 years, it has been taking quick-turnaround orders from manufacturing clients who need custom cutting tools – a service few other toolmakers provide, according to F&J vice president Francesco Alonzi.

“There are other competing companies making specialized tools that sell directly to industrial stores and a few of the big machine shops, but there is very little made-to-order work being done, especially as quickly we do it,” Alonzi says. When manufacturers request a unique tool configuration, F&J can produce it in several days.

The shop creates entirely new cutting tools weekly, with order sizes ranging from five to 150 pieces. The majority of F&J’s client base of more than 500 are repeat customers, but they may only place orders every few months as special needs or changes in manufacturing arise.

Aerospace, automotive and injection molding industries each make up about a third of F&J’s business. The company also serves an assortment of customers in the construction, mining, nuclear and woodworking industries. About 95 percent of F&J’s clients are in Canada – ranging from Newfoundland to Vancouver – and the rest are in the United States.

One such Canadian client is Koss Aerospace, based in Mississauga, Ontario. Koss manufactures structural aircraft components and assemblies for commercial and defense aerospace customers worldwide. Its clients include Boeing, Bombardier, EADS and Gulfstream. F&J provides Koss with precision carbide endmills – a type of cutting tool that can cut in multiple directions – with custom radii.

“F&J” are the first initials of Frieda and John Alonzi, Francesco’s parents, who founded the company in 1974. John learned the tool-and-die trade in Sora, Italy, and moved to Canada in the 1960s. After working as a machinist for a few years, he decided to go into business for himself – sharpening, modifying and repairing cutting tools with a single machine in his garage. His wife, Frieda, soon became his office manager and partner. “In this kind of business, what you’re selling is precision, quality and unparalleled service,” Francesco says, and that’s what the senior Alonzi delivered. Over the years, the business grew and so did the space required, and it moved into larger and larger facilities.

F&J is still a small operation, with 10 employees, several computer numerical control (CNC) machines – which are used to make custom tools – and more than 20 conventional tool and cutter grinders, all in a 5,000-square-foot facility that is centrally located in greater Toronto. Jerry Bell, the general manger, has been John Alonzi’s right-hand man for more than 30 years. The F&J team has more than 100 years of combined experience in cutter grinding – a skill so specialized that is not taught in any Ontario schools. Francesco would like to eventually add another CNC machine to increase his shop’s capacity and grow the business further.

Both Frieda and John are now semi-retired, and Francesco is in charge of the company, although John is still acting president. While Francesco worked in the shop throughout his youth, he was formally employed there after finishing school at Toronto’s George Brown College, where he studied mechanical engineering.

Francesco’s first order of business was to introduce CNC machines, which enabled the company to grow considerably by doing custom work. Prior to this, F&J was limited to tool and cutter grinding with machines that had to be manually adjusted. “The technology has changed since my father started the business, and computer-controlled grinding has become possible,” Alonzi says. “With CNC machines, we can make new cutting tools from solid carbide ground rod.”

The biggest advantage of running CNC tool and cutter grinders is the consistently high quality within tolerance. It can take several hours to write a program and dress grinding wheels to perfect the first cutting tool, but after that, every tool will be produced exactly the same.

Some of F&J’s custom products include endmills, ballmills (with or without radii, chamfers and tapers) and form tools – all solid carbide – as well as step drills and window stack cutters.

About half of F&J’s business is custom manufacturing of tools. The other half is high-speed steel and carbide cutting tool regrinding services for:

“The beauty of what my father started and what I have introduced is that they coexist harmoniously,” Alonzi says. “Certain tooling can only be ground, repaired or modified using technology from the old world. But I also produce tools of such tight tolerance and unique geometry that they can only be made with CNC machines. Thus, our work relationship opens doors to a wide range of customers who often end up using us for all of our services.”