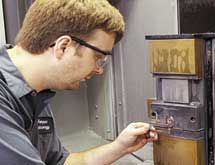 Many of us have met a person in our life that reminds us that our course of action was the right way to go and offered hints when the de­sired path might not be for the best. Whether it’s a parent, teacher, older relative, a sibling, etc., a solid mentor can deftly guide an advisee toward success that could surpass their own.

But it’s a rare occasion that an as­p­i­ring entrepreneur can partner with the person who taught him everything about his trade when embarking on the journey to start his own business. Joey Farmer gained that valuable tool in 2001 when his teacher from the Tennessee Tech­nology Center (TTC) – Jack Hooper – became a partner in the merger that formed Fampec Tech­nology LLC.

Farmer met Hooper in 1994 when he enrolled at TTC of Clarksville, Tenn. After graduating high school, Farmer knew he wanted to run his own mac­­h­ine shop, and he made that clear in his en­trance interview at TTC, with Hooper in tow. A one-time business owner himself, Hooper took it upon himself to give Farmer business management assignments, such as exercises focusing on quoting and estimating.

Farmer founded his own company – Famco Machine Co. – after graduating from TTC in 1996 at his grandparents’ farm with one machine and classmate David Cuevas, who is still in the business today as the plant manager.

All the while, Farmer says he stayed in touch with Hooper on a weekly – and sometimes daily – basis with questions about running a business. “When I was concerned about finding an employee or deciding on buying equipment, he would consult with me,” Farmer says.

In 2000, Farmer was approached by an electronics assembly company based in Murfreesboro about a merger to deliver turnkey mechanical assemblies. This was when Hooper made the transition from trusted advisor to business partner, and Fampec Technology was born. Today, the company has 22 employees and serves customers in the military, medical and energy sectors out of its 10,000-square-foot facility.

As a result of their unique rise to the helm of their own company, Farmer and Hooper are big believers in the value of a solid education. In fact, Fampec Technology continues to mine for potential employees from TTC as a way to infuse the company with youthful diversification it might otherwise miss when hiring from a pool of industry veterans.

“Most companies talk a good game, but they don’t go out of their way to accom­modate students,” Hooper says. “We made that a main thrust of our operations.

“The diversification is a key to our success. People buy these machine tools and tend to do their business with their own: young people with young people, or medical working with medical,” he says. “Machine shops, though, are on the lower le­vel, and jobs should be born out of those industries.”

While the relationship between Hooper and Farmer has been a success, that doesn’t mean Fampec Tech­nology hasn’t seen its share of tough times. After the attacks of 9/11, business plummeted for Fampec, and the company had to deal with sensitive issues like debt recovery and layoffs while attempting to ride out the tough economy.

Farmer had to make numerous difficult decisions for the sake of his business, but he had Hooper’s wisdom at his beckon call every step of the way. Farmer admits that Hooper’s guidance helped him through many arduous times in those days.

“Jack helped me evolve from a machinist to a business manager, and that was really the most im­portant thing for me,” he says. “I was able to make mistakes and talk about them and work through them. He witnessed me make mistakes and I learned from every one of them be­cause of him.”

Farmer and Hooper eventually righted the ship and they are poised to make a profit of about 6 to 8 percent in 2009 after absorbing losses from 2006 to 2008. However, they couldn’t do it alone. John Reding – better known as “Uncle John” within the Farmer family – entered the picture as a silent partner in 2006, delivering a solid foundation for Fampec’s sustained success.

Even with the ups and downs, Hooper says he is glad he’s been along for the ride. Although he has given up teaching while taking on a big­­ger role in the operation of Fampec, he re­mains a teacher at heart. Guiding Farmer and training new employees at Fampec serves as an outlet for Hooper’s passion.

“The whole thing to me is just another way to teach,” he adds. “I have these people who want to learn how to run a business, including Joey. This is more of a continuation of my desire to teach and the opportunity to do it. It’s more important to me than the money-making aspect.”