Back to Profile Gallery > Fecc

With a growing membership of companies and national associations, Fecc promotes initiatives to ensure policies remain feasible, long-term sustainability is guaranteed and innovation is encouraged in the growing chemical distribution sector

Formed in 1954 when the National Associations of Austria, Belgium, France, Germany, Italy, The Netherlands, Sweden, Switzerland and the UK agreed to create a ‘Liason Officer of Chemical Traders’, the Belgium based Fecc (Federation Europeenne du Commerce Chimique) took on its name in 1960. In order to facilitate the continuing dialogue on a number of 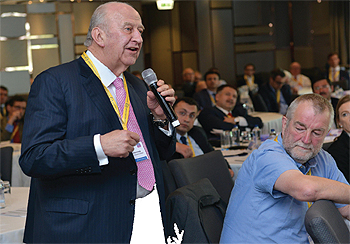 legislative and technical issues with the European institutions, Fecc’s first permanent office was created in 1973.

Discussing a major milestone in the history of Fecc, Director General of Fecc Elisa Setién comments: “The current Fecc came into being on 14th June 1998 when its General Assembly approved a new constitution, structure and focus for the organisation. For the first time, Fecc had individual direct company members, in addition to its traditional membership of National Associations.”

She continues: “At the time, Fecc’s three main objectives were to monitor and influence European legislation, to promote the chemical distribution industry and to promote responsible care. In 1999, the European Chemical Industry Council (Cefic) and Fecc signed a partnership agreement to promote responsible care throughout the supply chain; the first result of this initiative was the joint development and launch of the European Single Assessment Documents (ESAD) for chemical distributors. Meanwhile, on January 2005, Fecc statutes, which are still in force today, were published in the Belgian Official Journal.”

Today operating as the voice of the chemical distribution industry in Europe, Fecc represents approximately 1600 companies, many of which are SMEs. Contributing to innovation and sustainability, Fecc and its members add value to the supply chain through sourcing, developing, marketing and distributing a diverse range of specialty chemicals and ingredients to more than one million downstream users. These include automotive, electronics, paint and coatings, pharmaceutical, cosmetics, construction, food and nutrition industries, each of which has its own unique requirements.

For those seeking to potentially become a member, benefits of being part of Fecc include having a voice in European policy development, unrivalled networking opportunities with other Fecc members, business leaders, key stakeholders and representatives from the EU institutions and access to key industry information. Members can also track EU developments and relevant legislation thanks to Fecc’s close relationship with European legislative bodies, as Elisa explains: “The relations with the European Institutions have been a constant since Fecc was officially recognised by the EEC on 13th February 1962, when a meeting between the EEC and Fecc representatives was held in the offices of Giuseppe Caron, Vice President of the EEC Commission. Today, Fecc participates in several working committees of the European Commission and is an accredited stakeholder of the European Chemical Agency (ECHA) and stakeholder of the European Food Safety Authority (EFSA).

The number of people currently operating within the chemical distribution industry is estimated to be more than 30,000, with annual sales at approximately 28 billion euros. To safeguard the industry’s competitiveness, Fecc promotes initiatives such as responsible care, as well as good trade and distribution practices; the organisation also provides extensive information on current and proposed legislation to its members and also acts on behalf of members during dealings with the European institutions. 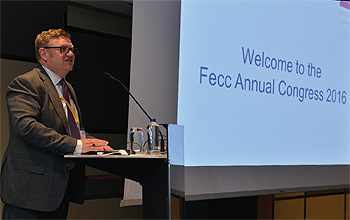 Elaborating further on how Fecc supports its member’s specific needs, Elisa highlights: “When it comes to responsible care, this enables the industry to demonstrate how its health, safety and environmental performance has improved over the years, and to also develop policies for further improvement. The Fecc European Responsible Care programme is based on eight guiding principles: legal requirements, management of risk, provision of information, training; emergency response, ongoing improvements and community interaction. Additionally, the Good Trade and Distribution Practices Committee is focused on European and World Health Organisation (WHO) initiatives, which affect the chemical distributors in the fields of pharma, cosmetics and food and feed ingredients.”

Alongside this work, Elisa notes that Fecc organises an annual congress each year, which has gained recognition as a key event that allows the chemical distribution industry to come together and discuss current issues within the industry: “From 1970 Fecc’s general assemblies were linked to Fecc congresses; the congress became an annual event after that date, focusing on contemporary issues for the industry. Over time the Fecc Annual Congress has become the leading event for the European chemical distribution industry and a key date in the European chemical industry’s calendar. The next Annual Congress will take place from 12-14 June 2017 in Warsaw and will focus on the transformation of the chemical industry through digitalisation and the innovative business models being created by the distribution chemical industry.”

Working as a platform to share experienced and knowledge, as well as to voice views with other industry associations and key stakeholders, Fecc’s programme for 2017 will be orientated around issues such as international trade, in which the organisation will closely monitor emerging markets, Free Trade Agreements (FTA’s) and the EU and United Kingdom’s negotiations surrounding Brexit.

Meanwhile, in the area of Good Trade and Distribution Practices, Fecc will continue to be involved in the EXCiPACT certification scheme in the area of environment, health and safety.

“The focus will be on the REACH 2018 registration deadline and the use of communication and implementation of exposure scenarios, as well as the provision of advice regarding the new notifications to poison centres,” says Elisa. “In the area of Responsible Care, we will update the Responsible Agreement between Cefic and Fecc. When it comes to developments in the area of ESAD, we will continue to promote SQAS/ESAD as the preferred assessment scheme for evaluating the Responsible Care and HSSEQ compliance. In other business segments, we will also finalise for the UN committee the revision of the Industry Guidelines for the Security of the Transport of Dangerous Goods by Road and will also participate in the re-drafting process of the EU’s Guideline for Operators – advocating the standpoint of European chemical distributors.”

With a busy 2017 coming up for the organisation, Fecc is certain to remain a heard and respected voice at the forefront of EU developments when it comes to chemical distribution.

Fecc
Services: Acts as the voice of the chemical distribution industry in Europe