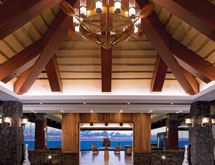 Fetzer Architectural Woodwork has experienced enormous growth in just more than a decade, growing from about $20 million in annual revenues in 2000 to $82 million in 2012. The catalysts for this growth include a loyal customer base and improved efficiency in the company’s manufacturing facilities in Utah.

“We’ve done a real good job of hiring good employees in the last seven years because we had a different focus on our hiring practices,” Fetzer says. “What we’ve found is it is a better fit to hire not just a person interested in a role to fill, but also one that can interface with other departments. This helped us hire people who fit into our organization.”

Fetzer Architectural Woodwork traces its roots back to 1909 when German immigrant Kaspar Fetzer opened a cabinet shop in Salt Lake City. In 1913, he incorporated Salt Lake Cabinet and Fixture, producing woodwork for churches and bar rooms. In the 1950s, Kaspar was joined by sons John and Percy to run what became known as Fetzers’ Inc. During the 1990s, the Fetzers made a 10,000-square-foot addition to the company’s West Temple facility that housed a finishing shop with four spray booths and a drying tunnel.

Erik Fetzer represents the fourth generation of Fetzer family ownership. He joined the company 14 years ago as the network administrator and operations manager before taking over as COO in 2010.

During Fetzer’s tenure, the company has opened two satellite facilities under the leadership of their own operations managers, including a new division devoted to retail fixtures and another that manufactures countertops exclusively. It now boasts 220,000 square feet of manufacturing space across four facilities.

“We’ve had very good clientele, so when some of our clients have gone from a few million dollars in sales to many millions a year, a very faithful clientele base helps there,” he says.

It also helps that Fetzer Architectural Woodwork has diversified its client base during the last few years. Fetzer explains that in the 1980s and ’90s, the company primarily catered to retail and libraries with a few architectural clients complementing the business. In the last decade, however, the company has expanded immensely its footprint in the architectural sector, especially with customers based in China.

One sector Fetzer Architectural Woodwork has avoided, though, is low-cost, high-volume production work to compete with overseas competition. Fetzer says this would not align with his company’s reputation for high-end quality that has been established over the course of a century.

“We’re not trying to do lower-end stuff that everyone competes in,” he adds. “We maintain high quality and on-time expectations.”

Despite the increased revenues and volume, Fetzer says his company has kept up with demand without having to hire additional personnel. He attributes this to hiring the right people at the right time as well as making investments in new equipment that increases efficiency.

“With the big growth we’ve just gone through in the past two years, there’s a tremendous amount of growth facility-wise, so we’re not looking to grow anymore,” he says. “We’re trying to take all that investment that we’ve made capital-wise and make it turn a good profit for us.

“We’re not looking for new equipment or new space because we just accomplished that,” Fetzer adds. “Now it’s about how do we make our execution a lot better than it actually is.”

Fetzer admits that a manufacturer that has been around for more than a century has to adjust its operations to survive, and those adjustments come with learning curves.

“Even a company that’s been around 100 years still has a lot of growing pains,” he stresses. “We get to bring in new systems and technology, which definitely helps, but there are still learning curves and new employees that need to get used to doing things.”