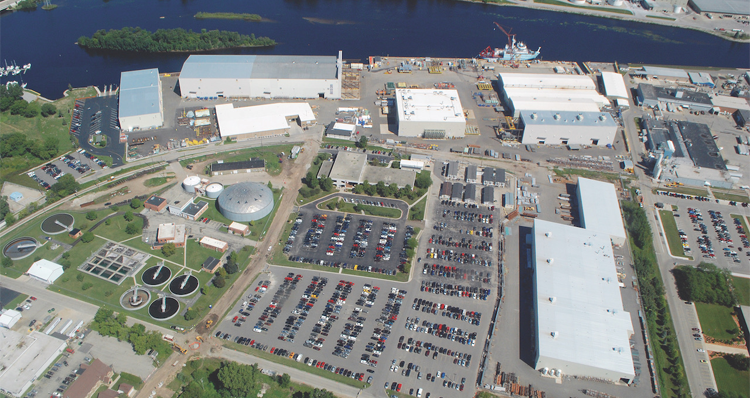 Founded in 1942 to meet a growing demand for naval construction, Fincantieri Marinette Marine (FMM) is today a world-class shipbuilder that has designed and built more than 1,500 vessels.

In recent years, the Marinette, Wis.-based company’s corporate parent, Fincantieri, has invested more than $73 million into expanding and upgrading the company’s shipyard and personnel. The company now boasts 550,000 square feet of manufacturing, warehouse and receiving space.

Fincantieri purchased Marinette Marine in 2008. The Italy-based company, which operates in the United States through its subsidiary Fincantieri Marine Group (FMG), is one of the world’s largest shipbuilding companies. Fincantieri operates nearly 20,000 employees in 20 shipyards on four different continents, and has a history dating back 200 years. The company has produced more than 7,000 ships.

Fincantieri Marinette Marine is one of three Great Lakes shipyards operated by FMB. Fincantieri Bay Shipbuilding, located in Sturgeon Bay, Wis., traces its roots in shipbuilding back to 1918. FMM’s sister subsidiary, ACE Marine in Green Bay, is an all-aluminum shipbuilder focused on building the Response Boat-Medium for the U.S. Coast Guard.

The FMG shipyards are able to leverage and benefit from the support and resources of its parent company with its staff of experienced engineers and skilled workers to build safe, technologically sophisticated ships to customer specifications, FMG says.

Fincantieri’s investment transformed FMM from being a custom builder for the U.S. Navy, U.S. Coast Guard and other clients into a full-scale manufacturing company. “We’ve gone from building unique ships one at a time to having a dedicated production line, without sacrificing quality or our pride in craftsmanship,” the company says. 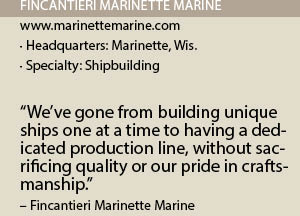 The company, in partnership with Lockheed Martin, delivered its fifth LCS to the U.S. Navy in late September. The ship will be commissioned later this year as the USS Little Rock and will replace a decommissioned ship of the same name.

“[FMM’s] shipbuilders are proud to deliver this proven warship, and we look forward to working with the U.S. Navy to continue building these highly capable ships for the fleet,” FMM President and CEO Jan Allman said in a press release.

Lockheed Martin and FMM currently have seven LCS ships in various states of construction at FMM’s shipyard. FMM’s ship portfolio also includes U.S. Navy mine countermeasure vessels and ocean tugs as well as U.S. Coast Guard icebreakers, buoy tenders and response vessels. The company has also built non-military vessels including a research vessel for the University of Alaska Fairbanks. The vessel, named the RV Sikuliaq – meaning “young sea ice” in the Inupiaq language) – was completed in 2014.

Lean manufacturing methods are playing a large role in MMC’s transformation. The company is using 5S and other methodologies to reduce its cycle time and improve its internal processes and overall product quality. This has included installing tool boards at workstations and engaging in ongoing projects such as monitoring the ways it manages and uses materials.

The company also employs modular construction methods in its manufacturing operations. Each component of a ship is built individually and then the components are assembled and welded together. Cutting-edge computer-controlled manufacturing equipment and heavy-lift machinery are used to build and assemble ships.

Along with expanding and reconfiguring its manufacturing operations, MMC is also investing in an expanded workforce and training for its employees. Training focuses on two areas: entry level skills such as steel and aluminum welding, ironworking, sealing, installing electric components and testing; and advanced skills such as welding stiffened ship panels and component module seams. Training is also being provided to managers. “We’ve developed a rigorous and well-defined process to train our supervisors in leadership and management,” the company says.