Back to Profile Gallery > First Solar 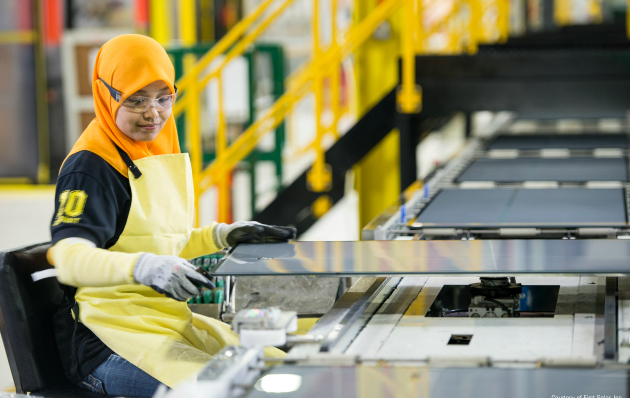 McMaster also received additional backing from John Walton and his venture capital firm, True North Venture Partners. “They gave some fantastic financial backing,” Koralewski says. “It was really John who put the money in to build the first commercial manufacturing plant in 1999.”

Ultimately, Walton took the majority interest in the company, which became known as First Solar. Today, the firm has more than 6,000 associates globally and enjoyed net sales of $3.6 billion last year.

First Solar serves a client base that primarily consists of independent power producers and owners of utility-scale power plants. “The companies that we deal with are the Southerns and NextEras of the world, as well as major utilities such as Pacific Gas & Electric and Southern California Edison,” Koralewski says. “[These are] companies that are large energy providers.”

The company’s work also takes it across the world. In addition to its Perrysburg site, it has a campus in Malaysia that houses six manufacturing plants. “We also have sales and support offices around the globe,” he says, noting that these sites are in Europe, India, Australia and South America.

Koralewski joined First Solar in 2006 after working in the automotive industry. “I was in that market for about 12 years prior to coming into the solar space,” he recalls.

He credits First Solar’s success to its approach of keeping things simple. “We have a very open communication structure,” he says, noting that its headquarters does not feature any offices. 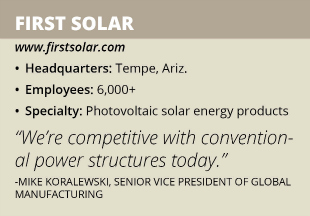 “So all of our associates, whether you’re the engineer or a CEO, sit in a cubicle,” he says. “There are no doors, so they have access to you. Communication is very open and fluid, which allows us to hear everyone’s thoughts and react very openly. Then, we can obviously create strategies and alignment around those.”

The structure of its operations also helps. “We made a decision very early on that we would locate the research and development with the manufacturing team in the same plant [in Perrysburg],” he says.

“They utilize the line for manufacturing purposes as well as R&D purposes at the same time and work together to find viable, quick solutions,” he continues. “That has allowed us to ramp up quickly, drive costs down and bring efficiency up.”

The company recently added two more lines to its facility in Perrysburg, which brought its capacity to 600 megawatts of output. “[This made] it one of the largest module manufacturing facilities in the United States,” Koralewski says.

First Solar has set nine world records in cell and module efficiency over the past five years. This, along with other cost reductions, places First Solar’s technology directly competitive with conventional energy sources, Koralewski says.

Quality is everyone’s job at First Solar, Koralewski says. The company stresses to its associates that product quality is not only important, but also “the quality of the jobs that they do in their work,” he says.

“During orientation, we do a very good job at working with our associates and expressing that sense of quality and how each of their actions can have an extremely positive impact on how the company does,” he adds. “We tie all that together through common goals for each of the associates.

“Quality builds into many of those goals so you have the right output and the right cost structures,” he says. “They all quickly understand how quality impacts them. We’ve done a fairly good job at getting it across all the work force globally.”

First Solar strives to keep its management of inventory as cost-effective as possible. “If you look at any company in finished goods, you want to have a good flow and minimize the cost impact on the incoming side without impacting manufacturing flow or orders to customers,” Koralewski says.

“It’s no different than any other company,” he says. “We want to carry as little as possible on width and we want to push as much through on a finished goods perspective.”

Koralewski is proud of the open communication and the level of trust at First Solar. “I’m also proud of the rate and speed at which we’re able to make and drive improvements across our manufacturing plants,” he says. “[We’ve seen] just fantastic success.

“Not everything’s been easy, but when there has been issues the team comes out on top,” he continues. “I’m very proud of that.”

First Solar will continue to be a large player in its market, with the introduction of its Series 5 and 6 solar module products, Koralewski says. Series 5, which will come out in 2017, will provide advantages in both speed and cost, as well as energy levels.

“Our energy is greater than that of our competitor module, on a side-by-side basis, where you’re looking at the same efficiency conversions,” he says, noting that Series 6 will be released in the next few years. “We’re excited about those new technologies. We see us continuing to position ourselves a strong player.”