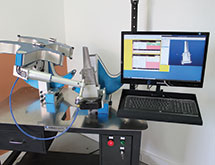 Its success finishing turbine blades for aircraft jet engines and ground-based turbine engines drove the development of a second-generation robot for the broader manufacturing market. Now, “We are talking to other manufacturers in aerospace and the industrial sector about robots that do finishing work on castings and machine parts,” Somes says.

Force Robots’ products represent a new age of manufacturing robots that use force to sense and perform their work. The technology allows manufacturers to automate processes not possible with conventional systems.

The robots excel in aerospace work with its complex, high-performance parts and sophisticated processes. Human labor is more difficult to control and a single mistake could scrap parts worth thousands of dollars, Somes explains. “There is a very high cost for error,” he says. Humans, unlike robots, are also prone to repetitive-motion stress injuries.

The company’s robots arrive at the customer’s facility fully assembled and simply need to be placed onsite. Installation takes less than five minutes. Another advantage of this type of robot is that it can work side-by-side with humans and doesn’t need to be cordoned off.

“Conventional robots work in cells which must have everything built around [the robot] to conform and arrange to it,’ Somes explains. “This makes them inflexible and a very large investment [that is] out of reach for many manufacturers.

“Our robots are portable and don’t require additional integration, so they can be placed where most needed in the plant. They require a lower investment and technical skill level to implement.”

Force Robots designs, manufactures and assembles all of its robots in-house at its Cleveland location. “Generally, the robotics industry is under the domain of Japanese and European Union companies with China coming on strong,” Somes notes. “There is not much of a robotics industry in the United States.”

However, Cleveland has a strong tradition of manufacturing and machine building. The state of Ohio has even supported Force Robots with a grant to help commercialize its innovation in support of the state’s large aerospace industry.

Force Robots makes robots that are more capable than its competitors, as well as affordable and safe to work with, the company says. “Our products are developed around the core belief that working by force is required if robots are to break out of their current narrow range of applications,” Somes says.

Working by force relieves the positioning requirements of precision and repeatability. Application of force accomplishes the work, with tool-to-part mating geometry determining the motion path. The resultant motion path tells the robot precisely where the workpiece is located, the shape of its surface and how the applied work is progressing. This permits closed-loop task performance, which is much more robust than the open-loop operation of conventional robots, which merely do the exact thing over and over.

Despite the success as a robotics innovator that it has achieved in a few short years, Force Robots is not stopping yet. Its plans include developing robots that use 3-D scanners. This is made possible by the declining price of 3-D scanners, even as their performance continues to improve. The scanners will help robots locate flaws, giving them “eyesight.”

“We are anxious to get started on that,” Somes explains. “But first, there is a lot of need we can meet with our initial system.”