Back to Profile Gallery > Ford 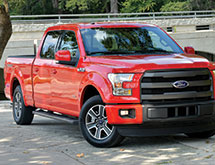 No manufacturer makes it to the top without taking some risks, and many times staying at the top means taking even more risks. For Ford, the F-series pickup trucks have been at the top of sales charts for over 30 years, but rather than follow the same winning formula with the 2015 F-150, Ford chose to take the bold step of making a significant change to the market-leading truck and switching from steel construction to aluminum. According to Bruce Hettle, vice president, North America Manufacturing, this change has created numerous ripples throughout the company’s manufacturing operations that have resulted in some positive changes for the company and the economy.

According to Hettle, Ford’s new 2015 F-150 represents a massive shift in the company’s thinking for the future but remains in line with its commitment to innovating and driving economic growth in the United States. Despite the major challenges that came with making such a big change to its most popular and enduring product lines, Hettle says Ford is seeing positive results taking shape and takes pride in the effect it is having on the industry as a whole.

The switch from steel to aluminum for the 2015 F-150 was virtually unprecedented when Ford announced the move. By dropping nearly 700 pounds from the vehicle’s frame, Ford made the F-150 more fuel-efficient and quieter inside the cab. “It hadn’t been done in the industry before, and it was a really big decision to take one of the crown jewels and make that big of a change,” Hettle says.

Changing over from steel to aluminum meant Ford had to completely redo its manufacturing process for the F-150 from top to bottom, incorporating technology at scales never before seen for aluminum construction. Ensuring that everything was in place to get the first 2015 F-150s rolling off the assembly line on time was a major initiative, starting with a complete shutdown Ford’s historic Dearborn Truck Plant and bringing it back up to full working condition within a tight time frame. Ford had to change over the plant body shop within four weeks, as opposed to the 12- to 16-week time frame for a traditional plant changeover. “We really had to plan the body shop changeover with precision,” Hettle says. “We had to make sure that we had the tech set up right.”

Hettle says the changeover was planned down to the second, and over the 2014 Labor Day weekend more than 1,100 semitrucks hauled equipment to and from the plant. Ford worked closely with the Michigan Department of Transportation to establish new traffic patterns around the plant to keep deliveries moving smoothly.

Although the technology to build an all-aluminum truck was on the market, it had never been used to the degree Ford needed it. As the highest-volume product in the company’s portfolio, the F-150 required the plant to run 21 hours a day, seven days a week. “That was an innovation because it had never been done in the industry,” Hettle says.

The new F-150 also represents a positive trend for manufacturing in the United States, because Ford has worked to expand job opportunities at its domestic plants. Hettle says the 2011 collective bargaining agreement the company signed with the United Auto Workers allowed Ford to offer a more competitive wage structure with blended labor rates for legacy employees as well as entry-level workers. By changing the wage structure, Ford has been able to bring more work back from overseas. “We felt we were in a position to bring more content inside our plants, so more insourcing,” Hettle says.

For example, Ford has brought the manufacturing of its two-liter engines for the North American market back to Cleveland from overseas plants. Additionally, the company’s F-650 and F-750 medium-duty trucks are being manufactured now in Ohio after being made in Mexico for many years. Altogether, the company’s insourcing efforts have led to the creation of more than 15,000 new jobs in the United States. “That’s a real source of pride for the company and for our UAW partners,” Hettle says.

The launch of the 2015 F-150 is just the tip of the iceberg for Ford, as the company is in the middle of its largest product launch cycle ever. Over the current 18-month period, Hettle says, Ford is launching a new vehicle for every product line. As the company undergoes this transformation, being able to transition efficiently from a manufacturing standpoint is one of its highest priorities. Hettle says Ford has learned a lot from the rollout of the 2015 F-150, and says the industry can expect to see a lot more from Ford in terms of risk-taking in the future. “We see in our plan moving forward that constant freshening of our products,” he says.