An espresso of intent

Fracino is the UK’s only manufacturer of cappuccino and espresso coffee machines, and it is a multi-award winning family owned business

Fracino represents the quality within the British manufacturing sector, and has built a reputation on its ability to design and build coffee machines that make better drinks than its competitors. The result of which has been for Fracino to become a well-respected brand on a global scale, supplying over 70 countries. The company continues to grow and improve, and has

recently made massive investments in its facilities in order to meet a growing demand for its products. Fracino is taking British made products to customers, big and small, across the world.

The company developed a new product called SUB1 and it was designed for the largest food chain in the world – Subway®. The machine scooped a high-profile national accolade for its innovation, creativity and speed in designing and supplying a bespoke espresso machine for the food company. Having started out with just one prototype, there are currently around 500 of Fracino’s machines in Subway® outlets throughout the UK and Europe. From start to finish it assisted with the smooth delivery of these market leading coffee machines, beginning with the design – that doubled the quality of the drinks being served, and continuing to technical support for staff using the machine. Having made such a success of this relationship with Subway, Fracino will no doubt continue to supply more and more of its shops. It is worth noting that the food chain boasts over 40,000 outlets worldwide, with over 20,000 in the US, and around 2,000 in the UK – so this is a massive business opportunity for Fracino, and could lead to other substantial projects with other big brands.

The company is always working on new products, making constant improvements in order to provide the finest coffee machines available. To the extent of which Fracino has released no less than 13 new machine models since 2008, and has won 17 awards since 2013. The popularity of this could be seen by the overwhelming demand in December 2014 for one of its latest models – all of the machines Fracino had manufactured for this were sold within weeks. However, due to the company’s constant investment in its factories and capabilities, it was able to keep up with demand. As Fracino continues to expand its business and increase sales in a number of markets, then it will need the facilities and manufacturing ability to meet this, and managing director Adrian Maxwell highlighted how the company is ensuring this: “There has been large growth year-on-year for us, both in domestic sales but particularly within exports. With the increased sales we have been able to reinvest into new machinery that will enhance what we can do. This includes, but is not restricted to, new finishes, new tube bending machines – all unmanned.

“As a result, our volume has increased by 200 per cent, and we have also just installed our first robot laser welding machine in the factory, which will improve our welding capacity by about 600 per cent. We also have new laser cutting machinery. All of this is a part of the massive investment we have been making over the course of the past few years, and this has a total figure of between five million and six million pounds. This has resulted in the company being turned into a real modern automated manufacturing centre, and this method is the way forward.”

Adrian continued: “The fact that we manufacture so much of the machine, while also assembling it ourselves sets us apart from many of the others in the industry, as often they have the parts made by subcontractors and are only involved in the assembly aspect. Our approach has resulted in really positive feedback from across the board, and it has even given us somewhat of a global notoriety, which we see reflected in our sales.” 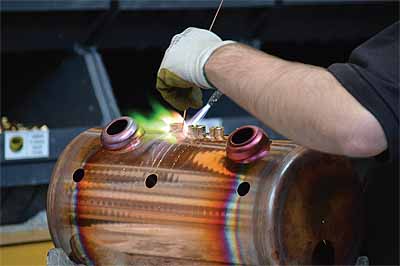 Another development that Fracino is embarking upon is not based upon its technical side, but instead is about its visibility, as Adrian explained: “Next week we start building on the factory again as we are building a state-of-the-art showroom. “We need to take the approach that car show rooms do, and to really put the product out there for people to see. For me, it is something that has to be done – we have the finance in place and have already made many improvements to the building, efficiency, and capacity side of the business – it was important to ensure that that we are presenting the machines in the manner that denotes their quality. We have always believed in reinvestment of our profits and I see it as essential to have constant investment, it is after all something we have done for over 30 years, and will continue to do so. It is as simple as this – if you don’t feed it, it won’t grow.”

It seems clear that Fracino already has in place its modern and state-of-the-art facilities that it will continue to improve. “The company has also focused on developing another area of the business,” added Adrian: “One thing we are investing in quite a lot is people – our headcount has gone up enormously in the last year by around ten to 12 people that have filled various key positions. We have had a new Head of sales and marketing join us, and my technical operations manager has progressed a great deal, as he started out with the company over 16 years ago as a service engineer and worked his way up. This really demonstrates the depth of talent at the company, and the investment we make in our people, which can then be seen in what we do and what we make,” Adrian said.

The company has every expectation that there will continue to be growth within both the domestic and export markets. Indeed, Fracino wants to achieve a 50/50 split between the two markets, and while there is a promising amount of opportunities outside of the UK, it still wants to maintain a strong position at home. It also will be increasing the reputation of the brand as part of the high-end machines category, which the company believes its quality denotes. Another aspect of this is that Fracino will be aiming to break the idea that some consumers have that if a coffee machine has been made in Italy that they are inherently better than one made in Britain. Instead it wants to prove that the British manufactured coffee machines by Fracino are not just as good as, but are actually superior.