Back to Profile Gallery > Furmanac

Furmanac was established by its founder Reginald Hiliard in 1968. Initially starting as a furniture component supplier, it developed an adjustable ‘Care bed’ in 1987. In 1997, then Managing Director now Chairman John Hilliard developed and manufactured its first electric adjustable bed frame before introducing the MiBed motion intelligent bed brand, an item that makes up 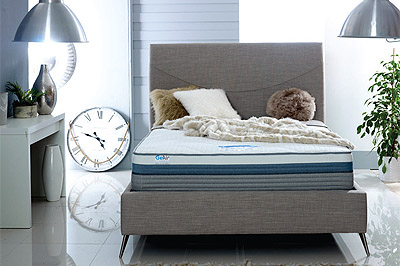 60 per cent of the adjustable bed market. During this time, the company grew year on year – in 1998 Furmanac opened a 3000-square foot factory in Coleshill, but by 2010 Furmanac acquired a factory in Kingswinford that was 40,000 square feet. In 2015, the company was one of 1000 companies to be given the 1000 Companies to Inspire Europe award by the London Stock Exchange and a year later Buzz Pattar took over as Managing Director.

Prior to taking on the role of managing director, Buzz worked closely with his predecessor John Hilliard as Production Director. In the years in which he held this position, he not only gained invaluable knowledge and insight into the history of the company, but he also got to witness first-hand the changes it was undergoing at the time: “The business was growing more and more. In 2008 turnover was around £4.5-5 million. However, it looked like we were at a standstill and growth was not where we wanted it to be,” he remembers.

In 2009, a problem then emerged in the shape of the economic downturn. The management team had a difficult decision to make and then realised Furmanac could benefit from diversifying: “We realised we had the skill to make a more premium form of bedding and that was when we introduced the Hestia brand for independent retailers. In 2009, manufacturers didn’t generally think of supplying white label goods for the independent retailers due to cost and managing the large variation. The brand grew organically and it developed because we were flexible and able to give people a product that they wanted,” Buzz insists.

It was then, in 2012, that John, Buzz and the management team identified what was hampering Furmanac’s progress at the time and the direction that they truly wanted to take the company in: “At the time we were both a manufacturer and a distributor of sofa bed and chair mechanisms. We recognised that we had not been putting as much energy and effort into said mechanisms as we were focused on manufacturing beds. We had learnt a lot about chair mechanisms, including their construction and upholstery, over the years and realised how much more there was to be gained by concentrating on the finished product so we re-focused our attention on manufacturing upholstery as well as beds. We could see that there was more to be gained when you were fully in control of your own product range by bringing the manufacturing in house as previously shown whilst manufacturing adjustable beds. This spawned the MiChair range which was based around the mechanisms we previously used to supply, which has proven to be very successful.”

In 2014, the Hestia Motion brand was launched. Clearly different from the adjustable beds that Furmanac was chiefly known for, the management team deliberately ensured the range was marketed in a different way from MiBed and its other adjustable furniture products: “When we launched Hestia Motion we didn’t want people to think of it as an electric bed associated with the mobility market, instead we wanted to appeal to the whole market. For example, the Salisbury is more of a lifestyle product. It has a higher weight capacity than a MiBed as it is commonly bought by two people sharing one mattress who want to relax in bed reading or watching TV. It also has a built-in under-bed light, so if you have to get up in the middle of the night you can turn on the light using a wireless remote. The bed can even be controlled through a smartphone interface such as Android or Apple.” Buzz describes.

Happy anniversary
With the company about to celebrate its 50th anniversary Buzz believes this is a time both for reflecting on past achievements but also for building towards the future: “It is easy to get caught up with what is happening right now, but we also wanted to look at what we achieved and the successful, fruitful relationships we have forged with our key suppliers, companies such as BSJ Fixings and Kayfoam, and how we have grown in size and stature together. One thing we are looking at is launching a special edition model to mark the anniversary. We also want to donate some of the revenue to charity as way to say thank you and give something back,” he proclaims. 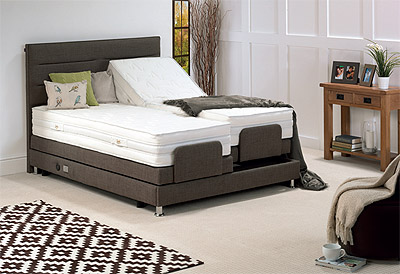 Buzz feels that Furmanac has endured because it offers what people want: “We are pretty much a one-stop shop, providing what you would want to buy from a furniture manufacturer for all age markets such as upholstered bed frames, rise and recline chairs, adjustable beds and luxury sleep systems. In terms of manufacturing as far as we are aware we are the only company manufacturing frames from start to finish on a volume scale in the UK,” he confidently states.

The company has also developed innovations such as the ChiliPad, a heating and cooling pad that uses water rather than electric elements, something that Buzz decided to incorporate into the Furmanac furniture range. “At first you think it could leak, but what you have to be aware of is that the tubes are tiny and when you lie on them you can’t feel them. The great thing about the product is the ability to cool, which an electric blanket cannot offer. Originally it was only going to be built in with our mattresses but after customers demanded to have it separately we decided to sell the ChiliPad as a stand-alone product,” he outlines, giving a practical example of how the company is flexible and able to adapt to consumer demand.

The company is also working with a number of key suppliers in the development of its new mattress bedding ranges. The ‘Nature’s Comfort’ is a new range of natural, tufted mattress and although they are keenly priced are still full of sumptuous materials such as wool, cotton and Cashgora commonly used by premium bedmakers.

Furmanac has worked with its supplier Kayfoam to introduce an advanced new component called GelAir, a new type of foam that is durable, supportive and extremely breathable. This will be featured on its standard bedding range aimed at end users who are seeking a cooler, comfortable alternative to memory foam. It will equally feature on its range of adjustable beds which, due to the very resilient construction of the foam, will be aimed at customers who spend a long period of time in bed.

The company will continue to develop its skill in not only mattress manufacturing but also in upholstery with its Upholstered Bedframes. Its new designs showcase a variety of styles and are featured in exquisite fabrics. The top end model is available with a 6000ct pocket spring support unit for that added comfort.

An area that gives Buzz cause for concern is what is likely to happen over the course of the next 12 months. While Brexit is a factor in terms of uncertainty he acknowledges that there are other factors the company will need to deal with: “We know that trade is going to be tough, but what we can do is focus on what we are good at and this is what our customers want us to do – make a great product!” Buzz exclaims. As the company goes into its 50th anniversary it may be a difficult time economically but if the company can maintain the drive shown by the likes of Buzz then it is likely Furmanac won’t face the future lying down!