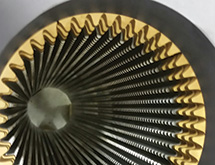 For most of its 73-year history, General Broach Co. has been known as a manufacturer of broaching machines and tools for the automotive industry. But a decade ago the company realized that to grow it needed to dive into new markets. Over the past nine years, the Michigan-based company has invested more than $5 million in capital equipment and CAD software to increase its production quality to meet the precision demands of the aerospace industry. Entering this industry helped General Broach become one of the leading perishable tool manufacturers in the world.

Making the shift to the heightened requirements of the aerospace industry necessitated a culture change for General Broach. “I’m most proud of the employees and their efforts to adapt to an ever-changing global market,” General Manager Larry Stover says. “Their jobs are getting harder to perform because of the type of quality everyone expects. They adapt to that and they are open to new changes.”

General Broach traces its roots back to 1942, when the Eklund family founded Wayne Production Broaching in southern Michigan. Today, the company is owned by Utica Enterprises Inc. General Broach has always valued its position as a leader, and it was one of the first broaching companies to achieve ISO certification in the United States and continues to be on the cutting-edge of technological advancements. “We try to be the leader for the next generation,” Stover says.

General Broach has a team of highly trained staff members in manufacturing, quality control and inspection who can provide a full range of broaching tool services to its metalworking customers. The company has five divisions: aircraft, broach tool, broach machine, production and electrical discharge machining. Many of its clients produce engines for the aviation industry and gears for the automotive industry, but General Broach also supplies machines and tools to a variety of other markets, including firearms, agriculture, appliances, energy, hand tools, military, oil drilling and marine.

The company has two facilities, both located in Morenci, Mich. One plant does all of the soft machining for the  broach tools, production broaching and broaching machines while the other specializes in the finish grinding for all the broach tooling.

Innovation has always been a core principal at General Broach. In the 1970s, the company developed blind spline broaching; a process of tooling in stages to progressively cut the form deeper until it reaches its final form. General Broach’s ability to refine techniques and develop new processes continues. Pot broaching, which cuts the outside form of a part, has been around for more than 70 years. But in 2007, General Broach evolved pot broaching so a part could be guided all the way through the cutting action, an advancement that achieved better accuracy and earned the company a U.S. patent in 2011.

Stover credits his workers with providing the backbone that make General Broach’s innovation and customer service possible. “I always think a company is only as good as its employees,” he says. “We have a great team assembled here of technical support people in engineering, machine assembly and machine services.” General Broach’s ability to engage employees has contributed to the company’s reputation for quality. “We feel our quality program is second to nobody and we’re constantly trying to upgrade,” Stover adds.

That employee engagement frequently occurs at the manager level. General Broach department heads hold monthly meetings to set goals as a group. Each meeting tackles a specific subject, such as marketability or customer service. Employees are encouraged to bring ideas to those meetings where the group can vet them.

During a meeting that focused on marketing, the controller pointed out that the company’s website was not user friendly and did not display properly when viewed on smartphones. The website was developed in 2007, before Internet-enabled phones were common, and was not designed with a phone screen’s dimensions or capabilities in mind. To better reach customers on their smartphones, General Broach completely redesigned its website to make it scalable to every device. The new web portal launched in November.

Elevating the company’s quality standards and production accuracy was one of the most challenging aspects of transitioning to aerospace industry standards. But General Broach was able to successful meet that challenge. In 2012 the company won an award from aerospace manufacturer Pratt & Whitney for achieving a rejection rate of less than 1 percent for the year. However, General Broach is looking to take its quality control procedures to the next level using PSQ9000 software from Integrated Solution Providers.

Once implemented, the software will increase General Broach’s visibility into its manufacturing and quality assurance process, a requirement of changing aerospace industry AS9100 certification. The software will create one company-wide database that anyone at General Broach or its suppliers can access and will send out notifications whenever a change is made. “Salesmen regardless of where they are in the country will be able to communicate with customers and log that into the system,” says Matt Slovacek, corporate director of quality assurance.

That accessibility and visible database will allow General Broach to eliminate the need to chase after loose ends. Ultimately, a more efficient system will reduce costs relating to quality management and result in a better experience for customers. “World class companies develop systems like this,” Slovacek says. “That’s what General Broach is working toward.”

General Broach is also finding ways to create more efficiency in its supply chain. The company follows lean practices and avoids creating inventory wherever possible. By working with suppliers, it has set up a vending machine system for frequently used products like milling inserts, drills and mills. Instead of ordering supplies that sit around, the vendor installed a vending machine at General Broach’s facilities and filled it with frequently used tooling. When one wears out and another is needed, the employee simply walks over to the machine, orders the replacement and receives it immediately. “We found it an advantage for us because before we might have $30,000 of that item on shelves,” Stover explains.

The company maintains its high standards in manufacturing products while treating its employees and customers ethically. “We do business with integrity,” Stover says. “We don’t try to cheat the system.”

As a technically savvy company, General Broach believes in packing the most value into its products so they last and reduce the customer’s cost of production. “We feel we’re successful when they have success doing that,” Stover says. “It’s all about taking care of your customer.”