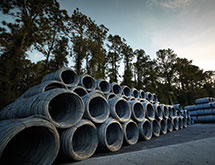 After more than 110 years, Gerdau stands as one of the world’s leading suppliers of long steel. The company transforms millions of metric tons of scrap into steel every year.

Gerdau started operations as a nail factory in Port Alegre, Brazil, in 1901. Since then, the company has evolved and established a presence in 14 countries, including the United States, Canada, Mexico, Brazil and Argentina. Gerdau employs 45,000 people and has an installed capacity of more than 25 million metric tons of steel. It is the largest recycler in Latin America and one of the largest recyclers in North America.