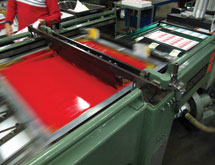 The U.S. presidential primary  season and campaign are well underway, and regardless of which candidates win their elections, Gill Studios Inc. can look forward to a landslide.

“Our biggest rush isn’t around Christmas – it’s really around the political elections, the primaries and then the general elections,” Director of Marketing Carl Gerlach reveals. “In a political year – which would be an even-numbered year – the two or three months prior to the November general election are busy for us. Then the primary season – primaries vary across the country, but a lot of them are in April. So the month or two prior to that April may be our busiest.”