Back to Profile Gallery > Goodrich Aerospace 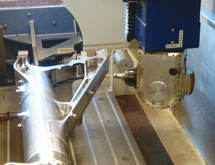 Machining landing gears from massive forgings – some of which are as heavy as a passenger automobile – requires a multitude of vertically integrated operations, from machining the forgings to heat treating, finishing and assembling them into landing gears. Supporting a variety of commercial programs for aircraft manufacturers such as Airbus, Boeing and Bombardier requires a high level of internal manufacturing capacity along with the ability to accommodate adjustments to production rates in accordance with customer demand.

“We are currently managing very high volumes in our business,” explains Tim Whittier, director of government relations for Goodrich’s Canadian Landing Gear locations. “We procure the forgings, and we machine the forging before heat treating and after heat treating. We do the metal processing and finishing and complete assembly of the gear train. So we’re vertically integrated through this process.”

The landing gears for a Boeing 737 can weigh as much as 1,200 pounds, Whittier says, while just one gear for the larger Airbus A380 can weigh almost 5,000 pounds.“So you’re moving some pretty massive pieces of equipment and hardware,” Whittier points out. “It’s not like in the automotive industry where things are reasonably small. Our single-cylinder starting weight is four times the weight of any passenger car. A single-cylinder forging can weigh anywhere from 2,000 pounds up to 14,000 pounds.”

The turnaround time on such a part can vary from five weeks to four months, Whittier calculates. “That’s just the manufacturing process,” he remarks. “Beyond that, you’ve got the material acquisition time frame.”

“Some of these forgings have an 18- to 24-month procurement time,” Site Director Randy Corey points out. Forging suppliers receive the steel as ingots and then melt and forge or drop forge the parts.

“Those are the typical lead times in the industry,” Corey maintains.

The More the Faster

Because of the hardness required of the metals used for landing gears, machining them takes a long time. Just doing the rough profiling machining operations can take anywhere from 30 to 120 hours depending on the shape of the part. To speed this production process, multi-spindle machining centers were developed by the industry years ago. With these, multiple forgings are placed on each spindle and machined.

“ In the past, the equipment was very large, with three- to six-spindle machines,” Corey says. “They used to build larger machines with more spindles to try to get the volume up in the same time periods. There’s an ultimate limitation in that those machines don’t utilize the latest technology in five-axis machining and the latest cutting tools. So you’re stuck on machines that are slower and can’t get the latest technology. In moving to single-spindle machines, you can use new five-axis software. So the five axes are moving simultaneously. Inserts are being designed for much higher feed rates and cutting rates and improvements in cutting times.”

When the speed of movement is critical, size matters. “The six-spindle machine is three times the size of a house,” Whittier asserts. He estimates it is 40 feet wide by 130 feet long. “There’s only so fast those machines can actually move,” he emphasizes. “So your rapid transfers are 200 inches/minute instead of a single spindle going up to 800 inches/minute. You physically can’t move the mass.”

More With the Same

“When you look at our production rates on some programs, the simple answer would be we need to add capacity, expand the plant, install more machines and hire new personnel,” Whittier points out. “Clearly, a cost is associated with that. So for us – rather than simply focus on expanding capacity – we ask ourselves how we can get more out of the equipment and resources we have available to us.

“A lot of our effort has been focused on expanding our capabilities to do more with what we have,” Whittier continues. “Some efforts have been expanding capacity to address the increased production rates we are seeing on these programs, and a lot of it is simply about reducing cost. How do we improve the product both in terms of cost reduction, as well as mitigate the means to simply add capacity? That’s where a lot of our focus has been over the last few years, and we’ll continue to focus on that going forward.”

These improvements include new coatings, metal processing and environmentally friendly technologies. “In the last two years, we were expanding capacity, moving more toward single- to one-piece flow in our processes,” Corey relates. Previous methods used batch processing, profiling, machining or assembly. “We’re going largely to a much leaner approach, a one-piece flow, moving that through our shops to increase our flexibility to address the different configurations we need in the business and the different volumes.”

Those methods are enabling Goodrich to do more with the same. “What we’re finding is we can actually generate new capacity with existing hardware, and we’re using that to go forward to become more competitive, instead of the prior model being to buy more and increase staff and equipment,” Whittier explains. “With the new lean toolbox, we can actually put that capacity in place with the existing hardware and personnel and absorb the work coming forward. So it’s putting us in a more competitive position.”

The pressure on prices throughout the aircraft industry is being felt all the way up to manufacturers like Goodrich. “One of the biggest challenges we’re seeing is not just what we are doing to reduce the cost of our product – the acquisition cost – but what are we doing to reduce the overall operating lifecycle cost of the landing gear?” Whittier reports. “This is what the airlines would like to see on an ongoing basis over five- to 15-year ownership periods. We’re getting a tremendous amount of pressure from the aircraft manufacturers who say we want to pay less to purchase your landing gear.”

But price is only half the story – the airlines want reductions in maintenance costs. “What are we doing to reduce those lifecycle costs – the degree of maintenance that might be required?” Whittier says the airlines are asking. “What are we doing to improve the durability of our products over the long term, to increase the time between overhauls? How do we make our product more robust and environmentally resistant? This is a big area where we’re focusing our efforts, both in terms of the geometries and designs themselves – the materials we use, the coatings we apply. So it’s very much a coordinated effort to try and reduce weight. How do you make your landing gear design more robust so they prove to be more durable and require less ongoing maintenance over a 20- to 30-year lifespan?”

Environmental concerns also are important. Goodrich is reducing its environmental footprint and moving away from chrome and cadmium in metal finishing.

Depending on what size and type of landing gear is being considered, from two to four competitors may produce a competing product, Whittier says. Nevertheless, the pressure on price is intense. “Because it is so dynamic and the expectations of our customers increase every year, it is a highly competitive environment,” Whittier maintains. “When you look at how capital-intensive our business is compared to the amount of inventory and personnel and factor in the technological risks we assume, the returns are very marginal.”

So Goodrich being able to charge whatever it wants for a particular product because it is one of only two companies that can manufacture the component is not a viable business strategy if it wants to remain competitive. Whittier is philosophical about cost reduction.

“There’s no magic bullet per se,” he muses. “So it’s focusing on altering some of the manufacturing methods currently in place and deploying new technologies. It’s looking at advanced materials and new coatings.

“So it’s a wide range of initiatives that we’re pursuing,” he concludes. “In response to customer requirements or expectations, sometimes they’ll write it into their specifications. Other times, it’s a matter of asking us what we are doing to improve or reduce the environmental impact. At times, it may factor into their decision-making process about which supplier to go with. It’s one of those things that can work to our advantage if we can demonstrate that we’re being more proactive in that area.”