Back to Profile Gallery > Goodridge Ltd

The history of Goodridge Ltd. dates back to 1971 when Stuart Goodridge founded the company in Totnes, Devon following his return from a successful racing career in Canada. During subsequent years the business has grown into the world’s leading manufacturer of highperformance fluid transfer systems for clients operating within the OEM, automotive, defence, motorcycle, motorsport and specialist industrial sectors. “Goodridge started as a manufacturer of motorsport components, focusing on brake lines in particular. During this time we started to use a PTFE lined hose because the material is lightweight and effectively lasts forever,” explains CEO, Jon Hourihan. “This allowed us to move into providing aftermarket support during 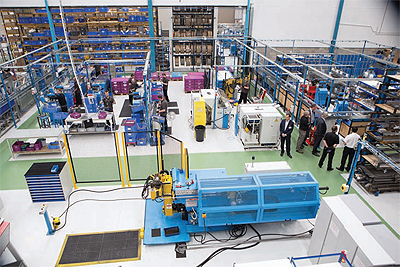 the 1970s, working primarily with motorcycles for their brake-lines, and the company remained within the motorsports and high-performance aftermarket until the 1990s. At this time, we moved into road cars, working with several key companies including McLaren (for the F1 road car) and Jaguar (for the XJ220), providing brakes and solutions for fluid transfer around the susp expand into the OEM side of the industry to provide products in larger volumes and between 2002 and 2014 we supplied 100 per cent of Jaguar’s brake hoses.”

In December 2013 it was announced that Rubicon Grovepoint Industries LLP had completed the purchase of Goodridge. In the months following the acquisition, uniting the UK division under a single roof was a high priority for the business, with Rubicon investing some £3 million into Goodridge over the course of the last three years. During July 2016 Goodridge’s UK operations were merged at the Dart Building, located at the Exeter Business Park, bringing 148 of the group’s 370 staff together at a single site. “Rubicon has a strategy of looking for manufacturing and industrial companies that are ready to move into the next phase of their development,” Jon details. “It was certainly the right time for Goodridge when the ownership change took place and the deal has benefited the company greatly. Rubicon has the very good attribute of asking difficult questions that challenge in terms of forward forecasting, market intelligence and holding a ‘right to exist’ philosophy. This has enabled Goodridge to continue to grow with Rubicon acting as an informed counsel, who are always happy to invest after the presentation of a logical business case.”

Further to its UK operations, during the course of its history Goodridge has established a global network of sites within regions including France, Germany, Spain, Holland, Mexico and the US. With the financial backing of Rubicon, the company announced in January 2017 that it had further extended its global operation through the creation of a Japanese subsidiary close to Tokyo. Building on a period of 28 years of successful business activity in the country via a key distributor, the formation of Goodridge Japan is intended to expand the group’s successful relationships with automotive and motorcycle OEMs, as well as top-tier motorsport teams within the Asia Pacific region. Goodridge Japan will build on the work of its long-term sales managers, Taka Nakada and Shige Sudo who take the helm of the new business unit. The team is tasked with expanding the company’s business interests within both the OEM and motorsport sectors.

“The decision to create Goodridge Japan underlines both the success of our business over the past three decades and the untapped potential in the area. Our geographical positioning will open up new opportunities for Goodridge to service both existing and new customers and provide improved technical support to those clients,” Jon comments. “I am delighted that Nakada and Sudo have joined to lead Goodridge Japan, as having people you can trust to run a unit 10,000 kilometres away is critical to the business. I look forward to working with them and also with anticipation to the planned exciting developments for Goodridge Japan during 2017.” 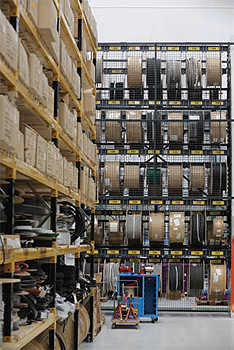 The global presence of Goodridge presents a key strength of the business, which enables it to interact directly with its clients to rapidly deliver high-performance transfer systems. With its existing global facilities and the continued support of its Rubicon parent, Goodridge is in an enviable position to take advantage of new activities within both new and current markets. “The strategy of having a global network of local subsidiaries has proven to be highly beneficial to us. It is clear that customers are aware that a local presence allows us to provide quicker and more proactive support, which is something we are very interested in maintaining, and expanding. We have never chosen to operate through sales offices and prefer to have a local manufacturing capacity to ensure that we are able to supply directly. Having the ability to speak with customers in their own language and to deliver to them within 24 hours, as well as to being able to forecast the supply of over a million parts per year is a huge advantage,” Jon concludes. “During the coming years we will be focused on growing our business opportunities across several similar markets. Within the performance and motorsport side of the business for example, the World Rally Championships (WRC) and the TRC International Series represent an interesting platform for future growth. Goodridge is an exciting, dynamic and risk averse company with opportunities to grow within the UK, EU, US, Mexico and Asia and, if the market conditions are right, we will also consider further incorporations within new regions.”