Back to Profile Gallery > Greenville Technology 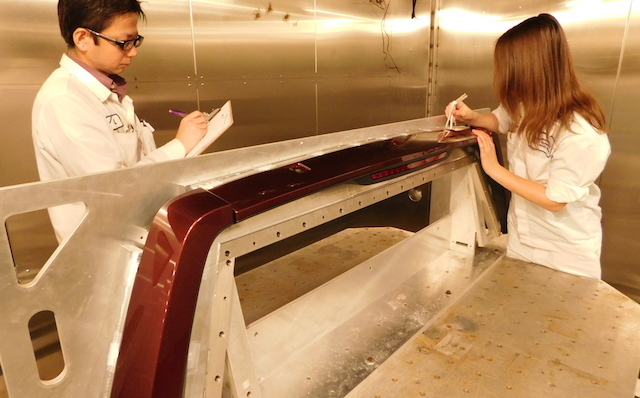 Greenville Technology is an automotive parts manufacturer specializing in the injection molding, assembly and painting of interior and exterior components for vehicles. Founded in 1987, the Greenville, Ohio-based company today is Honda’s largest plastics supplier.

“Our primary customer is Honda North America,” Executive Vice President Bill LaFramboise explains. “So we design and manufacture a wide range of plastic components that go on Honda vehicles that are made here in the United States, Canada, and also manufacture some parts that are exported to Europe and Asia.”

Greenville Technology will celebrate its 30-year anniversary this year, an achievement LaFramboise says is even better with the continuous growth the company has experienced the last five years. In addition to its main facility in Greenville, the company also opened a second facility in Anderson, Ind., in 2013 as well as an R&D center in Marysville, Ohio, in 2015.

“This 30-year anniversary makes me feel old because I’ve been here from the very beginning,” LaFramboise says, chuckling. “I was here before our factory in Greenville was even completed. Our parent company is a Japanese company called Moriroku, which recently celebrated its 350th business anniversary.  The startup team consisted of eight from our parent company plus myself. So it’s been a long road, but we have had a fairly steady growth trend.”

LaFramboise notes that the company has “had a few hiccups” along the way. “The auto industry is not always known for stability,” he explains. “One of the hiccups was when the tsunami hit Japan in 2011. That affected some suppliers of ours, which affected a lot of other companies in the auto industry. So sales were down that year as well. Other than that, we have seen steady growth to the point where we now have about $240 million in sales. And for a plastics company that’s pretty good business.”

Greenville Technology has retained most of its employees over the years, which LaFramboise says is a key to the company’s success. “We haven’t experienced heavy turnover at any period of time, which is great,” he says. “Part of that is due to the community we’re in. It’s a rural community, so people tend to come to work and stay at a company for many years. That’s one of the things we’ve enjoyed being in Greenville, Ohio.”

The company’s growth has also helped employees develop their careers. “Through the natural growth of the organization, those who may have started in an entry-level position have been able to advance throughout the organization on a technical or managerial track, which is really nice,” LaFramboise says.

In addition, Greenville Technology’s emphasis on manufacturing high-quality products for a vehicle’s interior, exterior and engine has also played a critical role in the company’s success. “The one common factor between them is that they are all plastic injection molded,” LaFramboise says. “Injection molding is our main production process, with 47 injection presses in the 480,600 square foot Greenville, Ohio facility.  There are also 3 paint lines at the original plant.  Many of our parts are functional; however, usually the strongest quality feature is the aesthetic value. Many of our products are exterior parts that get painted.  So they are the parts on the car that you see when you’re in the dealership show room, like body panels, spoilers and front grilles.

“The aesthetic product we sell to our customers is very important,” he continues. “That is why we put a strong emphasis on that through our production process. We try really hard to develop processes that build quality into the process, instead of inspecting it at the end of the process. So that has been our reputation: designing and manufacturing high-quality parts for the customers, which has kept us in business and continued growth.” 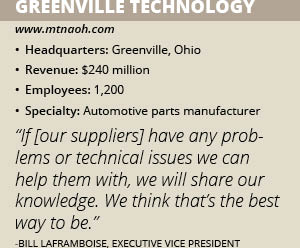 Honda, as Greenville Technology’s primary customer, has very high expectations, according to LaFramboise. “Most automotive manufacturers have this same high expectation because they are the ones putting their name on the vehicle, so this is very important,” he says. “They want return customers. It’s a very competitive business, so they’re demanding really strong quality. Secondly, they want the correct amount of parts properly labeled and delivered on time. Thirdly, they want a very competitive price. They want the best value that they can get for the dollar. Those are three fairly common expectations in any business, but the emphasis is even more extreme in the auto industry because it’s so competitive.”

With a very broad supplier base of between 80 and 100 companies, LaFramboise says its suppliers help to set them a part from the competition. “Our suppliers provide us with raw materials, tooling, fixtures and componentry, among other things,” he says. “We have longstanding, stable relationships with our supply base, some of whom have supplied us for our entire existence. So we take that very seriously and work very close with them, new or old. If they have any problems or technical issues we can help them with, we will share our knowledge. We think that’s the best way to be. To have a long-term relationship, we have to help them to be successful for them to help in our success.”

Greenville Technology is expanding its Anderson, Ind., plant, doubling its size to 260,000 square feet. “We are investing in a new paint line for that operation, so that’s our big growth for this year,” LaFramboise explains. “So it will be bigger, with two paint lines, 22 injection molding processes, and we’ll be hiring more employees, too. There are currently 280 employees in that facility.”

“We’re in the process of moving in that direction,” LaFramboise says. “There are 65 employees in this location that conduct research on materials, design and our competition. You always want to keep your eye on the market and if you benchmark through who has competitive prices and designed products, you find out how we can do either better. That’s how we think we need to be positioned. We always need to stay a half a step ahead of everyone else and watch what the competition is doing.”

The facility’s group of design engineers also collaborates our its customer’s designers. “Many of our parts have to fit inside or next to parts being manufactured elsewhere,” LaFramboise says. “So our design team designs collaboratively with the customer, which is one reason why the R&D Center is in Marysville because it is very close to our customer’s operations at Honda.”

Even with nearly 1,200 employees – and more joining the company soon –  LaFramboise states that the management team does a great job of overseeing employees among all three facilities.

“We have a good team, and it’s a solid team that’s been with us for many years,” he says. “So that gives us a lot of stability, which goes a long way and also helps us with new employees. In new employees we look for people who can adapt to a team environment and can deal with the flexibility that’s required in the auto industry. As I mentioned earlier, the industry is up and down and sideways. It gets very busy, very fast and when things slow down a “slow week” is 40 hours.

“So you have to have a certain ability to flex with that and deal with the high-pressure environment,” LaFramboise continues. “We also look for people who are dependable, reliable and want to learn. What we’ve discovered in the 30 years we have been in business is that our plant floor looks a whole lot different than it did 30 years ago. There’s a lot new technology and computers, and to deal with that and work in that changing environment you have to be willing to learn.”

After 30 years and with a growing workforce and company, LaFramboise is most proud that Greenville Technology has become Honda’s biggest plastics supplier.

“They see us as a very dependable, rock-solid part of their supply chain,” he concludes. “I think that’s something we’ve worked very hard to attain and something that you have to continue to work on every single day. I’m also very proud that we have people in the company who have had similar longevity like myself. I believe there are still 26 of us who started back in 1987, and we are all still with the company today. That’s a pretty remarkable thing and this is a company that we’re all proud of. It’s a company that obviously has been successful in the business world, but has also been a good partner in our community. It’s a very pleasant place to work.”