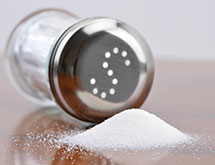 From cattle feed to petroleum to the dinner table, salt is not only in the majority of what we consume, but it’s also an important functional element in almost everything we do. It’s everywhere, and its diverse uses are immeasurable. It can be used to melt snow off driveways, pickle vegetables or tan leather. The Mexican sea salt giant Grupo Industrial Roche alone carries 10 different lines of commercial salts and six assorted types of table salt.

Also known as Industria Salinera de Yucatán S.A. de C.V. (ISYSA), the company’s industrial and commercial lines are easy to recognize for consumers because they all carry the name “Sal Roche” on the packaging. Of the 10 brands, ISYSA’s common salt and washed salt are the lower in purity lines, used for pickling, tanning, textile dying, metal smelting, iron foundation and more. Another label, “Grano Industrial,” is sodium chloride for chemical applications and pharmaceuticals, and “Mortajada” is the choice for bottling industry users. Roche ground salt is targeted for livestock and petroleum use, while the finer ground salts – finely ground, extra fine and pulverized – are recommended for food, pharmaceuticals and petroleum. The pulverized salt is especially useful in making bread, pasta and condiments. Roche also sells two different lines of salt for agriculture – Anisal and Anisal Plus – which are designed for agricultural use and cattle consumption.

ISYSA is Mexico’s second-largest sea salt producer by solar evaporation and is a national leader in the production of granular salt for industrial and trade use. Consequently, it is the salt provider for numerous leading companies in the country.

Similar to the industrial and commercial division, the table salt category has a variety of uses, and ISYSA’s comes in different forms, as well: shakers, grinders and bags. Under the label Sal Sol, the company offers a basic table salt sold in a bag or a shaker and an all-natural version that is free of chemical additives. Another all-natural form is sold under the label Sal Gourmet; it’s targeted for chefs, and is packaged in a glass mini-grinder. Other table salts by ISYSA include Oso Blanco, Sal Roche Martajada and Sal de Cocina Molcajete.

The company’s history dates back to 1940 when, during an exploration trip, Don Juaquín Roche discovered an area with a high potential for producing sea salt, called Las Coloradas. Located on the coast, north of the Yucatan Peninsula, it is the same salt marsh that was used by the Mayan people 2,000 years ago. The well-known Mexican tribe used the sea salt as a dietary supplement and as a form of business. They dominated the trade by providing large amounts for surrounding areas Chichén Itzá, Cobá, Uxmal, Edzná and Tikal, as well as areas further away such as Copán, Izabal and the Caribbean islands.

A few years later, in 1946, the explorer founded the Salt Industry of Yucatan S.A. with the help of his brother, Roger Martinez Roche. During its first decade, the company obtained salt by traditional concentrated extraction techniques. Roche raised 5,000 tons of crops per year to be transported by sea to the ports of Veracruz and Yucatan. Later, the markets began to demand high-quality electrolytic salt, and ISYSA adapted and improved its manufacturing processes to achieve the quality required by its customers.

In 1949, the company installed its first high-vacuum refinery, which expanded its range of quality laboratory products and table salt. With the introduction of new technologies in 1954, the harvest increased from 5,000 to 80,000 tons annually, and by 1970, an overland route was created to connect Las Coloradas directly with the markets of southern and central Mexico.

In the early ‘80s, production reached 500,000 tons of salt annually sold in bulk and in a variety of products and packaging. In the ‘90s, improvement systems were incorporated in saline biotechnology, which, when coupled with investments of this century, allowed a harvest of 750,000 tons annually. In recent years, ISYSA has invested a great amount of its funds into purchasing machinery and modern equipment, which streamlines processing plants and harvesting. The investments have served to increase production and add different products according to customer demand.

Today, the Las Coloradas plant is dedicated to the exploitation of this mineral, while maintaining ancestral harmony with the environment. ISYSA’s location is one of the biggest ecological reserves of national and international interest, and is considered an area of sustainable coastal wetlands of high ecological value for its variety of flora and fauna.

In  1979, the area Ria Lagartos (near Las Coloradas) was decreed a fauna refuge area. This allowed for the protection of species, with the purpose of its conservation and repopulation in the area. Years later, in 1999, the location was decreed a biosphere reserve, a title reserved for places where endangered species reside, such as the pink flamingo. Las Coloradas houses more than 559 species of fauna, 58 species of mammals, 355 of birds (179 residents, 142 migratory and 14 non-migratory), 95 amphibians and reptiles and 71 fish.