Back to Profile Gallery > Grupo Tecno 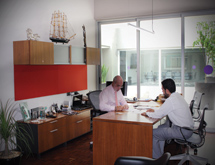 As Grupo Tecno celebrates its 30th anniversary this year, owner and President Aaron Porraz attributes his company’s long-standing success to his employees. “The largest value of this company is in those who work here,” he says. “They are worth more than my credentials – they’re very creative.”

The company – which provides corporate and public institutions with complex technological solutions – is made up of almost 400 employees whom Porraz greets individually each day. Every morning, he enters the building from the bottom floor and begins to work his way upstairs as he greets each person. “Sometimes it takes an hour to say hello to everyone,” he relates, “but people appreciate it.”

“I do it because I know it pleases them,” he adds, “but also because it gives me a chance to hear information and learn what’s going on in the company on a daily basis.” Through this simple form of communication, Porraz learns from engineers about client visits – what was done and how the client responded – and hears success stories large and small.

Maintaining a culture of closeness has many positives. Not only does it make Grupo Tecno an enjoyable place to work, but it also conveys a feeling of honesty and good values that attracts other companies to work with it.

Porraz has been at the front line of innovation on many occasions. His company – which was called Tecnocibernetica in its early years – began as a maintenance provider for the Mexican federal government. This company serviced the 32 systems – one for each state – that organized information for the construction of public schools.

Shortly after, the company branched out in its offerings and began selling Sun Microsystems products, becoming Mexico’s sole distributer from 1990 to 1995 and selling $10 million in one year.  Grupo Tecno continues to partner with Oracle, which now owns Sun Microsystems.

Today, the firm is much more than a retailer or a computer maintenance provider. “It’s more complex,” Porraz explains. “As an integrator of systems, we see the need and advise what products best suit it. They don’t necessarily have to be the same brand.” Associates have to fully understand the customer’s requirements and know all the computer systems, from Hewlett Packard to IBM, to advise which brand to use for different functions and then be able to design a network to connect them all to each other.

Ahead of the Game

Once the technological design has been created, Grupo Tecno monitors all the details to make sure every system is running as it should. Apart from design and maintenance, the company also has its commercial side, but not just for selling computers. According to Porraz, communication systems are a large part of his business. “The industry has changed from information technology (IT) to information technology and communications (ITC),” he explains.

One example he gives is technology that allows a person to be speaking on a landline and continue the call from a cell phone without interruption. “Mobile technology is an aspect that many companies appreciate,” he explains. “These are the types of things we’ve moved to.”

How does Grupo Tecno stay ahead in an industry that is constantly rolling out new products? Porraz keeps his eye on developmental roadmaps provided by manufacturers. “We know what’s coming and how things are being improved,” he notes.

Grupo Tecno associates take online courses provided by manufacturers. Most of these are free and the rest are offered at a discount for distributers. Despite these savings, last year the company invested $1.2 million in training. “It’s an investment to know what’s coming before it gets here,” he says. “Knowing about and understanding the functionality of upcoming technology allows the engineers to make informed recommendations. In fact, customers are sometimes advised to wait a few months if a new technology is coming out that would be better for their needs.”

The innovative team at Grupo Tecno is a group of pioneers.  Grupo Tecno has been the first to implement many equipment models throughout Latin America. At the time of this interview, the group had just finished installing a new Oracle system for banks that is new to Latin America and will soon be arriving in Europe.

Grupo Tecno is the largest ITC provider in Latin America. To put it in perspective: In Mexico, Oracle – one of the world’s largest business hardware and software systems – sells 63 percent of its services through distributers. Grupo Tecno’s sales account for more than two-thirds of this and it is only one of 180 providers. In other words, Grupo Tecno is No. 1 and No. 2 is way behind.