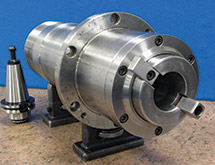 Timing can be everything when it comes to a company’s success. GTI Spindle Technology is one such example.

The 18-year-old company got its start repairing and rebuilding spindles for the machine tool industry at three locations in the United States and remains active in that market. But nearly five years ago, the company launched a new division, GTI Predictive Technology, which focuses on delivering predictive maintenance technology tools to a variety of industries, including manufacturing, construction, healthcare and agriculture.

The new division was born out of GTI’s desire to eliminate the heavy cost and complexity of vibration analysis and balancing equipment and technology. Additionally, the company had an immediate need for new equipment at its rebuild facilities as well as for onsite customers.

“Everything that we tried to purchase at that time was in excess of $30,000 and extremely complicated to use,” says Tom Hoenig, co-owner and president. “The equipment also was burdened with extremely expensive annual software licensing and updates. Our disappointment with the selection and cost of new analyzer equipment led us to write our own software and build our own device on a laptop computer.”

The company’s first step was finding a way to get precision sensors to communicate with a computer. Achieving that goal was a big step in the company’s future.

The company experimented with the iPhone and liked the touch interface and Internet connectivity, “but our feelings were a phone would not be taken seriously in the market,” Hoenig says.

“The iPhone’s small screen made it difficult to navigate complicated data,” Hoenig adds. “Four years later, people may have a different opinion. But at the time, we just felt a phone connected to a precision accelerometer would not be taken seriously.”

Instead, GTI decided to move forward using a small laptop computer, a decision it abandoned the following day when the iPad’s launch was announced. “That evening, we all saw the news of Steve Jobs introducing the new iPad,” Hoenig recalls. “It hit us like a brick wall. We all talked the next day and decided to move ahead full force with Apple’s new invention.”

The application was called Signal Scope Pro. It later was customized and named VibePro.

Indeed, the company’s solution brings together the simplicity of an iPad and the power of custom-built accessories and applications, transforming the tablet into the first wirless vibration analyzer and balancer. The program can predict when a machine tool spindle might fail or deviate from set tolerances. Additionally, GTI’s extensive application library extends beyond what typical predictive maintenance systems offer, Hoenig says.

The benefits of GTI’s predictive maintenance program are numerous and include decreased downtown, higher production rates, maintaining closer tolerances, avoiding unneeded repairs and cost savings, Hoenig says. The iPad system is designed to work with a wide array of applications, including a vibration analyzer, a machine certification and condition tool, a balancing assistant and a shaft alignment interface in a 3-D environment.

The advantages of using an iPad rather than a dedicated electronic measuring device are significant as well. They include ease of use, a common operating system, multiple sensors and applications on a single device, portability and durability and wireless connectivity.

These advantages offer significant benefits to maintenance professionals who discover an asset that requires attention. For example, data is no longer uploaded to a computer. Rather, the information is collected on the Internet-connected device and sent to the cloud so that appropriate individuals will receive it. Information also can be emailed or texted. “We’re the first company to launch a wireless application,” Hoenig says.

Knowing when a spindle requires repair is a preferred alternative to dealing with unplanned downtime, particularly during critical times of high production.

The program also helps reduce repair costs on a spindle that breaks without warning. That’s a huge benefit for large organizations that previously had to have a data analyst at every location. Now, a single analyst can review data from all sites remotely.

Hoenig says the system is easy to use, and GTI provides in-person or video training. “We’ve only the chance to dip our toe in the water,” he says.